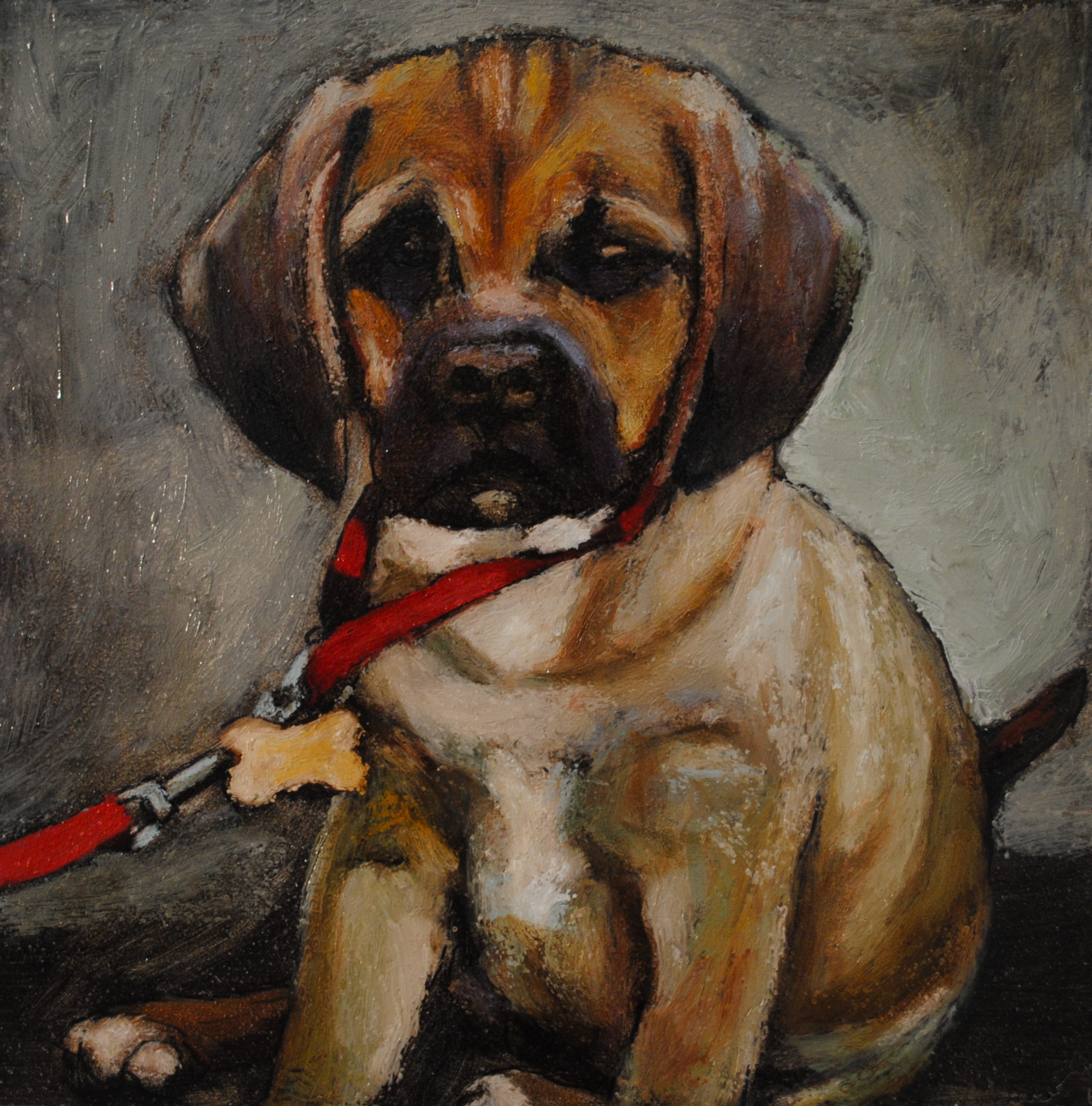 “If you want to move someone to action, you have to give them a visceral image—then they’ll know what to do,” says Marina Dervan.

Moving people to action is the premise behind an extraordinary project in Kentucky called An Act of Dog, designed to save animals in kill shelters all across the U.S.

The stark reality that few people want to face is this: 5,500 dogs are killed in shelters across the country every day. That’s enough to shock anyone, but the thought of trying to change it is too daunting for most people.

But Mark Barone and Marina Dervan aren’t most people.

The artist and his partner are the founders of An Act of Dog, an awareness movement that will culminate in an exhibit that will run 10 feet high and span the length of two football fields. The exhibit will consist of 5,500 portraits done by Mark. His subjects? The faces of dogs who have died in shelters. Mark paints them from their last photograph taken before they were killed.

A visit to Mark’s studio at the Mellwood Arts Center in Louisville can be overwhelming. Completed portraits assault the senses from their places on the walls, on tables, and all around the studio. You realize you are seeing only a portion of what the finished product will be: 5,500 portraits representing the dogs killed in just one day. Each portrait lists the name of a dog and the date that dog was killed. You see a portrait of Lacey, a mixed breed killed on October 27, 2010. Spot, a pit bull, was killed on March 6, 2011. Sam was just a puppy when he was killed on February 13, 2011.

As Marina notes, “With this exhibit, people will be confronted, forced to see what’s happening in our shelters. You can talk about it all you want, but you can’t see the reality of it until you put faces on these animals. Progressive leadership is needed, one that is committed to spending our tax dollars and donations on pro-active compassionate solutions, rather than adhering to the old and needless paradigm of killing.

“It will take Mark two years to paint what we kill in one day.”

The concept for the exhibit began when Mark and Marina were living in Santa Fe, New Mexico. They had recently lost a beloved dog, Santina: she was Marina’s first dog after being raised with cats—”She opened my whole world, meeting her”—and had been with Mark more than 20 years, seeing him through major changes in his life.

Neither was quite ready to adopt again, but they both wanted to keep dogs a part of their life. While Mark worked on his art, Marina began dog-sitting, spending a lot of time at a local park. She became interested in dog rescue, and was appalled to learn that the city shelter killed dogs for space. She started researching, learning all she could about kill shelters in the U.S.

“I wanted to understand this, understand what I was reading; it pulled me in. I spent a lot of time crying at the kitchen table. I collected images of dogs that had been killed, and though Mark was grieving over Santina, I made him look at these images. And instead of being overwhelmed and giving up, we asked ourselves, ‘What can we do about this?'”

The answer: take two years out of their lives, with Mark painting dogs and Marina running the public relations, using her experience as a conflict coach.

They looked for studio space in a city that would understand and support their work. Marina sent letters to 31 cities outlining their idea. Louisville was particularly intrigued by the project, and Mellwood Arts Center offered them a house and a studio to work in. They soon moved to Kentucky.

Mark has few illusions about what he is attempting.

“The size of this exhibit will be a freak of nature, and the only exhibit of its kind in the world. It will put the love of pets and art together. When you ask, ‘What can I do?’ now you’ll know.

“We’re all responsible for these animals we’ve killed. It’s the same as slavery, the Holocaust—it stops when people say no, and then take action.

“And if I need to escape at the end of the day, it’s because I’ve been painting dead dogs for 12 hours.”

The purpose of this work is twofold: raise awareness of a problem most of the public doesn’t know exists, and raise money to help support no-kill shelters, $20 million to be precise.

A staggering amount to be sure, but Mark and Marina have carefully plotted out the financial aspects. Marina is currently working on getting sponsorships for each painting. For as little as $25, you can partially sponsor a painting. Sole sponsorship of a painting is $100.

Their primary goal is to encourage philanthropists, both individuals and businesses, to buy a painting. The paintings will remain with the exhibit, but ownership remains with the donor.

When complete, the exhibit will include a museum, educational room, a documentary on no-kill solutions, and merchandise. Marina is now approaching various cities to house the exhibit, believing it will be a large tourist draw. They can’t say yet whether the final exhibit will remain in Louisville, but they will be very involved in choosing a city.

“We’ll want to work as a team with the city the museum and exhibit will be in,” Mark says. “We’re looking for a partner that ‘gets’ it, a city that will be proud of what this exhibit will mean to the community.”

Meanwhile, An Act of Dog has attracted nationwide interest, with stories appearing in USA Today and the New York Companion, as well as ABC and FOX News. Actresses Mary Tyler Moore and Bernadette Peters, well-known for their animal advocacy, have supported the project, as well as Nathan Winograd, author of the wildly popular Redemption: The Myth of Pet Overpopulation & The No Kill Revolution in America, and Michael Mountain, former president of the Best Friends Animal Society. Emmy award-winning costume designer Brenda Cooper says, “Mark and Marina are a beautiful combination of compassion and purpose in action. Shelter animals don’t have a voice. An Act of Dog is their voice. It’s a matter of life and death.”

Local support for the project has been huge—it’s something of a coup for this incredible project to take place in a state not known for animal compassion where our laws are concerned. Rebecca Eaves, director of Louisville’s Shamrock Foundation Arrow Fund, says, “It is my hope that this exhibit will help change the hearts and souls of the general public. We must have more compassion in this world, and An Act of Dog is a tool to spread that message. When you see this work, you will be changed forever. We can’t turn our heads in denial: we need to be part of the solution.”

Louisville resident Adale O’Brien is sponsoring a painting and says, “This project is a work of love and anger, art and dedication, by two extraordinary people. I hope others will sponsor a grand dog who no longer romps the world.”

Jessica Reid of No Kill Louisville has supported this project from the beginning.

“Mark and Marina do not mince words when it comes to their support of No Kill Louisville and the no-kill movement at large. They believe our nation’s pets deserve a better shelter model and have spoken at NKL’s events with conviction. All of us with NKL feel fortunate to have another strong voice in this national movement. They are true examples of what it means to speak out for those animals who are tossed aside and killed in our nation’s shelters daily.”

Though Mark is providing the art, Marina is a driving force with her passion and deep belief in this project. She slaps a table with a palm when she says, “If one man, one man, can paint 5,500 paintings, there’s surely something we all can do.

“It’s a Herculean task. The no-kill movement needs something to wake people up. How do you really grab them? With imagery.”

Painting an average of 10 portraits a day, Mark is scheduled to finish the project in April 2013. In the meantime, they continue to gather sponsorships through their Web site, www.anactofdog.com, and their Facebook page. They recently opened a “Barking Bank” fund whereby, Marina says, “People can make their voice matter by purchasing a painting, or getting a group of friends to jointly buy one, with easy payment options we have made available.”

When you talk with Mark and Marina, and view the paintings, you get a glimpse of the magnitude of the project and the impact it will make. And should you have any doubts, Marina firmly dispels them.

“If you are purpose-driven, focused on making a difference, it’s a win for success.”