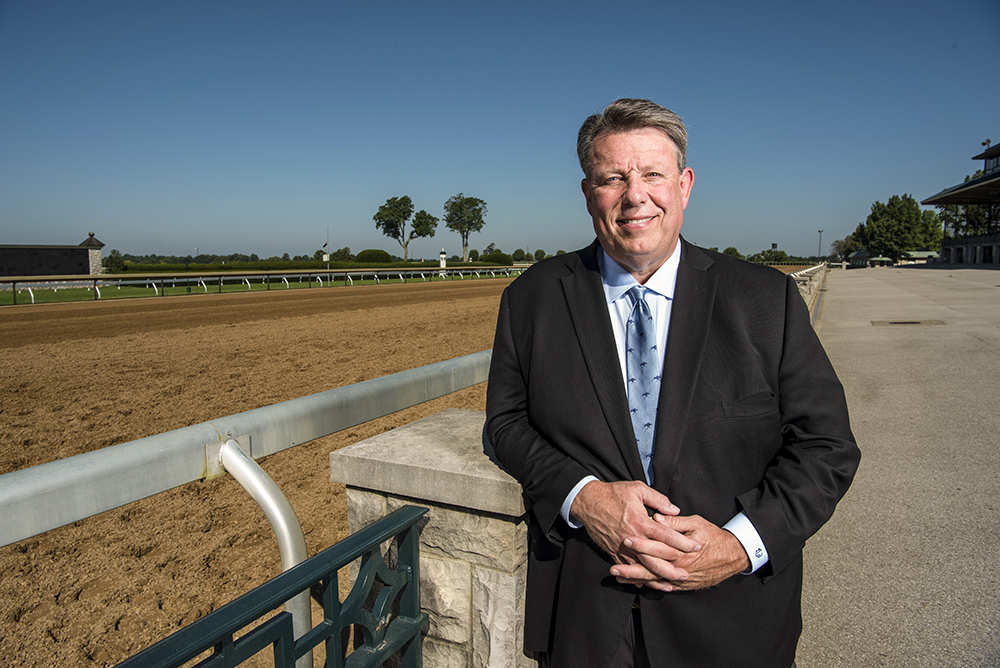 Somewhere in the commonwealth, a young woman or man listens to the contagious energy of Tom Leach as he yells, “Touchdown, Kentucky!” and says, “That’s what I want to do.”

Leach has been named Kentucky Sportscaster of the Year five times for his work courtside and in the press box. He also broadcasts from the horse track and won prestigious Eclipse Awards in 1993 and 1999 for his Thoroughbred horse racing coverage. In addition to his broadcasting, Leach hosts a daily radio show, The Leach Report; and he’s an author, having published Rich Tradition: How Rich Brooks Revived the Football Fortunes of the Kentucky Wildcats in 2009.

But the job is not easy. “Play-by-play is talking for two or three hours with no script,” says Leach. For a single football game, he spends about 23 hours in preparation, from going to practices to meeting with coaches to creating his game day charts. In addition to name, jersey number, height, weight and hometown of each player for both teams, Leach creates game notes. “I have organized notes for each team which I may or may not use during the play-by-play,” he explains. “I overdo it on the prep, so I can come to the game relaxed and enjoy it.” For the aspiring sportscaster, Leach has a few more pointers for the journey.

Make sure you’re really passionate about the job. The hours are anything but normal, and the pay is usually not good, especially when you’re starting out. A passion for broadcasting and sports can help you get through what can be some rough times and crazy hours.

Read a lot. Not just to have a good vocabulary, which is part of it, but read about the teams and the sports, and read in general. To be a good broadcaster, you need to use the language well, and be able to paint pictures with words.

Put in the work. Preparation won’t guarantee you will achieve your goals, but not preparing will most likely guarantee you don’t get where you want to go. “Tom Hammond told me once that you prepare everything you think you will need, understanding that maybe 50 percent of it is all you’ll ever use,” Leach says.

Learn from the greats, but be true to your own personality. Be natural and genuine in your delivery. If you’re not, the listener picks up on that. “If a big moment happens, I tend to get a little more excited than Cawood did, but that’s just two different approaches,” Leach says. “Whatever works for you, whatever feels natural, is the best way.”