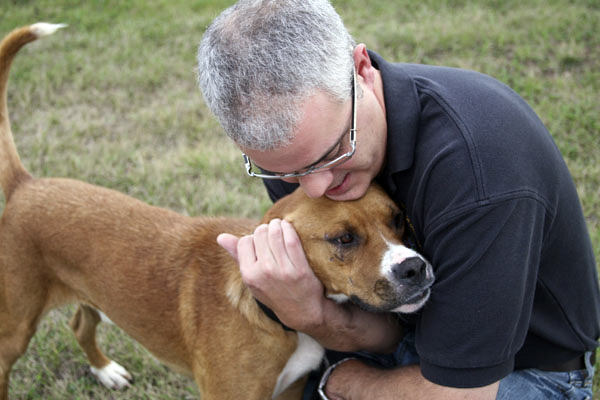 Sarah Nation likes to say that “it only takes one person to make a difference in a dog’s life.”

True, but what if there are several people willing to make that difference? A dog named Wally was lucky enough to find out.

Last fall, a dog was abandoned at a Walmart in Henry County. A boxer mix, employees there fed him, kept an eye on him, and named him. E-mails were posted about Wally on the Internet asking for a rescue or foster home. That’s when Sarah Nation took him.

“I fell in love with the pictures of his big goofy grin,” she says, giving a grin of her own. “I could see his adorable underbite, and his tail was blurred in the pictures, obviously from wagging.”

Sarah fosters animals for the Lexington Humane Society. At only 25, she’s been fostering since she was 19, and currently has 10 cats and four dogs at her home in Lexington. Wally had been at the Walmart for several weeks with no one offering to take him, so she agreed to foster him.

“Wally was so excited to have his own rug, his own food bowl, a couch to sleep on. He was a very gentle, sweet dog, and bonded with a young kitten I was fostering. They snuggled together all the time.”

Wally had been with Sarah for a month when a rescue inquired about him. Enter the next “one person” to make a difference in this dog’s life.

Cheryl Anderson is an independent animal rescuer in Minnesota. She works closely with Midwest Animal Rescue & Services (MARS) in Minneapolis. MARS is notable for taking in so-called “bully breed” dogs, and is one of the largest rescues in that state.

“We have a shortage of boxers in Minnesota,” Cheryl says. “Kentucky has a large boxer population, and frequently there are boxers in shelters there that need help.”

Cheryl found Wally on the Internet, and arranged for MARS to take Wally in. Now: how to get Wally there?

Enter Pilots-n-Paws, a nonprofit organization of pilots across the U.S. who volunteer their planes and time to transport animals to rescue organizations. Their Web site posts transport requests that pilots can check to find a needy animal in their area. Cheryl had worked with this group before, and proceeded to arrange the transport, coordinate the pilots, and send out the itinerary for everyone involved.

And so on September 26, Wally was delivered to Bowman Field in Louisville for the first leg of his trip to Minnesota. It took three separate plane rides to get Wally to his new home; James Blystone was one of those pilots, picking Wally up in Wisconsin and taking him to Minnesota.

“I took Wally on the final leg of his trip, and he was great,” James says. “If I had room at our house, Wally might not have made it to Minnesota: he was truly a grateful and very loving dog.”

A registered private pilot, James makes these trips because of the very nature of dogs like Wally.

“Abused dogs or displaced dogs have so much to teach us regarding trust and unconditional love. What allows a dog to trust again so easily after being mistreated? We as people could learn so much.”

Through MARS, Wally was placed with his new foster parents, Carrie Starr and Tom Berndt, who live in the Minneapolis area. They would keep Wally until he found a permanent home. But less than a week later, they decided to adopt Wally themselves.

“We weren’t sure we were ready to adopt, which is why we originally fostered Wally,” says Carrie. “However, he turned out to be such a lovable, well-behaved dog that we immediately fell in love with him.

“Wally is truly our best friend. He’s made our house a home, and we can’t imagine life without him.”

Luckily for Wally, many people share Sarah’s belief that “it just takes one.”

“There are so many dogs like Wally throughout Kentucky,” Sarah says. “They just need someone to take a chance on them.”