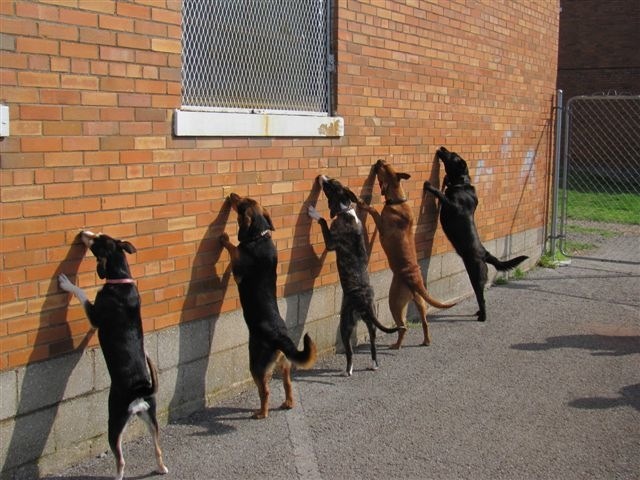 It’s a big day for a dog named Titan. He’s preparing for his AKC Canine Good Citizen (CGC) test to be certified as a dog that has completed a program in basic obedience and proper manners.

Nothing unusual about that, except that Titan is taking his test at the Northpoint Training Center, a medium-security prison in Burgin housing 1,256 inmates. In a program known as Mutts with Manners, run by the Danville-Boyle County Humane Society (DBCHS), shelter dogs are matched with inmates at Northpoint, where they spend six to eight weeks under professional training learning basic commands, socialization, and manners for living in a home.

The program began in 2009. The warden at the time contacted the Humane Society, wanting to begin a similar program to those he’d heard of at other facilities. Classes consist of five dogs at a time, and they’re proud to say they just brought in their 100th dog, Tilly.

Cheri Carbone, a trainer for the program since the beginning, says, “We’d never done this, so we started with just a few dogs. But the dogs did so well, they were immediately adopted. So we kept adding dogs, and now we even have a waiting list for dogs who have trained with these inmates.”

A professional dog trainer—called a “dog whisperer” by her fellow Humane Society volunteers—she says her job is to “train the trainers.” Once a week she supervises a training class with the inmates and the dogs they have been matched with. It is up to these trainers to work the dogs throughout the week until the next class so that Cheri can evaluate their progress.

The dogs are taught to walk politely on a loose leash with no pulling, to remain at the trainer’s side as he walks forward, turn left and right, sit on command, and remain at the trainer’s side as he changes his pace from fast to slow. They are taught to take themselves to “their place”—their assigned blanket—when told to, and to remain there until they are released. And because these dogs live with their trainers 24 hours a day, they are housetrained where the trainers live in their own facility known as the Honor Dorm. Each dog also has a backup trainer for times when the primary trainer cannot be with the dog.

The program is immensely popular with the inmates, with no shortage of men wanting to be a dog trainer. It’s not easy to be accepted—these men are carefully screened before they are allowed in, and if they are ever written up for bad behavior, they must wait at least six months before they can return.

While we cannot give last names or show the faces of the trainers at Northpoint, it is heartbreakingly obvious how much these men love their dogs, and how proud they are of what their dogs have accomplished. As Charlotta Bright Norby of DBCHS stresses, “Whenever I ask the inmates what they need, they never ask anything for themselves, only for the dogs.”

After class, the trainers are eager to share their experiences working with the dogs.

Ryan, who works with a dog named Snookie, says, “I just love animals, and this is the best kind of program they could have in a prison. It’s not just the dogs who learn, we learn too—patience, caring, responsibility, and selflessness.

Tara is trained by a man named Troy, who has obviously been quite affected by his time in the program: “What people don’t know is, dogs help us too. Now I understand dogs better. I’ve been in this program for a month, and I’d like to continue working with the shelter when I get out. The thing is, the dogs actually do more for you than you do for them. And when they leave, when they get adopted, man, I miss them. And that’s beautiful. The dogs also get us ready for the outside, they teach us how to deal with people.”

Toby is paired with trainer Jason, who has been training dogs for six years. Raised on a farm, it was natural for Jason to want to be a part of Mutts with Manners. “With Toby, I have a friend here,” Jason says. “I can take Toby out in the general population and it’s good socializing for both of us. People think, since we’re locked up, that we’re not fit for society. But the truth is, we’re providing a service to society by working with these dogs. We’re doing something positive.”

The volunteers at DBCHS have been extremely pleased with the dogs’ training, and reiterate what the trainers feel about the dogs. John Turner, co-director of the program who administers the CGC testing, says, “As a result of the trainers’ handling, all our Mutts with Manners dogs have been adopted—almost 100 dogs. I never dreamed I’d be working with inmates, and now that I know them, I enjoy them, it’s the best group I’ve ever worked with.”

And though the dogs may receive the most attention, Michelle Bonta, Northpoint’s public information officer, is quick to give credit to the inmates.

“We are very proud to have this program here. It’s good rehab for the inmates, not just the dogs. It gives the inmates a goal, and something to look forward to.”

Cheri adds another aspect to the program’s success.

“I hand-pick the shelter dogs that go into Mutts with Manners, and I try to choose dogs that otherwise would be less adoptable—maybe they aren’t the prettiest, or they’re a little older, or need more socializing. I don’t put puppies in the program—they always get adopted.”

While the training is taken in all seriousness on everyone’s part, the trainers have found a way to also have some fun. One of the tricks they have taught the dogs is to line them up in front of a prison wall, where they jump up and put their front paws on the wall. They call this “assuming the position.”

Snookie, amazingly enough, can read flash cards. When her trainer shows her a sign that says “sit,” without the trainer saying a word, Snookie sits. She can read “speak,” “come,” and “stay,” and at the end of her performance, takes a bow.

Something else the trainers do to entice adopters of these dogs is keep a personal journal on their dogs. Not only does the journal include the dog’s history and medical records, but also thoughts and observations regarding the dog’s likes and dislikes, personality traits, and how well they did during their training. Some of their notes are poignant about the dog they’ve become so attached to.

The journals go home with the dogs, making an already easier transition even better for the dog and its new family.

While the dogs are of course the focus of the program, there’s no denying the benefits the inmates have received also, even those not in the training program. Bob Milby, who supervises the trainers’ dorm, says, “We can take the dogs out among the general population, and everyone gets a chance to meet and pat the dogs: it de-stresses the yard. I see the attachments made, and how proud these inmates are of their work.”

Charlotta adds, “Being in prison, you can’t make any decisions, you have no control over your life. Working with dogs gives these inmates some control. Maybe before, they had nothing else to be proud of. Now they do.”

There’s no doubt the volunteers at DBCHS have been thrilled with the program. As Cheri notes, “I leave this place after a training session, and my feet don’t touch the ground for a week.”

To thank these inmates for participating in this story, here is a list of the trainers and backups and their dogs at the time this story was written: John/Phillip (Titan); Troy/Bobby (Tara); Ryan/William (Snookie); Hector/Terry (Tilly); Jason/Connie (Toby); and alternate trainers Charles and Jeffrey.

For more information about adopting a dog from Mutts with Manners, contact the Danville-Boyle County Humane Society at (859) 238-1117, dbchs@bellsouth.net, or www.muttswithmannersdanville.com.