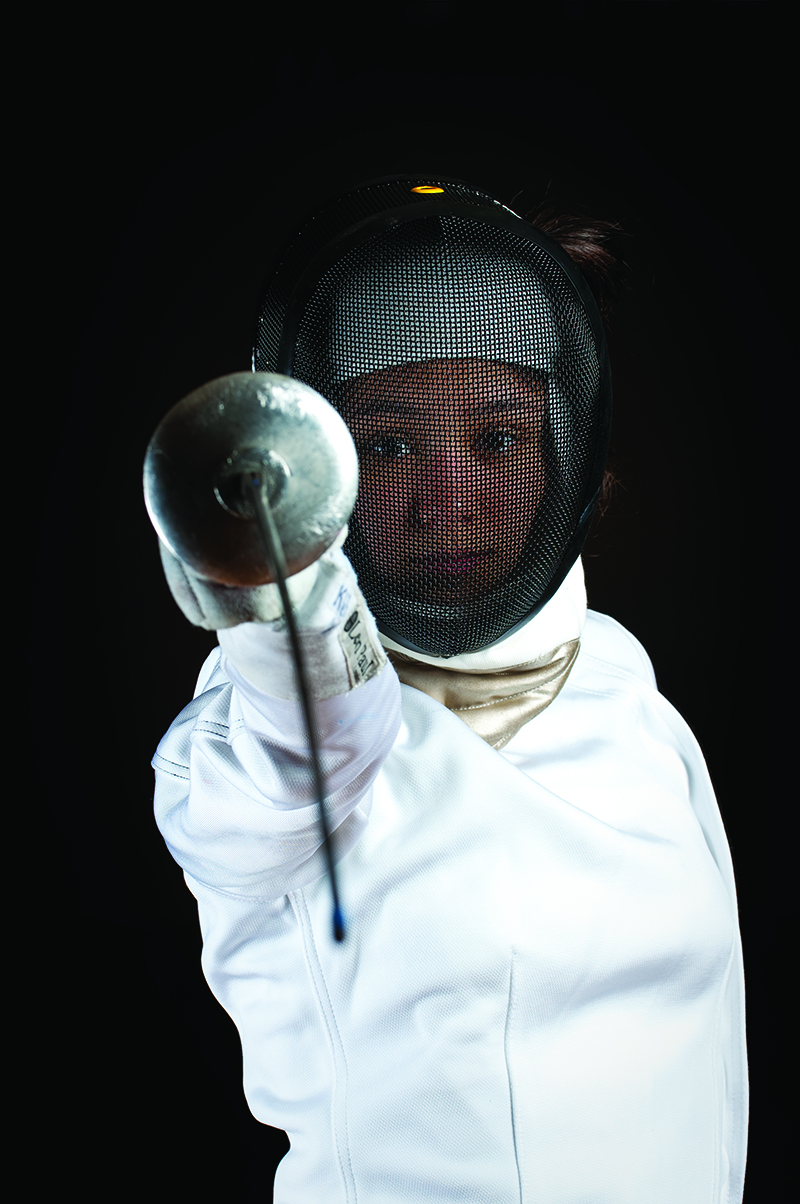 Lee Kiefer is the Kentuckian to watch at the U.S Women’s Olympic Foil Fencing Team in London for the 2012 Summer Olympics

When the U.S. Olympic team boards planes in mid-July, Lee Kiefer, a just-turned-18 fencing sensation from Lexington, will be among them.

Lee, the youngest member of the 2012 U.S. Olympic Fencing Team, is the top-ranking women’s foil fencer in the United States. She currently ranks seventh in the women’s foil senior division worldwide. (There are three fencing disciplines—foil, sabre, and epée—characterized by their particular weapon and their own sets of rules.)

“I love fencing,” Lee says, simply. “I love all the different aspects of it. I love the traveling, the chance to meet different people. And the sport itself is challenging, both mentally and physically.”

Lee will compete both individually and in the women’s foil team event. And her coach, Amgad Khazbak of the Bluegrass Fencers’ Club in Lexington—who has himself been named coach of the U.S. Olympic Women’s Foil Team—likes the team’s chances of landing a spot on the podium in London.

“I know we can reach our goals to have a medal in the Olympics—both individual and team, especially Lee,” says Khazbak, a former coach of the Egyptian National Fencing Team, who began working with Lee when she was just 9 years old. “Of course, it depends on how we fence that day, how we build on our strengths. But we can do it.”

Family Bond
Khazbak’s high praise—and high expectations—are nothing new. When he first laid eyes on Lee as a 9-year-old in early 2004, he told her parents, Teresa and Steve, both Lexington physicians, that she was good enough to make it to the Cadet (under 17 division) World Championships that year.

“We thought, ‘Yeah, right. He’s just saying that to keep her coming to fencing,’” says Teresa. “But then, she did make it to World Championships that year.”

“After two years of working with her, I told her family that one day she could be world champion,” Khazbak says, noting that in Lee he sees the unique blend of skills necessary to compete on the most elite scale: good reaction time, flexibility, mental strength, and agility.

“Fencing is like physical chess,” he says. “One part of your brain has to deal with your tactics and what your body is doing, while the other has to deal with what the other fencer is doing and adjust. You have to respond fast. You’re constantly making adjustments.”

Some of Lee’s talents are undoubtedly innate: her father was a collegiate fencer at Duke; her older sister, Alex, 20, is a decorated NCAA fencer preparing to enter her junior year at Harvard; and her younger brother, Axel, 15, competes on the Cadet world circuit. Clearly, talent for the sport runs in the family.

But like her sister’s and her brother’s, Lee’s skills have also been honed through years and years of hard work, dedication, and—yes—practicing even when she perhaps didn’t want to.

“There was a time when she first started that she hated fencing,” Teresa admits. “But as she grew older and improved and started winning, that motivated her to keep working hard and keep getting better.”

Before Alex left for college, the three Kiefer siblings practiced side by side under the constant chirping of Khazbak’s whistle and the slicing sound of metal on metal. Their parents shuttled them to fencing practice three to four hours a day, four days a week. Two other days were spent in cross-training and yoga.

When they were even younger, the Kiefers would supplement their kids’ fencing lessons with at-home lessons in their dining room turned makeshift gym.

“We definitely push each other to make each other better,” says Lee, who will fence at Notre Dame as a freshman in the fall. “It’s been fun to have fencing in common.”

“We didn’t start our kids in fencing with the goal of winning lots of medals,” says Steve. (Though Teresa does enjoy framing the kids’ awards alongside photo collages of their competitions.) “The goal was to teach the kids discipline, to show them how to work toward something on a consistent basis and set long-term goals.”

World Traveler
Clearly, those are lessons Lee has learned well.

Lee—who calls her fencing style “aggressive,” trademarked by lots of attacks—first set her eyes on the possibility of making the Olympic team a little more than two years ago, encouraged by her appointment to the 2009 U.S. Senior World Championship Team when she was only 15 years old.

In 2011, Lee made history by becoming the only fencer ever to earn individual medals in the Senior, Junior (under 20), and Cadet (under 17) World Championships in the same year.

She has taken multiple individual and team gold medals (not to mention several silvers and bronzes) in foil at Pan American and World Championship competitions around the world in the last two years.

Just as impressively, despite globetrotting from Seoul to Moscow to Rome for international competitions as often as every two weeks, Lee was able to maintain straight A’s in her rigorous AP coursework. She graduated from the prestigious Math, Science and Technology Center magnet program at Lexington’s Paul Laurence Dunbar High School in May.

From shopping the markets in Shanghai to swimming in the Dead Sea in Jordan to zip-lining in Costa Rica at the Pan American Zonals, at 18, Lee has seen more of the world than most people four times her age.

“When Lee first started, she was the typical middle child who lacked a bit of confidence,” says Steve. “When I look at her now, I see a very poised, confident young woman who’s going to succeed in life. And fencing has helped bring that out in her.”

Olympic Dreams
Besides being named to the 2012 Olympic Team in April, the bronze medal Lee earned at last year’s Senior Worlds has been the highlight of her decorated career. Then just 17, she was the youngest women’s foil fencer ever to earn a medal at the Senior World Championships, and just the second American woman ever to earn an individual fencing medal at the event.

“The average fencer is 26, 27 years old,” says Teresa. “We did not expect her to medal there. We weren’t even there. I watched it live on my computer. In her last bout, she had the bronze medal secured, but then she faced Valentina Vezzali (three-time Olympic individual women’s foil gold medalist in 2000, 2004, and 2008), who is 20 years older than Lee. It was so surreal. But Lee is so competitive, I know she didn’t go into it thinking, ‘OK, bronze is enough.’ She went into it trying to win.”

“I think I do well under pressure,” says Lee, who enjoys reading fantasy books in her rare spare time. “At tournaments I fence so much better than at practice. When I have a reason to win, I’m so much more present in the moment.”

As competitive as Lee may be, she is also exquisitely poised, articulate, and unexpectedly humble. After college, she plans to put fencing aside in order to pursue a medical degree.

“Even though fencing is a huge part of my life, eventually it will be time to move on,” she adds.

While currently the top-ranked member of the U.S. Women’s Foil Team, Lee doesn’t necessarily think of herself as the team leader: “The older girls have a lot more experience than me, and I look up to them,” Lee says. “We are a true team. We all work well together.”

And while Khazbak has medal aspirations for the team this year, Lee says her personal goal at the Olympics is simply “to fence well. I want to be proud of my performance. I’m not thinking in terms of medals,” she says.