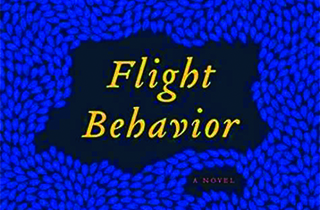 Fight-or-flight: a physiological reaction or decision that occurs in response to a perceived threat to survival or harmful attack as a way of controlling stress. Renowned Appalachian author Barbara Kingsolver portrays this response in numerous ways in her 14th book, Flight Behavior (HarperCollins, $28.99, www.harpercollins.com).

The story follows 29-year-old Dellarobia Turnbow, whose life didn’t exactly turn out like she had hoped. Pregnant in high school, she married the baby’s father, Cub, and began her monotonous life as wife, mother, and sheep farmer in what feels like a dead-end world. Living in a modest home provided by her in-laws on their land, Dellarobia and her family barely scrape by, seeing no opportunity for improvement and no way to assure the children’s futures are any more promising.

As Dellarobia reaches her breaking point, she chooses flight, attempting to walk away from all her problems by an illicit meeting with a younger man. On her way, though, a fiery ocean of monarch butterflies never before seen in her small Tennessee town changes her views and her mind, causing her to turn back. Little does Dellarobia know just how much her life will be affected as scientists and media descend on her family to study the arrival of the butterflies, who themselves have chosen a flight response to an attack on their environment.

Before becoming a successful writer, Kingsolver earned degrees in biology and worked as a scientist. In this novel, she addresses the long-debated issue of global warming and its effect on the environment. Through her characters, she presents the scientific view as well as the lay person’s view of this topic, using the butterflies as an example of what can happen to a species due to a sudden climate shift.

Dellarobia’s eventual choices might be viewed in much the same way. Miracle or disaster, change is inevitable as she decides whether to fight through the disappointment of her life or flee to something more.