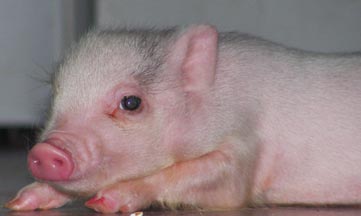 Many thanks to everyone who submitted a rescue story for this column. I greatly enjoyed reading all your stories, and Radar and Ella appreciate all the hugs and belly rubs they got by e-mail.

Many of your rescue stories were heartbreaking, such as the story of Cody, a miniature pinscher. Cody was placed in a shelter when he was taken away from abusive owners who broke his jaw and burned him with cigarettes.

Angie Schaftlein of Shepherdsville read about Cody and was so touched by his story that she drove 17 hours to rescue him from the shelter. It took Cody two months to finally trust that Angie and her husband weren’t going to hurt him.

“We will always be touched by this guy,” Angie writes. “He’s experienced so much pain, but has bounced back into a very sweet and loving companion. He may have a crooked jaw and burn scars on his nose, but he is absolutely beautiful to us!”

Louie the pug also had a close call. Louie was only an hour away from being euthanized when he was pulled from a shelter by Kentuckiana Pug Rescue. Stefanie Gaither, a surrender coordinator for the group in Robertson County, took the dog home. Louie was a mess: covered in feces and green mucus, he moved so slowly Stefanie was convinced he was an older dog. But time, a bath, and medications revealed that this dog was only a puppy, and already knew basic commands such as “sit,” “stay,” and “down.”

Foster parents offered to take Louie in, so Stefanie took him to Louisville.
“Louie bonded immediately to the couple taking him in,” says Stefanie, “and while they didn’t yet realize it, I knew Louie had found his forever home.”

The foster parents decided to adopt Louie, and due to the “pampered lifestyle” he lives, he’s now known as King Louie.

Some readers submitted stories of “accidental rescue.” That’s what happened with Patty the pony. When Becci Loomer of Harrodsburg decided to get a pony for her daughter, Joanah, she tried to do the right thing by researching to find a suitable pony, and when she found one out of state, she requested a video.

Becci says, “The pony I got a video of was fat, quiet, easygoing, a little girl riding her—the total package. But the pony that was delivered was hungry, skinny, wormy, and very strong-willed. But Joanah was so in love with this creature, I knew we had to do something.”

With a lot of handling and love, Patty learned to trust her new owners and “bloomed into a wonder pet.” Patty has since taught not only Joanah to ride but also her sister, Knacey. Patty has never bucked or kicked, and if her rider falls off, she simply stands and waits. Becci says this pony has “the biggest ‘I can do it’ attitude any little girl could ever want. I love this pony because she is the best teacher a mom could ever ask for.”

A Border collie dubbed Little Orphan Annie was living by herself in a field near busy streets. Cecilee spent months trying to lure Annie to her. Cecilee says she doesn’t know why Annie finally changed her mind, but at last Annie gave in and came to Cecilee. Knowing Border collies are happiest when they have a job, Cecilee hoped to place Annie at a horse farm, but that fell through.

“Even though I wanted her to have a home where she could follow her Border collie instincts, I was inwardly delighted,” Cecilee says. “From that day forward, Annie became my shadow hound. Rare was the step I would take without her by my side or, most often, herding me in the direction she wanted me to go. For the next seven years, she would be the alpha of our home.”

Suzy Q had a rough start in life. Her mother died soon after giving birth to Suzy and her five siblings. It was up to Marcia Turner of McKee to save them. But just how does one save six newborn pot-bellied pigs?

“I discovered that I had to feed all of them every hour on the hour because they would only eat 1 ounce at a time,” Marcia says. “It took a lot of sleepless nights, but all six pulled through in fantastic style.”

When the piglets were old enough, they all found other homes. But Marcia couldn’t give Suzy up.

“She is now my baby and pride and joy. She still believes I am her mother and doesn’t like any other pig. She may believe she is a human.”

If you’re going to rescue a cat stuck in a drainage pipe, you really have no choice but to name the cat Piper. That’s what J. Denise Wilkinson Underhill of Clarksville, Tennessee, did. She didn’t really want to add to the three cats she already had, so she brought the cat home on the condition that she and her family would find him another home.

You already know how that turned out.

“I dare say, Piper never left my home,” she writes. “I could not part with him and indeed said I could never live without my best friend. Cancer claimed his life at age 12. I have to go on, for there just happened to be…another kitten waiting to be rescued.”

When Sandy Waters of Danville saw her cat trying to pounce on a much larger hawk, she thought she was rescuing her cat when she picked him up. Turns out, it was the hawk that needed rescue. The hawk’s wing was obviously wounded, and Sandy wanted to help.

After many phone calls, Sandy found a raptor rehabilitator in Lawrenceburg who could help. The only problem was that Sandy had to catch the hawk. Sandy crept up on the hawk—”Did you know hawks can turn their heads completely around?”—threw a sheet over him, placed him in a large dog crate, and took him to Lawrenceburg.

Sandy learned a lot about hawks during all this: they mate for life, making it important to release a hawk in its original surroundings; you should not try to rehydrate a wounded hawk as it is easy to drown them; and it’s apparently difficult to determine a hawk’s gender. Sandy named her hawk Elvis, then re-named her Priscilla after an examination, only to return to Elvis upon closer inspection.

Elvis’ dislocated wing was treated, he was successfully rehabbed, and was released in Sandy’s back yard. Sandy even wrote about him in the local paper.

Sandy says, “We hope the good karma created by the rescue will find the hawk community keeping the rodents out of our yard…but leaving the cats alone.”

On a cold winter night, Jeff Pernus of Shelby County was vexed to discover he’d left his garage door up during a winter storm. He was even more vexed to discover the storm brought not only rain and sleet in his garage, but a cat. The cat was limping and hungry, so Jeff and his wife fed the cat, gave him a bed, and the cat settled right in. As Jeff notes, “He was not planning to leave. At least not anytime soon.”

As the cat, who they named Homer, settled into his new home, Jeff and his wife tried to find his owners through flyers and photographs posted in the neighborhood. No owner stepped up, but plenty of other people did: a shelter donated food, a veterinarian donated medicine, and another vet fixed the cat’s paw and neutered him free of charge.

“We do not know where he came from,” Jeff writes, “but he is ours now. Or more appropriate, we are his. All Homer ever wanted was to be loved and have a home. He got his wish and we are altogether happy he did.”

Diane Henry and her daughter Nicole were satisfied they had done their part when they took in a skinny white dog they found on their front porch in Nicholasville. The dog they called Misty looked as though she were nursing, so they tried to find Misty’s owner and reunite her with her puppies.

Despite their efforts, no one claimed Misty, so they cared for the dog, noting how much the dog ate and the weight she was putting on. There was good reason for it: Misty gave birth to nine puppies.

Their good deed of rescuing one dog turned into a 10-dog rescue.

Diane and her family loved the puppies, caring for them and socializing them, but knew they couldn’t keep them all. The pound was out of the question, so they turned to The Haven for Dogs in Lexington. The founder of that group, Nancy Victor, was able to help find homes for the puppies. Potential adopters were all carefully screened, and all pups were altered, immunized, and microchipped before going to their new forever homes. One puppy even went on to become a therapy dog.

This rescue was the beginning of a long-lasting friendship, as Diane writes: “I don’t know what we would have done without Nancy and The Haven for Dogs. We were so lucky to have found her, and we have continued to foster dogs when they need us. We have found a forever friend in Nancy, and she in us. Our lives have been enriched by this relationship and by Misty finding us that fall day.”

Your rescue stories keep coming in. Many thanks to the following for their rescue efforts:

• Tara Upchurch, who’s taken in cats and dogs all her life to her home in Albany;

• The Pogue family in Ohio County, who care for J.C.—Jail Cat—who barely survived after being doused with kerosene;

• Hooch, a rottie locked in an abandoned house, now cared for by the Saunders family in Hopkinsville;

• Wiley and Nina Horn of Hopkinsville, who took in Gypsy the wandering dog;

• The husky named Grandpa, rescued by Sherri Marcoski of Crestwood, who got to live his final months in peace and comfort;

• A dog named Gracie, once alone and forgotten, now loved and cared for by D.J. Fee of Taylorsville;

• Myrna Childress of Rockcastle County, who continued to work with a rescue group after adopting her dog Pixie;

• Buddy the beagle, who walked into the life of Shannon Lee of Morgantown, bringing great joy and happiness;

• And Carrie White and her family in Beaver Dam, who added a small dog named Chance to their lives. Whether you’ve rescued one animal or have devoted your life to saving as many animals as you can, rescued animals are particularly special. Sherri Marcoski perhaps said it best when she wrote about her dog: “I’m grateful that Grandpa didn’t have to live alone, he didn’t have to die alone, and that he was finally respected for being the gentle, magnificent, joyous, and comical creature he’d always been. We will meet again.”