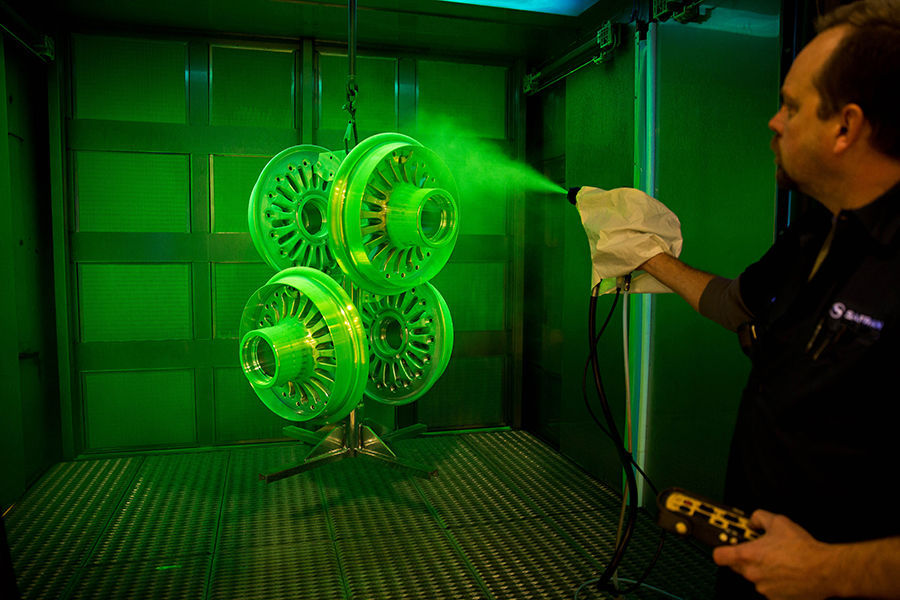 Workers at the Safran Landing Systems Kentucky plant in Walton depend on reliable, affordable electricity from Owen Electric Cooperative to manufacture and refurbish brake disks and landing gear for the aerospace industry. Photo: Peter Taylor/CAPA Photos/Safran

The aerospace/aviation sector is expanding in Kentucky, encompassing parts manufacturing, supply, air freight service, education, and workforce development. Many factors contribute to the interest in Kentucky as a site for the aerospace industry. These include a highly skilled and experienced workforce, excellent infrastructure, and location, according to the state Cabinet for Economic Development.

Recognizing that the aerospace and aviation industry had become the top exporting industry in Kentucky in 2015, the state legislature that year approved a resolution directing the state Transportation Cabinet, Cabinet for Economic Development, and the Commission on Military Affairs to study the economic impact of that industry in the state. The resolution directs the agencies to identify opportunities for “further growth and development” of the industry.

The federal government also has recognized the aerospace industry potential of portions of northern Kentucky as part of the Southwestern Ohio Aerospace Regional Manufacturing Community.

The Kentucky Cabinet for Economic Development lists the state’s aerospace industries, including a map. Find it online at Think Kentucky.

The sky’s no limit for aerospace/aviation sector
“Electricity is a pretty good deal in Kentucky.” That’s what Philippe Garnier, CEO and general manager of Safran Landing Systems said, during his keynote speech at the 2016 Kentucky International Trade Summit in Louisville. The company recently expanded its Walton manufacturing plant for aircraft landing systems and brakes, with power provided by Owen Electric Cooperative.

Dozens of other companies agree, and the aerospace/aviation industry now employs more than 15,000 people within the state. Phoenix Products Inc., which is served by Jackson Energy Cooperative, makes high-tech components for military helicopters in McKee. It won the 2016 Martha Layne Collins Award for Excellence in International Trade in the Small Enterprise category during the summit.