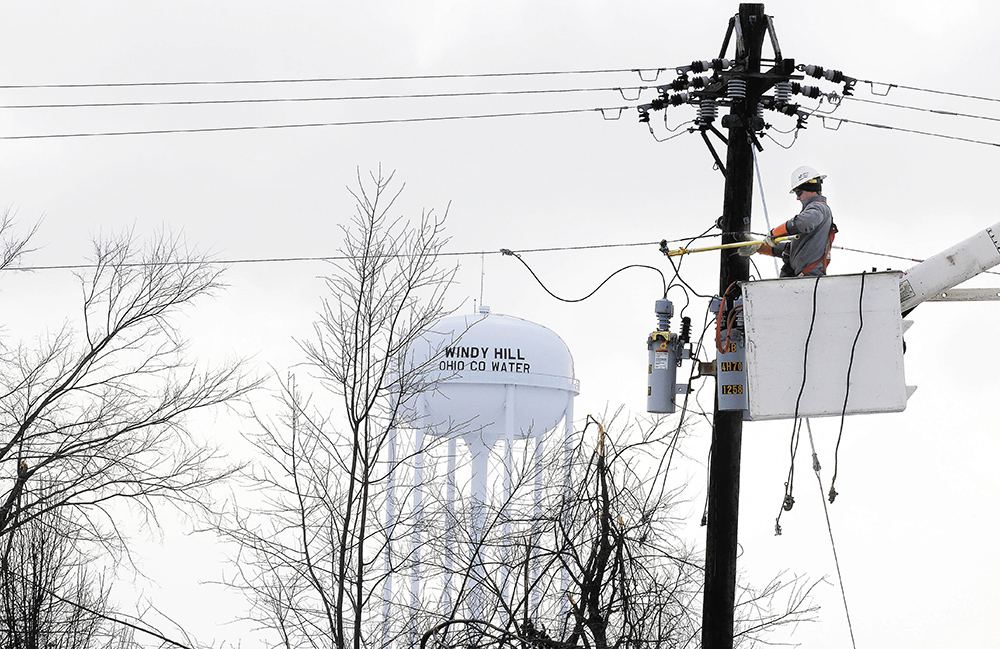 “I hope I never see another disaster like the ice storm again,” says Jackson Purchase Energy President and CEO Greg Grissom. At the time, Grissom was manager of then-Hickman-Fulton Counties RECC, one of the hardest-hit electric cooperatives.

The storm began its slow, icy descent in western Kentucky on January 26. By the time it was over, the biggest ice storm in Kentucky history would claim 36 lives, trigger power outages to 770,000 electric customers across Kentucky and cause nearly $1 billion in damages.

The entire systems of several electric cooperatives were down in the initial hours. Eight co-ops saw more than half of their consumer-members lose power when the cold front propelling the storm stalled over the state, creating ideal conditions for ice. Layer after layer of freezing rain coated every surface. It took weeks to fully restore power across the state.

And, if the weight of the ice wasn’t enough to topple trees, power lines and electric poles, subsequent high winds delivered the second half of the one-two punch that paralyzed much of Kentucky and created a dangerously beautiful Frozen State, as recalled in the book produced by Kentucky Electric Cooperatives.

Temperatures remained below freezing over most of the ice-covered area until January 31. The crystalline beauty was repeatedly interrupted by the sickening crash of trees and limbs on the hard surfaces below, echoing across the landscape.

“The 2009 ice storm stressed every aspect of our cooperative, employees, finances and member relations,” says Alan Gates, president and CEO of Pennyrile Electric. “However, any time an organization goes through that type of event, we have the opportunity to refine our processes and become better prepared for the next disaster.”

The Hopkinsville-based co-op implemented an outage management system, Supervisory Control and Data Acquisition (SCADA) and a more defined emergency response plan to enhance the ability of employees to meet the needs of consumer-members.

Co-ops across the commonwealth share a similar story, learning lessons to be better prepared in a future disaster.

Coordinated by Kentucky Electric Cooperatives, the mutual aid response by thousands of co-op linemen  and contractors from across the South and Midwest is one of the great success stories of the disaster recovery.

“A major event like the 2009 ice storm reminds me of how a community will come together when times are tough,” says Chris Perry, president and CEO of Kentucky Electric Cooperatives. In 2009, he was president and CEO at Fleming-Mason Energy.

“The local support for our cooperative was wonderful,” Perry says. “Churches fed us; local law enforcement and officials were responsive to access needs on roads; and businesses filled local needs including fuel, tools and batteries. The DNA of an electric cooperative is commitment to our community. I think these storms show something deeper, and that is that our communities are committed to their cooperative.”

The Weather Channel ranks the 2009 storm as the third-worst ice storm in American history. Because meteorologists saw it coming, co-ops prepared by ensuring that equipment was fueled, crews and extra staff were ready and back-up communications tested in case phone service was interrupted.

The supply chain for electrical equipment was ready, available and uninterrupted thanks largely to United Utility Supply Cooperative, a full line stocking distributor of materials critical to the electric utility industry. UUS provided more than 1,600 tons of transformers, poles, crossarms, conductors and line hardware to get the system back up and running.

“Once a disaster strikes, we continuously supply our members with material as needed,” UUS Executive Vice President Gary Burnett says. “We meet afterward to evaluate how we met our members’ needs and determine how we need to improve in the future.”

“In such trying times we all learned the value of teamwork and the commitment to our members,” Jackson Purchase Energy’s Grissom says. “I learned so much about logistics and storm management, but the people who worked together through those long days and nights will always have a special place in my co-op family.”