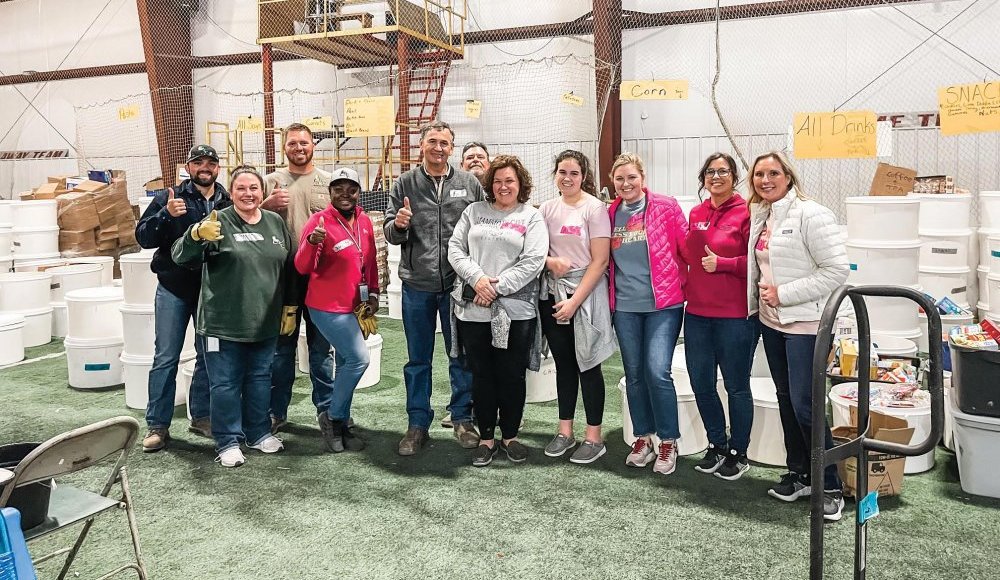 Meeting needs is part of being a “family”

On quiet streets and country roads, the abandoned remains of homes and businesses speak to the ferocity of the December storms, and the tremendous suffering of the people who lived and worked here.

Yet as the piles of debris gradually diminish and residents discuss how to recover and rebuild in the coming years, stories of support are also surfacing.

“Natural disasters receive a lot of attention in the early weeks, but recovery is often a much longer process,” says Greg Grissom, JPEC president and CEO. “We hope to organize ongoing community projects and provide opportunities for additional employees to volunteer.”

Stacked neatly inside a warehouse at West Kentucky Rural Electric Cooperative (WKRECC) in Mayfield is part of the treasure trove of handmade hats, quilts and tiny crochet angels, part of $17,000 in donations and household items from Ohio electric cooperatives and Common Thread, a faith-based organization in Cincinnati.

WKRECC and the Graves County Schools Family Resource Center have distributed the items as needed to families as they transition into permanent or semipermanent housing.

“We have had so many people who have offered a hand-up to us during this incredibly difficult time,” says West Kentucky RECC’s Communications and Media Relations Coordinator Georgann Lookofsky. “None more so than our own cooperative family.”

Employees of Kentucky Electric Cooperatives, the statewide association of all 26 of the commonwealth’s co-ops, purchased toys and gift cards with a special focus on Christmas gifts for older children who can be overlooked in such charity efforts.

Within hours of the tragedy, cooperatives from across the country contacted the Kentucky statewide association asking where they could send cash donations to help tornado victims in the co-op family. The generosity of hundreds of co-op donors spurred the establishment of the Kentucky Rural Electric Disaster Fund.

One of those checks came from lineworkers at Blue Grass Energy, a sister cooperative hundreds of miles from the disaster zone.

“We sent help to restore power after the tornadoes,” says Thomas Walton, a Blue Grass Energy crew chief. “When our linemen came back and told us what they had seen first-hand, we knew we had to do something.”

“We found out that some of the co-op employees and their families had suffered damage to their homes. It became obvious that we needed to do more to help,” adds Travis Long, another crew chief.

“One of the greatest benefits of the cooperative network is the willingness to always assist when others are in need,” says Blue Grass Energy President and CEO Mike Williams. “I am extremely proud of our employees and their support of co-op families in the path of the tornadoes.”

Electric co-ops are all like family, so when one co-op is faced with a disaster, staff members from co-ops across the state and the nation come to its aid.