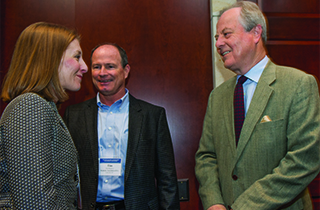 Looking for a phrase to start an argument? Try “greenhouse gases.” Gritting your teeth yet? I thought so. Don’t worry. My column this month is not about weather science or statistics, so you can keep reading. You and I are not going to have a fight on the pages of this magazine.

The real fight is taking place in Washington, D.C. That’s where electric utilities are responding to the latest round of regulations aimed at further reducing power plant emissions. Coal is getting most of the attention. Worldwide, coal produces about 41 percent of the supply of electricity. Here in Kentucky, coal produces 93 percent of your electricity.

Utilities decide when, where, and what kind of power plant to build based on the best way to keep the lights on for you, and to keep your electric rates affordable. But regulations already announced within the last year, and a new batch to be revealed this June, are complicating their decision-making process.

The new focus on carbon dioxide emissions
Last month when this column asked “will coal’s past predict coal’s future?” I was thinking about coal’s proven value as a fuel to generate electricity. That column looked at all the reasons why coal has been such a widespread choice. In Kentucky, as in many other parts of the world, coal is a locally abundant natural resource. It’s easy to transport and stockpile, which makes it a reliable fuel. Coal is also a low-cost fuel—and that means low-cost electricity. That’s important not just for household budgets, but for businesses and national economies.

But there’s something else about coal’s past that’s worth thinking about—how the technology to use it has changed over the decades. During the last 40 years, engineers have figured out ways to prepare coal differently, burn it more efficiently, and operate power plants in more environmentally responsible ways. America’s electric utilities already have a highly successful record of reducing power plant emissions.

The focus then was on the six substances (known as criteria air pollutants) spelled out in the Clean Air Act of 1970. Utilities have spent billions of dollars developing cleaner ways to use coal, including modifying and remodifying older power plants, as well as building completely new power plants based on new designs to reduce those kinds of emissions. Even with all the money spent on those new kinds of technology, electricity made from coal is still a very low-cost option.

Now the battlefront against unwanted emissions has shifted. President Obama and others in Washington, D.C., want to sharply reduce carbon dioxide emissions from power plants.

Higher costs for electricity
They are trying three strategies to achieve their goals. The first strategy is to say that although the Clean Air Act did not mention carbon dioxide specifically, it can be used as the basis for issuing new regulations for greenhouse gases. The second strategy is to set narrow limits on emissions of carbon dioxide from coal power plants. The third strategy is to make those limits so tight utilities will be forced to shift toward producing more electricity using natural gas, which releases less carbon dioxide than coal.

For months, electric utility industry leaders have been traveling to Washington, D.C., to explain to elected members of Congress (and to unelected federal regulators) the day-to-day details of producing electricity. Engineers, mining industry leaders, researchers, scientists, and citizens from coal mining states have also given testimony about the importance of coal in the nation’s energy mix and the national economy.

They say that the newest regulations for coal go too far, much too fast, will harm the economy, and that they are based on unproven technology. They’re showing the decision-makers where and how existing coal power plants keep the supply of electricity steady, and why coal will still be needed in the future.

For new power plant construction, the fight is more complicated. Proposed new rules say that any new coal-based power plant must be built to include a system for capturing carbon.

John Novak, the National Rural Electric Cooperative Association’s executive director for Environmental Issues, says, “We don’t think carbon dioxide capture technology is adequately demonstrated. It has not been deployed at commercial scale at any power plant anywhere in the world. But the real issue is the cost. Adding it would nearly double the cost of building a coal power plant.” That seems likely to completely stop new coal power plant construction within the United States.

Coal advocates believe it would be more sensible to continue to replace older coal power plants with highly efficient, proven designs based on “supercritical” and “ultra-supercritical” technology that uses coal and produces fewer emissions, as utilities in China, India, and other countries are doing. They want to convince federal regulators to set carbon dioxide standards and timetables at levels that will allow American utilities to use coal while other technology is being perfected.

Kentucky’s new climate policy job
How will the final details of new national coal regulations affect daily life, business activities, and electricity rates in Kentucky? Last September, Kentucky Energy and Environment Cabinet Secretary Len Peters began planning ahead to find the answers. He appointed John Lyons to the new position of assistant secretary for Climate Policy. Lyons is gathering information throughout the state about the effect federal rules limiting greenhouse gas emissions would have on coal mining and coal use by electric utilities, as well as the impact on local economies and the state’s manufacturing industries. Lyons will help coordinate and implement the state’s response to the new rules.