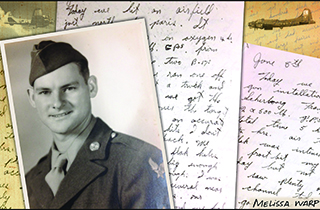 Here they were in my hands, the most dangerous days of Dallas Jacobs’ 91 years, scribbled in pencil on unlined paper in what he calls “kind of a diary” from World War II.

Reading over his entries I tried to imagine—but could not—what it must have felt like for him when, as a 20-year-old Lincoln County farm boy, he found himself behind two .50-caliber machine guns as the waist gunner on a B-17 bomber, flying 33 missions in the war-clouded skies over Germany and France.

After each mission, he recorded memories of what happened that day, and there was little chance that he could forget. He and his eight crewmates on the “flying fortress” were usually targets of heavy fire.

On one mission, only nine planes returned out of an 18-plane formation.

Once, their plane was so badly damaged by air and ground fire that, though it landed on a wing and a prayer, mechanics said they counted more than 600 holes in the aircraft, from as small as a pencil to several inches in diameter.

Jacobs was never wounded but came close when the heel of his boot was struck by a piece of shrapnel.

“I don’t know how we made it. I think the Lord was just watching over us. We did a whole lot of praying back in those days,” says Jacobs, a longtime member of South Kentucky Rural Electric Cooperative.

Many of today’s generation either aren’t taught or don’t bother to learn about D-Day or Pearl Harbor, the Bataan Death March, Auschwitz, or the Battle of the Bulge. Yet our freedom to ignore history has been bought at a dear price by countless thousands of veterans like Dallas Jacobs who laid their lives on the line, and by the many who paid in blood and never came home.

Part of Jacobs’ entry from June 5, 1944, reads, “…Flak was intense and accurate…We saw plenty of boats in the channel today. They must be going to make a landing in France.”

On June 6, history will mark the 70th anniversary of D-Day, when American and Allied troops did indeed storm ashore on the beaches at Normandy in the face of withering German fire from heavily fortified emplacements. Jacobs remembers peering down at the D-Day landing site through a haze of smoke on a bombing run near the coastline and wondering how the troops would ever penetrate German defenses.

As war correspondent Ernie Pyle would write after the invasion, it seemed “a pure miracle.” Jacobs writes: “I didn’t know there was that many boats in the world.”

Finally back at home in Kentucky, Jacobs married a pretty girl named Lillian Sanders. They had four children, nine grandchildren, and 21 great-grandchildren. Dallas retired as a construction engineer with the state highway department. He lost Lillian in 2012.

Occasionally someone thanks Dallas Jacobs for what he did in World War II.

“It makes you feel good,” he says.