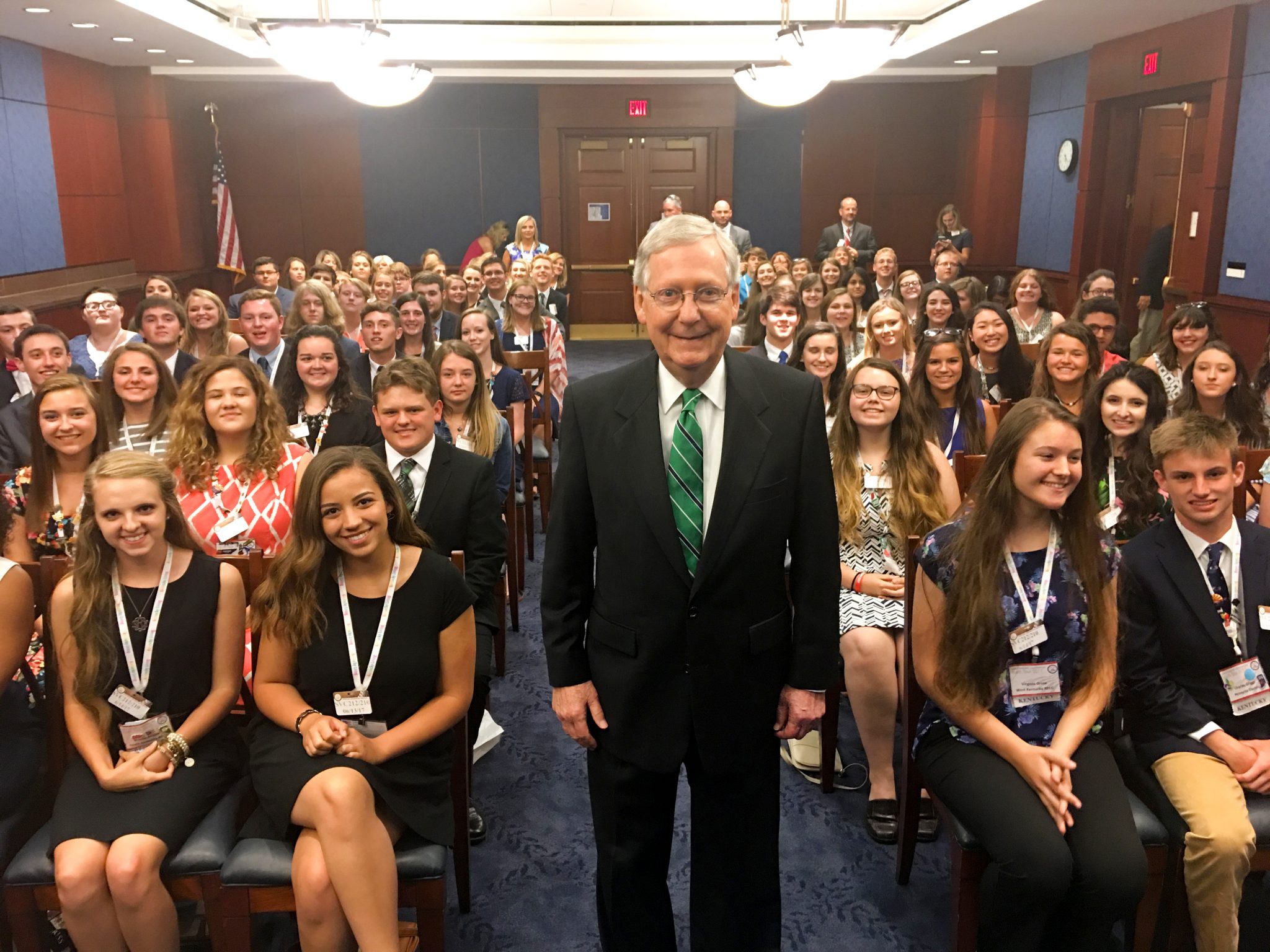 Republican U.S. Senator Mitch McConnell, as well as other Kentucky congressional delegates, meets with the Kentucky students on the 2017 Washington Youth Tour in D.C. in June. Photo: Joe Arnold

Each month in this space, Kentucky Living looks at a wide variety of developments in the energy world, all under the umbrella of The Future of Electricity.

It’s a way to keep the members of Kentucky’s consumer-owned electric cooperatives well-informed on the issues, technologies, people, and pressures that affect the delivery of electricity in your community.

This month’s Future of Electricity highlights a hopeful future for Kentucky’s electric cooperatives: the student leaders chosen and sponsored by their local co-ops as delegates on the Washington Youth Tour. In June, 83 Kentucky students traveled by bus to the nation’s capital to gain a personal understanding of American history and their role as citizens and members of electric cooperatives. The students toured monuments and historic sites and met with Kentucky’s congressional delegation.

The NRECA Youth Day reminded a record crowd of nearly 1,800 students from across the nation of the spirit of electric cooperatives’ commitment to community and the important role of being politically aware and politically active.

Allison Wade of Jackson Energy Cooperative, McKee, was selected as the Youth Leadership Council representative, a yearlong appointment where she will represent Kentucky electric cooperatives on the national and state level.

“Throughout the Youth Tour, I made memories and friendships that I will carry with me for the rest of my life,” Wade says. “And I am beyond grateful to share this experience with other cooperatives across Kentucky.”
“You bring a voice that wants to engage with people and talk about your community and what matters to you,” Jim Matheson, president of the National Rural Electric Cooperative Association, told the students. “It’s up to all of us to support it, nurture it, hold it accountable, and make it work. That’s the approach of NRECA and that’s the approach you will help us pursue.”

It’s a lesson the students took to heart.

“As I was surrounded by incredible people, monuments, history, politicians, and current events, Washington, D.C., captured my heart,” says Annah Valenta of Blue Grass Energy Cooperative. “This trip has helped guide my decision to pursue political journalism, a passion of mine which grew much stronger after my week in D.C. And it’s all thanks to Blue Grass Energy and Kentucky Association of Electric Cooperatives.”

Senator Lyndon Baines Johnson inspired the Youth Tour when he addressed the NRECA annual meeting in 1957. The senator and future president declared, “If one thing comes out of this meeting, it will be sending youngsters to the national capital where they can actually see what the flag stands for and represents.”
KAEC has been coordinating the tour for Kentucky co-ops since 1972, when 18 students and four chaperones made the trip.

The 2017 tour was led by KAEC’s Mary Beth Dennis and 13 chaperones.

Dennis Cannon, now president and CEO of Jackson Purchase Energy, led the tour for 19 years, from 1995 to 2014, introducing more than 1,200 high school students to the nation’s capital.
“We know that it changes lives,” Cannon says.

“It inspires young people to look higher and to reach further,” Cannon says. “It motivates them to get involved and to make a difference in the world.”