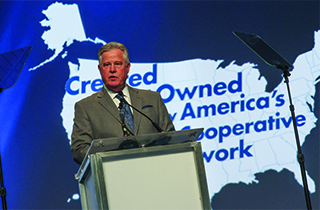 The national electric co-op financing organization honored a Kentucky co-op leader in March, at the annual meeting of electric co-ops from around the country.

Burns Mercer, president and CEO of Meade County Rural Electric Co-op based in Brandenburg, ended his term as president of the board of CFC, the more familiar term for the National Rural Utilities Cooperative Finance Corporation.

CFC is a 45-year-old, $22 billion financial cooperative that has played a key role in today’s success of the more than 900 local, member-owned electric co-ops in the United States.

Speaking to more than 5,000 co-op leaders meeting in Nashville, Mercer reflected on his past year as CFC president, and his time on the board.

“I joined the CFC board in 2008… just in time for the worst financial crisis since the Great Depression. It was an honor to serve on a board that made sure CFC came through the crisis unscathed,” he said. “I wish you knew how many times our board, when making important decisions…talked about being a cooperative and how a decision would affect folks back home.”

Also at the meeting, CFC’s CEO Sheldon Petersen reported on a strong financial position for CFC, saying, “Our sole focus on the success of the electric cooperative network has remained constant. That is what truly sets CFC apart in the world of the capital markets.”