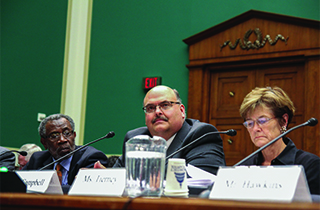 The head of a Kentucky electric power co-op told Congress in November that there’s a better way to reduce greenhouse gas emissions than the path being pursued by the Environmental Protection Agency.

In testimony before the House Energy and Commerce Subcommittee on Energy and Power, Tony Campbell supported a specific proposal that would require that a new kind of emissions technology be tested before the EPA requires it to be used for new coal plants.

But Campbell also laid out a broader critique of the basis of the EPA’s approach to regulating carbon emissions.

Campbell said the cost of implementing the expensive, untested technology, known as carbon capture and storage, “would represent a devastating and unfair impact to our rural members” in the form of higher electric rates.

“Higher electricity rates would further harm Kentucky’s economy, where coal production has declined by more than half in less than 25 years,” said Campbell, president and CEO of Winchester-based East Kentucky Power Co-op. “With higher rates, manufacturing jobs would also disappear, further compounding the impact to the economy.”

The reason for the November hearing goes back to a 2007 ruling by the U.S. Supreme Court. In that ruling the court said the federal Clean Air Act could be used to regulate greenhouse gases that have been blamed for global warming.

The EPA’s September regulations call for new coal-fired power plants to use the carbon capture and storage technology. That idea involves “capturing” the greenhouse gases from burning coal before they leave the power plant, then storing them in a permanent site, like an underground rock formation.

Carbon capture is being tested at a handful of sites around the country. None of those projects is ready for commercial operation, and they have been extremely costly.

The proposal that Campbell supported in his testimony was drafted by Sen. Joe Manchin of West Virginia and Rep. Ed Whitfield of Kentucky, who chairs the Energy and Power Subcommittee. The proposal says that before the EPA can require carbon capture, the technology must be shown to be able to operate for one year “on a full commercial basis.”

Campbell added that while East Kentucky Power Co-op supports Whitfield’s proposal, he said it “does not go far enough” in changing the basis for the EPA’s rules.

“The regulations at issue will not have a meaningful impact on global climate change,” Campbell said.

He said a better way to approach greenhouse gas reduction would be to consult with coal-producing states, and to allow utilities to make emission reductions on a more realistic timetable.

Noting coal’s importance to the economy since it produces 40 percent of the nation’s electricity, Campbell said, “Congressional action is necessary to keep EPA from regulating all coal-fired electricity generation out of existence.”