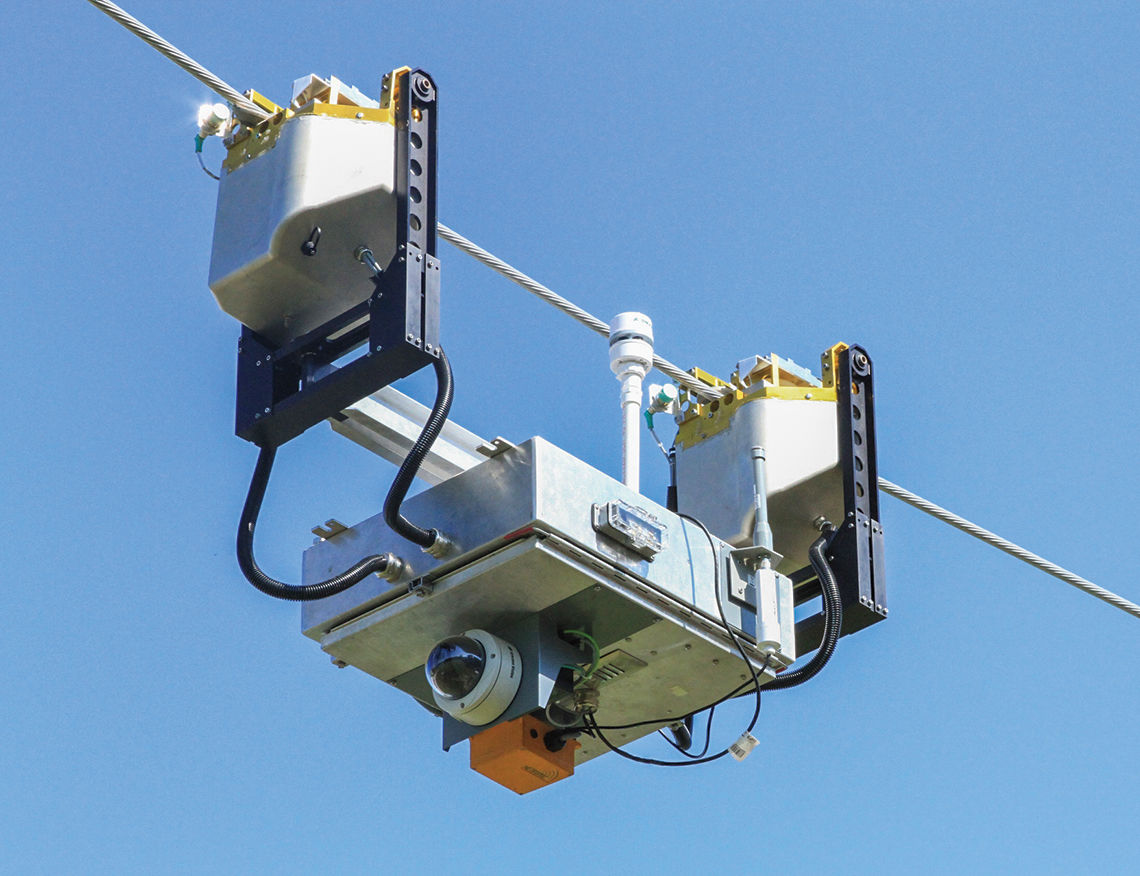 Utilities are building a better way to inspect power lines

The inspection of high-voltage transmission lines and support towers is a tough job. If you were flying in a helicopter going 60 miles an hour along the corridor, how many details would you notice? A hairline crack in a supporting strut? An insulator leaning out of plumb? Does the pilot’s flight plan include time to hover in place so you can snap a few photos? Can you constantly keep shifting your gaze out the window then back inside to write notes on a tilting clipboard sliding around on your lap?

Or maybe you think it would be easier to do a walking inspection at ground level. You’ll need sturdy boots, a hard hat, clipboard, camera—and a pair of binoculars so you can look high overhead. Notice any damage caused by perching birds? And don’t forget the maps and photos from previous years—you’ll need to compare what you see today to what the situation looked like the last time. When did that tree start leaning into the right-of-way? Is storm-water runoff cutting a new gully under a support tower? By the way, how many more miles can you walk uphill before sunset?

Could a robot make the job easier? Five years ago, members of the Electric Power Research Institute began exploring the potential of a new robotic technology to tackle these and other activities. EPRI is an independent, nonprofit group whose members include scientists, engineers, and a broad range of experts working in all facets of the electric utility industry. They know what the problems are—and they know just any robot won’t do. Their mission is to design, build, and demonstrate a new kind of experimental robot that could help humans perform these vital power line inspections.

Andrew Phillips, director of Transmission and Substation Research at EPRI’s Charlotte, North Carolina, office, says, “The challenge for utilities is that fly-bys, hovering flights, and walking-on-the-ground inspections are very expensive to do. Hiring a helicopter can cost up to $600 an hour. And it’s hard to get high-quality information about the condition of the components in a limited amount of time.”

Any well-designed robot has four distinct features:
• Controllable movement
• Reliable source of energy to perform tasks
• Ability to sense its environment
• Communications intelligence (to receive instructions, react to events, and report its activities)

But a cost-effective robot capable of inspecting high-voltage power lines and their support structures will also need to be permanently installed, easy to operate, and capable of withstanding all kinds of weather events. Instead of flying or walking, the prototype robot (nicknamed “Ti”) uses traction wheels to crawl along the thin shield wire a few feet above the thicker energized power lines. Using an existing part of the corridor will help keep costs under control. Only short bypasses need to be added so the robot can get around insulators and other obstructions. The original design envisioned a solar-powered robot, but modifications now enable the robot to also harvest energy from the transmission lines themselves to recharge its three lithium polymer batteries.

The new robot’s sensory abilities go far beyond human vision. The robot has high-definition visual and infrared spectrum cameras that can compare current images to past images. It’s equipped with a microphone, GPS system, and laser rangefinder for pinpoint measurements. The robot also includes an option for LiDAR (light detection and ranging sensors). The robot can also sense arcing and other dangerous malfunctions in the power grid. In high wind or earthquake zones, it can be [pullquote cite=”Andrew Phillips” type=”left”]“The robot gathers much higher fidelity information than somebody’s eyes. It also includes devices that sense variations in voltage in the power lines to find problems immediately and alert utility company workers. And all that information can be stored in a database for comparison in the future.”[/pullquote]
equipped to detect vibrations, and in coastal areas it can spot problems caused by salt accumulations.

Although there are already a few robot-like tools available in the utility industry, they are controlled from the ground by a human accompanying it. What makes this robot different is its permanence. Ti is designed to be on the job 24 hours a day, seven days a week. This robot is able to function in remote, rugged terrain without a human being nearby, then communicate over long distances to utility company personnel.

Moving at an average speed of 5 miles per hour, the robot can also pause when instructed to do so, or travel a bit faster in an emergency. Designers are also building in reserve battery capacity to keep the robot active in the dark so it can be sent to investigate trouble spots after nightfall. Recent preliminary tests on a simulated high-voltage transmission line at EPRI’s Massachusetts laboratory included going up and down slopes typical of transmission line corridors.  A real-world test on a segment of active transmission line in central Ohio is set to take place in early 2014.