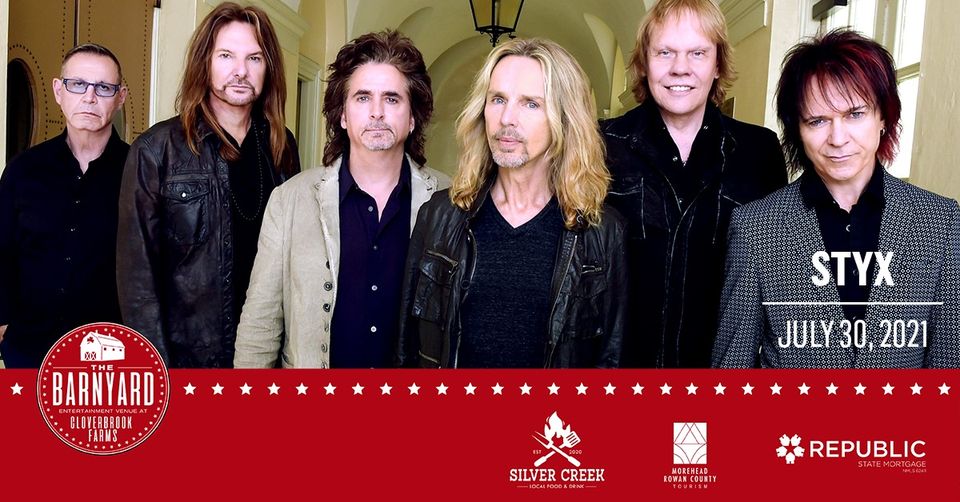 The iconic band Styx take The Barnyard stage July 30, 2021 followed by Rodney Carrington with special guest Jon Reep on July 31, 2021. The Barnyard Entertainment Venue is located in Sharpsburg, KY just minutes off I-64. Tickets are on sale now at thebarnyardvenue.com.

Styx is a multimegamillion-selling rock band that has forged an indelible legacy both on record and onstage. The six men comprising Styx draw from over four decades of barn-burning chart hits, joyous singalongs, and hard-driving deep cuts.

A native of Longview, Texas, Rodney Carrington is a country comedian who built a cult following through his regular exposure on syndicated morning radio shows, and at the same time relentlessly toured the nation’s comedy club circuit. He has released six major-label studio albums and a greatest-hits package. His comedy act typically combines stand-up comedy and original songs.

Jon Reep is a nationally touring comedian whose contemporary country point of view has won
over legions of fans in comedy clubs, on tv and in film.

The Barnyard is Kentucky’s newest open-air amphitheater! Located just 50 minutes from Lexington, with easy access from all of Eastern KY. The Barnyard is an exciting escape for live entertainment fans. Great food, cold beer and lots of fun for the entire family.

Located in Sharpsburg, KY the Barnyard is just 10 minutes from I-64 located on over 170 acres for up to 8,000 event attendees to enjoy. The summer season is full of country, rock, bluegrass, and Christian performances with family nights, fireworks, and more. Upcoming shows include Travis Tritt with more shows to be announced soon.