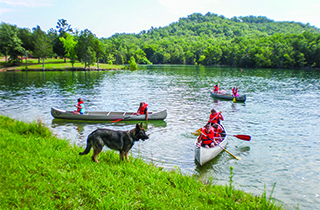 When the late Kentucky State Police Lt. John Tomlinson conceived the idea of Trooper Island back in 1964, it’s doubtful he could have imagined what an icon and success story his brainchild would become nearly 50 years later.

His dream was to create a state police-run summer camp for underprivileged kids who couldn’t afford to go to a regular summer camp, and to teach them outdoor skills, including swimming, fishing, canoeing, and archery. In 1965, the first group of campers was taken by boat to a 34-acre chunk of land in the middle of Dale Hollow Lake that was named Trooper Island. Since then, the lives of more than 25,000 kids have been uplifted and changed for the better.

Operating solely on donations, Trooper Island summer camps are free for the children who are selected to attend. In the course of their everyday duties, state troopers from across Kentucky identify and recommend potential campers between ages 10 and 12 who meet the criteria. These are not juvenile delinquents or troubled youth, but simply impoverished children whose parents can’t afford to send them to a typical summer camp.

“For many it’s their first camping experience and even their first trip away from home,” says Trooper Paul Blanton.

Sixteen boys and 16 girls are selected from each of the 16 Kentucky State Police posts. Two “partner posts” are assigned to each weeklong session during the eight weeks the summer camps are held—64 children per week. The kids are taken by tour bus to Dale Hollow Lake, where they hop on a boat to the island.

When the campers arrive they don’t see uniformed officers. Instead they ride the bus to camp with troopers wearing street clothes, because, as Blanton says, “It’s important that they see us as everyday people, too.”

Trooper Island thrives to this day due to the care given by troopers and to their fund-raising efforts. One of the largest sources of funding for the camp is the annual KSP raffle. This year a $10 ticket will buy you a chance to win a 2014 GMC Sierra pickup truck to be given away at the Kentucky State Fair. You can buy those tickets at any State Police post.

No one kept data on what became of all the campers after they found self-confidence, self-respect, and a host of skills they may never have learned otherwise, but there is one clue to the positive impact of Trooper Island. Over the years, 45 campers became Kentucky State Police officers themselves.

Now that’s quite a legacy.

For more information go online to www.kentuckystatepolice.org and follow the links to Trooper Island.

Trooper Endre Samu, camp director, is asking anyone from the first group of campers in 1965 to attend an appreciation ceremony at the 50th anniversary of Trooper Island in 2015.

Samu has also begun a project to find out what became of those 25,000 campers, and he would like to hear from every one of them. Please contact him at: Trooper Island, P.O. Box 473, Albany, KY 40602 or e-mail at trooperisland@msn.com.