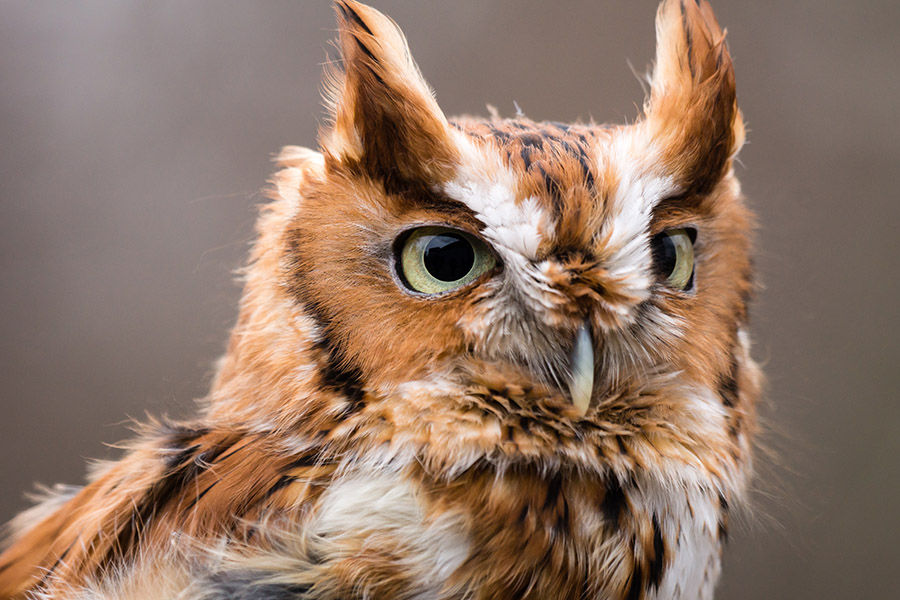 That strange noise you hear on your night hike might be coming from this red eastern screech owl. Photo: Becky Swora

When rocks turn into bears

A chilling sound stopped me in my tracks that night in the deep woods. Suddenly I heard something that reminded me of a child singing with a soft, quavering voice.

Ever so slowly I walked forward another 50 yards along the trail—then I heard it again, right above me. The ghostly sound was following me, watching me. Was it a bird of some kind? I would have heard wings flapping, right? No. It moved silently as if it were floating, haunting me once more with its despairing song, like that of a lost, lonely child.

Okay, it’s October, the month of goblins, ghosts, and things that go bump in the night. Actually, I knew what that sound was: it was the call of a screech owl, which can be eerie if you don’t know what it is. The reason I didn’t hear wings flapping is because the wings of owls are nearly silent as they fly in search of prey.

The screech owl is just one of many creatures that are more active at night, which makes night hiking an exhilarating experience if you’re willing to try. You might hear the cry of a distant fox and for an instant believe you’re hearing a woman screaming. The yips, yaps, and warbling howls of coyotes create an auditory illusion, making you think there are 20 of them when in fact there are only five or six.

Trails take on a refreshingly different look as well. Because of the change in depth perception at night, you may not even recognize that old familiar trail you’ve hiked a hundred times. My eyes strain to see the curious-looking dark spot up ahead. Turns out it was a familiar rock I’ve passed many times, but tonight my imagination turned it into a bear. That’s all part of the fun of night hiking.

A full moon brings its own special opportunity for night hikers. As its pale light is cast down upon the trail you can see well enough to turn off your headlamp or flashlight. As your eyes re-adjust, the woods take on a ghostly appearance.

On moonlit hikes I take at least two sources of artificial light with me, but I only use them in the darkest parts of the trail to avoid tripping. Some other safety tips in regard to night hiking include wearing layered clothing during the cooler months. Wear good hiking boots, and don’t forget to bring plenty of water, snacks, a knife and/or a multi-tool, waterproof matches, first aid kit, compass, emergency whistle, emergency shelter, and use the buddy system by bringing a friend along.

Finally, if you plan to night hike in an area with heavy bear activity, consult with park or land managers first. There is a slight chance that dark spot up ahead might really be a bear.