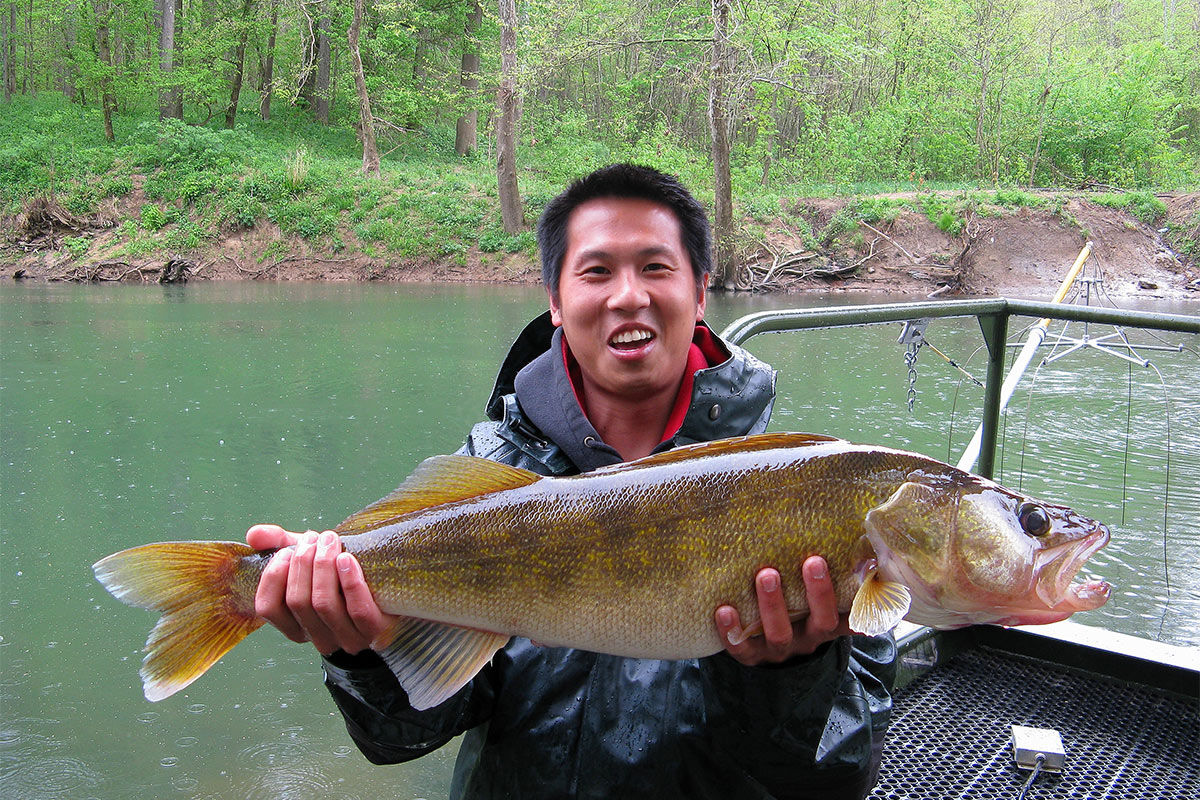 A generations-lost resident of the upper Kentucky River has come home.

Kentucky’s native walleye, a toothy fish that once thrived in the state’s free-flowing rivers before its disappearance from most of its range in the 1950s and 1960s, is being restored to the headwaters above Dam 14 near Beattyville. Native walleye fingerlings were stocked in several locations in each of the North, Middle, and South forks of the Kentucky River.

“It’s neat to think that maybe 50 years from now, we may have revived our native walleye populations,” says Dave Dreves, research biologist for the Kentucky Department of Fish and Wildlife Resources. “One day, anglers might be catching a new state-record walleye. I think that’s entirely possible.”

A combination of dams, poor water quality, and fishing pressure decimated the state’s native walleye populations more than half a century ago. The department responded to angler complaints about the loss by stocking a northern strain of walleye that thrived in the environments of Kentucky’s newly built lakes.

Rumors persisted, however, of giant walleyes still being caught in remote areas. Then, 20 years ago, the department submitted a large walleye caught in the headwaters of the Rockcastle River for DNA testing. It proved that Kentucky’s native walleye still existed after all.

Identifying the native fish was only the first challenge. Biologists had to find enough fish in the Rockcastle during spawning season to bring them to the hatchery to produce baby walleye.

Most days, fish-capture crews were fortunate to locate a handful of native fish. The biggest southern strain walleye captured by a fisheries crew measured 32 inches and weighed 15 pounds. It came from the Rockcastle River above Pulaski County’s Bee Rock in 2004.

Native fish did not take to the hatchery environment as readily as their northern cousins; eventually, though, techniques improved and the number of fish being stocked rose.

Since stocking began in 2002, several other areas have received the native fish, including the Rockcastle River, Wood Creek Lake, the Cumberland River above the falls, Martins Fork Lake, the Barren River upstream and downstream of the Barren River Lake dam, Drakes Creek, and the upper Levisa Fork.

This year, the department has stocked more than 150,000 walleye measuring up to 3 inches long. All those fingerlings came from just three female broodstock walleye—a testament to the work of hatchery personnel.

Dreves is excited about the project’s potential. “We’re always in favor of restoring a native species that’s been lost—whether it’s deer, elk, or walleye,” he says.

Anglers should take note: Kentucky’s native walleye mature faster and grow larger than the northern strain. “We’re getting broodfish weighing 8 pounds out of the Barren River,” Dreves notes. “We think water conditions have improved to the point where native walleye can make a comeback.”

Take the Harvest Information Program (H.I.P.) survey before you go dove hunting this month. Find it online at www.fw.ky.gov by clicking on the “My Profile” button.
Visit www.kyafield.com or call (800) 858- 1549 for more information.