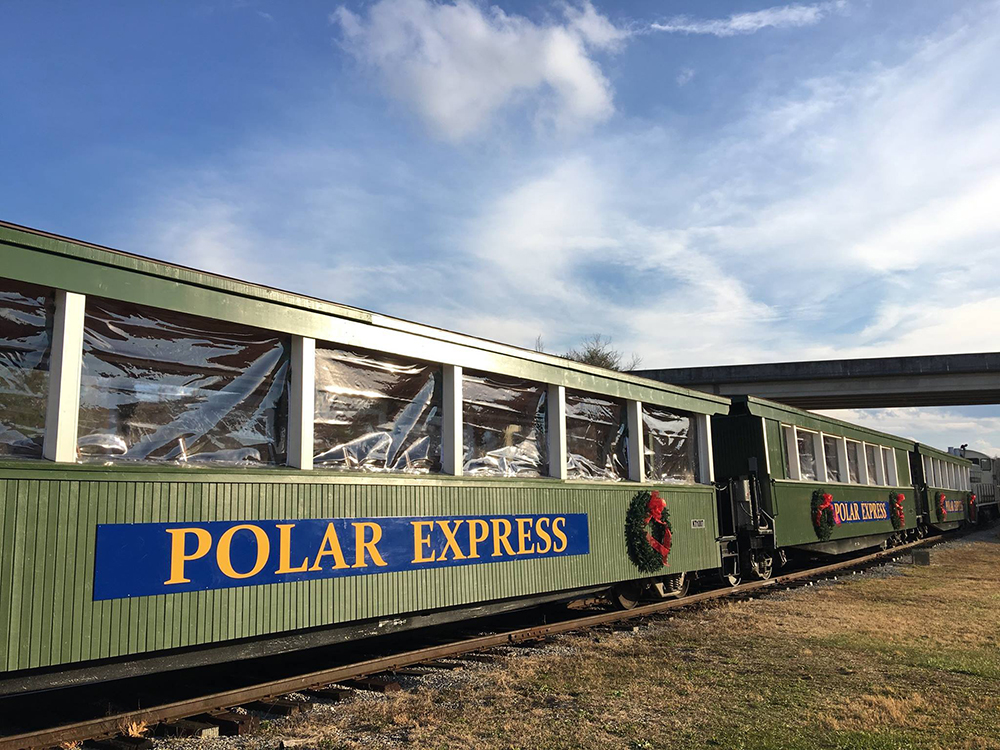 The Polar Express in Stearns awaits its next excursion to the North Pole. Photo: Louis Capwell

With hiking paths, whitewater rafting and mountain biking trails, McCreary County in the Daniel Boone National Forest has become a destination for adventure tourism and the exploration of some of the best parts of Kentucky’s natural landscape. The Big South Fork Scenic Railway, based in Stearns, runs through some of this striking scenery, along 7 miles of railroad once used to haul coal during Stearns’ early days as a mining town.

From spring through the fall, McCreary County hosts kayakers, hikers and mountain bikers, but as winter approaches, that traffic slows down. But visitors continue to come to Stearns for a ride on The Polar Express.

Based on the 1985 children’s book and its incarnation as a 2004 film, the attraction is offered in 50 locations nationwide, but was hosted by the Big South Fork Scenic Railway for the first time last year. It drew around 8,000 visitors over the course of the four weeks between Thanksgiving and Christmas, traveling from a classic depot to pass rugged Appalachian foothills, forest and waterways before heading through a tunnel to the “North Pole” site.

Drawing from the movie, the ride encourages families to wear their pajamas, just as the children in the film did. Guests enjoy cookies and hot chocolate on the ride, served by a crew of singing chefs. Upon arriving at the North Pole, guests meet Santa and his helpers, who join them on the train for the ride back. As in the story, Santa gifts each child a golden bell from his sleigh.

“They ring the bell nonstop the entire time on the way back. It’s very loud, but it’s super fun and we sing Christmas carols and dance in the aisles,” says Big South Fork Scenic Railway Executive Director Louis Capwell.

Capwell says it’s fun for all generations, not just children. “You get whole families, dads and grandpas included, showing up in their pajamas. Families really get into it—they’re really in the spirit of Christmas,” he says.

“Even the hard-to-reach tween and teenage market can actually get into it by the end of the event. It might be the optimist in me, but the kids’ favorite part is that they got to do it with their family and they had a great time,” Capwell says. “It also helps that there’s no cell reception, so you can’t hang out on your phone the whole time.”

While one of many across the country, the event in Stearns is very much a product of its community. This year’s cast of characters—around 30 students from McCreary Central High School—began rehearsals before the school year even kicked off.

“The entire community comes out to the event. We are so accommodating, and we’re so excited to show this place off. … This is such a beautiful, kind of sleepy little place and Rail Events and Warner Brothers (which created the ride) were really impressed that we were so eager to show it off, so ready to roll up our sleeves and do everything,” explains Capwell.

The North Pole itself is the work of the high school’s shop class students, who build the set for class credit and ride the train to the depot to install it.

“They take a week during school where they come down on the train and they construct the North Pole along the tracks,” Capwell says. “It’s really cool—it teaches these kids applicable skills and it gives them a sense of ownership over an event that really belongs to Stearns, belongs to McCreary County.”

The Big South Fork Scenic Railway has renewed its license for the ride for at least the next three years. This year’s attendance is expected to exceed last year’s, thanks in part to an extra week between Thanksgiving and Christmas. But repeat riders also are expected.

“Christmas is a tradition,” says Capwell. “It’s not uncommon for Polar Expresses that have been running for a decade to have families who come back every single year.

“The kids are exhausted by the end, so all the parents are happy,” he says with a laugh.

Michelle Eigenheer is a writer based in Louisville. She enjoys exploring new adventures across Kentucky.

Tickets are expected to sell out early; tickets available online; for questions call (606) 657-9491.

(in the Big South Fork)

A sight to behold when frozen over in the winter.

The most well-known natural arch in the area.

125,000 acres of protected lands, gorges, rivers and bluffs in Kentucky and Tennessee.