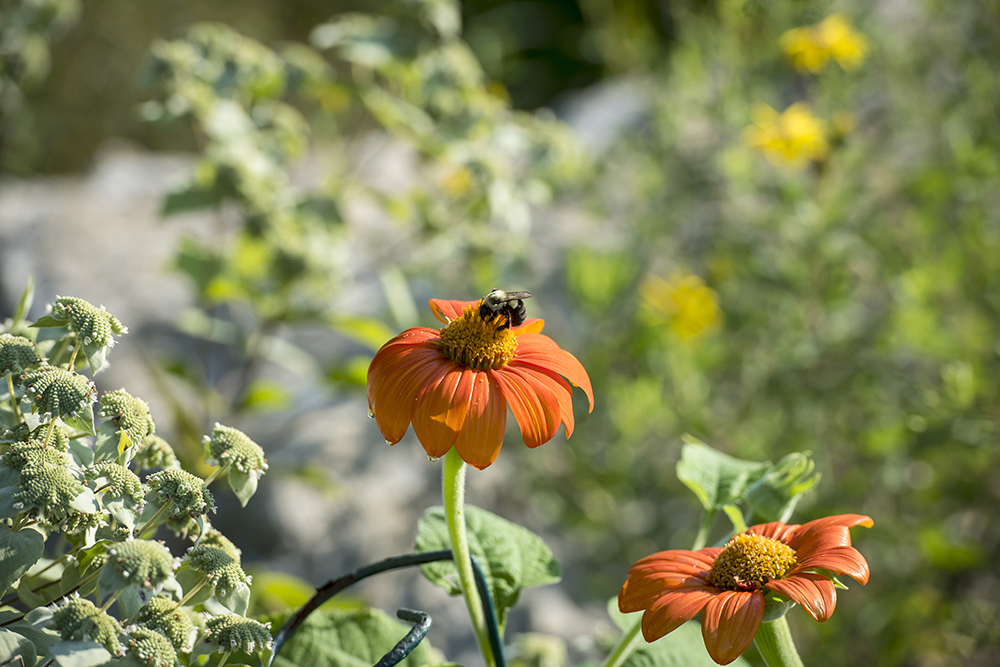 A bee sips nectar from a Tithonia, or Mexican sunflower, an annual that is native to the Americas. It combines well with the native short-toothed mountain mint, pictured at left, in pollinator gardens, Linda Porter says. Photo: Tim Webb

They were here first. They thrive in Kentucky’s climate. Many are good for pollinators such as monarch butterflies, which are declining in alarming numbers. They come in an array of colors and heights.

They are native plants.

For all their attributes—beauty, ease of care, variety—native plants usually are not among the popular offerings at nurseries or even in most home flower beds. That’s true even though native plants are essential to successful gardening and agriculture because they help pollinators like butterflies and bees. The health of pollinators affects the health of the food supply. On a smaller scale, they can make life easier for the home gardener.

“The entire country is trying to go with native plants in their area,” says Judy Ferrell with the Garden Club of Kentucky. “These plants respond better to drought and to changes in temperatures in that region. They can stand anything given to them because this is where they were meant to grow. By using native plants, insects also thrive because the nectar is provided.”

Native plant enthusiasts like Linda Porter, a member of Inter-County Energy in Danville, are on board. Porter fills her

diverse flower beds with eye-popping native groupings that distinguish themselves from traditional beds.

Like all gardeners, Porter has her favorites, including milkweed.

“It blooms early in summer,” she says. “I cut it back, and it comes back when the monarch butterflies migrate. It helps them make their journey.” Porter, an organic gardener, also loves long-blooming native perennials such as Agastache, or anise hyssop. She has both the native species of Agastache and the Agastache cultivar called Blue Fortune.

She also likes some of the “bad boys” of native plants, particularly a type of goldenrod known as elm-leaved goldenrod. It is not to be confused with early goldenrod, which she says is aggressive and not one of her favorites.

“Goldenrod has a bad reputation for causing hay fever and for spreading with the wind,” Porter says, “but it is actually pollinated by bees.”

She advises those with smaller gardens to be careful about which natives to plant. Many native plants do well in large areas like prairies and meadows where they have plenty of room to spread, “but they would take over your garden,” she says. Aggressive natives include compass plant, cup plant, Jerusalem artichoke, obedient plant and passion vine.

Native plants also include varieties that are often considered weeds by farmers and gardeners.

“Many herbologists consider these treasures,” Porter says, adding that these plants also are good pollinators. Dandelion, figworts and gum plants all make this list.

As Porter designs her garden, she takes into account whether a plant is good for pollinators and whether it provides food for the birds, along with the more obvious factors of height, color and bloom time. A mixture is considered ideal.

Jason Nally takes the same factors into account at Maker’s Mark Distillery, where his title—really—is environmental champion. His job is to set best practices for trees, water and native plants.

“We have a little over 30 acres in native grasses or mixtures of native plantings,” Nally says of the renowned distillery in Loretto. “We put perennials in to feed the birds, stabilize the soil and help the pollinators. There are honeybees on the neighboring farm. We want to keep them healthy.”

Nally, who previously worked for the Kentucky Department of Fish and Wildlife Resources, says the native plants not only look good, but they provide homes and food for small mammals, insects and birds.

“Native plants provide a habitat to meet the needs of diverse species,” he says. “So many different species rely on those plants.”

Finding healthy native plants can be more of a challenge, however, than shopping for more traditional ones.

“A lot of the natives aren’t going to be the showiest plants,” he says. “The natives tend to be a little more subtle. You need to get to know what characteristics the plant will have because it may not be readily apparent.”

Weber says knowing what you want out of the plant will help you determine the species you need.

“Do you want plants that provide food for wildlife or plants to provide seasonal interest for your enjoyment? Also, what kind of a site are you working with? Is it sunny or shady?” Weber says.

Native plants also require a different mindset when it comes to using fertilizers and pesticides. If you incorporate a native plant for butterflies, you don’t want to kill their caterpillars with chemicals.

“You don’t want the plants that almost look plastic because they are so big after being pumped full of chemical fertilizers,” Weber says. “That’s not to say the native plant should be diseased or unhealthy, of course, but you may not be looking for a specimen plant.”

Weber founded Springhouse Gardens 22 years ago—long before the native plant movement—because he could not find the plants he saw while hiking in places such as the Red River Gorge. His center offers native and non-native plants.

“Native plants connect us to the larger aesthetics and beauty of the planet,” she says. “They offer spirituality in that each is connected to pollinators and birds.”

The plants also offer much for the next generation, according to Littlefield.

“By protecting these important plants, we are allowing the next generation to see the beauty of natural places and preserve ecosystems,” she says.