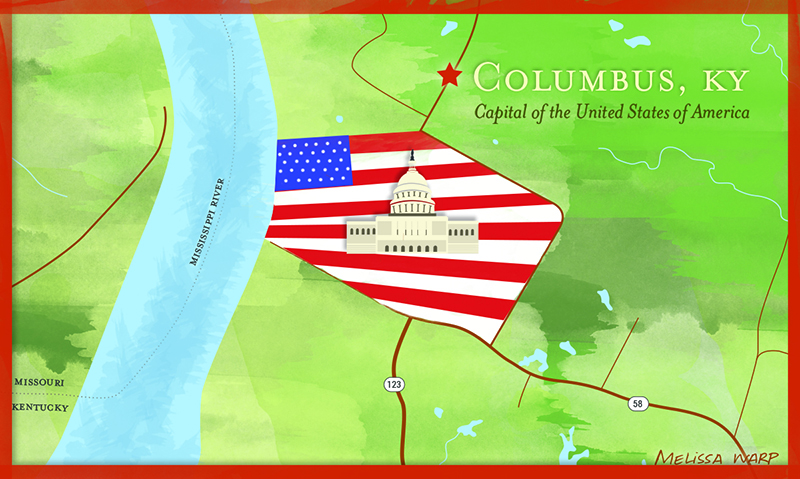 I can’t remember when I first heard that the small Hickman County village of Columbus, on the banks of the Mississippi River, was once considered as the site for the capital of the United States. But if you spend much time in western Kentucky’s Jackson Purchase region you’ll hear the story sooner or later.

It’s difficult to know exactly who started the tale in the very early 1800s, but before long, even Thomas Jefferson and James Madison were implicated.

A popular claim was that Jefferson, the nation’s third president, after negotiating the 1803 Louisiana Purchase, had a “definite” plan to move the nation’s capital to a more central location—said a 1949 editorial in the Phoenix (Arizona) Gazette, later quoted in the Hickman County Gazette.

Yet, Anthony—a retired professor of history and geography, a former resident of western Kentucky and graduate of Western Kentucky University, now living in San Antonio, Texas—says he has spoken to no one among the Jefferson scholars, from Monticello to the University of Virginia to Princeton, who has ever found documentation that Jefferson wanted to move the nation’s capital to Columbus.

Historians also note that the Kentucky land now known as the Jackson Purchase was not ceded to the U.S. by the Chickasaw nation until 1818.

Nevertheless, the legend has refused to die. An old state historical marker at the site reads: “Columbus was proposed as the nation’s capital after the War of 1812,” a claim that survives on an interpretive panel at the site, and on a related website.

In early 1870, Robert Summers, editor of the Columbus (Kentucky) Dispatch, (not to be confused with the later Columbus Hard Times) wrote: “…and standing on this site President James Madison once said, ‘here, some day, will stand the capital of the nation.’”

“Robert Summers loved to spin a tale, and this was a great story,” says prominent Hickman County writer/historian John Kelly Ross of Clinton, who credits enthusiastic publishers and local real estate con artists of long ago with keeping the story alive despite no basis in fact.

“There was nothing here,” says Ross. “In 1821, it was just a flat piece of land, surrounded by bluffs, that got flooded a lot. Who’s going to put the capital there?”

Columbus did become a strategic site during the Civil War, when the Confederate Army mounted large cannons on the bluffs and stretched a giant chain all the way across the Mississippi River to block Union gunboats.  The chain, each link of which was said to weigh 20 pounds, 5 ounces and measure 11 inches in length, soon broke from its own weight. Pieces of the chain are still on display at the site, which is now occupied by Columbus-Belmont State Park.

The massive chain may have broken, but the romantic legend of Columbus being considered for the nation’s capital has proved to be all but indestructible.