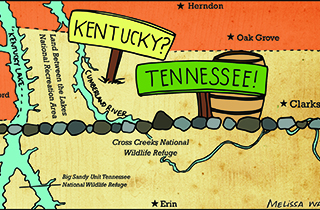 You may want to keep a Kentucky map handy for this one, folks.

Let your fingers do the walking along the Kentucky border to the southwest. Be careful of the little step-up just before Lake Barkley, and then the sudden drop-off on the west bank of Kentucky Lake. Your fingers might start wondering if they are in Kentucky or Tennessee.

Dr. Thomas Walker must have pondered the same thing in 1779 when he was trying to create the state line. The border established by his survey party has been a matter of dispute between the two states for generations.

Indeed, many professional surveyors believe that if Kentucky’s southern boundary were where it should be—it would cross Kentucky Lake about 16 miles south of where it does today. Other estimates vary from 12 to 18.

That would drop Kentucky’s entire southern boundary down to a straight line even with the correctly surveyed offset of Calloway, Graves, Hickman, and Fulton counties, placing Clarksville and many other Tennessee towns and historic sites in Kentucky.

Surveyor Jim Adams of Bowling Green notes that in 1859, following a few other attempts at correcting the line, both states gave up on yet another survey after discovering exactly how far south a corrected Kentucky line would have to be moved, how many Tennesseans would become overnight Kentuckians, and what a bureaucratic boondoggle would ensue. Heavy stone markers were set, essentially along the old “Walker line,” denoting the official boundary.

Hearsay has it that a landowner below the mysterious notch in Simpson County offered surveyors a barrel of whiskey to leave his place in Tennessee.

“Tennessee has been fortunate in nearly all of her disputes as to state boundaries,” former Tennessee Supreme Court Associate Justice Samuel Cole Williams wrote in a 1930 publication. “Her chief gains, in the match of wits, have been at the expense of Virginia and Kentucky.”

Paris, Tennessee, surveyor Larry I. Smith agrees with that. “We did all right,” he says with a smile.

In time, what once was a point of serious contention between the two states has been reduced to good-natured joking.

In fact, in 1990 surveyors from the two states joined in a search for the 64 stone markers that, in the 1850s, were set along the border from Bell County in the east to Fulton in the west.

“We found 38 of them,” says Adams, recalling that one had been used for some years as a weight on a local farmer’s disk harrow, until he found out how important it was and returned it to its place in the middle of a field.

Another of the displaced boundary markers—with “KY.–TENN.” chiseled on the sides—is on exhibit at the South Central Kentucky Cultural Center on Water Street in Glasgow.