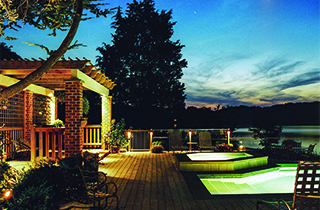 For some folks, outside lighting is all about drama—using lights for curb appeal, to show off a home’s best features. For others, it’s mostly practicality—with that huge spotlight blazing over the front door, chances are better no one will stumble down the steps in the dark.

Well-planned outdoor lighting can also be used as a security measure and a deterrent against crime. It’s important to note, however, that there is not universal agreement on how effective lighting is in preventing home break-ins. More than half of home burglaries for which a time is known take place during daylight hours (often when people aren’t at home), according to FBI statistics.

When using outdoor lighting for home security, keep in mind that bigger is not necessarily better. Too much exterior light can make it difficult to sleep, annoy the neighbors, or produce a glare, which actually reduces visibility and creates shadowy areas. Think strategically about what areas need to be  illuminated for safety and security. To get started, walk around your property at night to see what light already exists (from a neighbor’s house, for example) and where you most want to dispel the darkness.

Automating Brightness
Having lights that don’t stay on all the time—such as motion detector lights—can reduce energy consumption. Some lights operate on timers, which automatically shut on and off at preprogrammed times, or have photocell sensors that turn on and off at dusk and dawn. And some have combined features—meaning they come on at a particular time at a low setting, grow brighter with motion, then dim again when the motion stops.

Looking Good
The kind of light source you choose is as important as the placement. Read the package label to make sure the light source is suitable for outdoor use in your climate zone.

Two popular energy-efficient options are compact fluorescent light bulbs (CFLs) and light-emitting diodes (LEDs). LEDs tend to provide limited light output and may be best used to illuminate a specific spot, such as a doorway. While LEDs might be more expensive to start with, they are long-lasting and efficient, which could save money over time.

When using overhead lights, shields over the tops can reduce light pollution and concentrate the light downward rather than up. Consider using multiple low-wattage lights as opposed to one brighter pole lamp.

Make sure that whatever bulb you select will work with an automated system if that is part of your lighting plan. To make smart lighting decisions, you may want to consider hiring a landscape lighting designer.