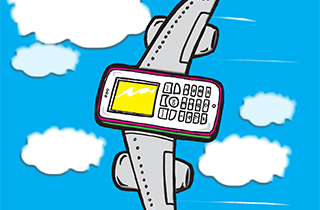 Many folks have learned (some of us the hard way) how to decipher the rules restricting liquids, gels, and aerosols when going through airport security checkpoints. We’ve abandoned our expensive bottles of salon shampoo and struggled to look polished and professional without our shaving cream. But what about electronics? What are the rules regarding all those gadgets?

For the most part, airlines recommend placing computers and expensive electronics in carry-on bags rather than checked luggage—important both to keep fragile items from getting smashed or broken and to protect them from theft. And remember that gate agents may ask passengers on some smaller jets to gate-check their larger carry-on luggage if the overhead bins are too small or crowded. Put electronics in a separate smaller carry-on bag that can fit underneath the seat, so you can be sure to keep it with you.

PLANNING AHEAD
Spare or loose lithium batteries are not allowed in checked bags because of the risk of fire, but can be carried on. Most batteries of the types used in consumer electronics are allowed in carry-on luggage. Charger cords can be placed in either checked or carry-on bags.

Digital cameras should be safe to send through the X-ray machines, but film may take extra care. The Transportation Security Administration warns that the machines can damage higher speed film with an ASA/ISO of 800 or higher. If you’re carrying undeveloped high-speed film, place the film in a clear plastic zip-top bag and request a hand inspection by the TSA agent.

TSA rules also state that some larger electronic items, such as full-size video-game consoles, full-size DVD players, and video cameras that use video cassettes must be screened separately at security checkpoints.

Give yourself plenty of time to get through security. If you’re not sure what to do, ask politely. And don’t argue with TSA agents. That almost never ends well.

TIME SAVERS
At the security checkpoint, smaller electronics such as cameras, e-book readers, cell phones, mp3 players, and tablet computers can be kept in your bags and sent through the X-ray machine. An exception is laptop computers—those generally need to be removed from your bags and sent through the scanner separately. Some manufacturers sell “checkpoint-friendly” laptop bags, with a separate fold-down compartment, so the laptop may be able to remain in the bag and be placed flat on the conveyer belt. For details, see www.tsa.gov/traveler-information/checkpoint-friendly-laptop-bags.

Another twist: travelers who have qualified for the TSA Pre-check program are funneled through separate security lines at some airports and don’t need to remove laptops from their carry-on bags. Your boarding pass will display the TSA Pre-√ designation if you are enrolled.