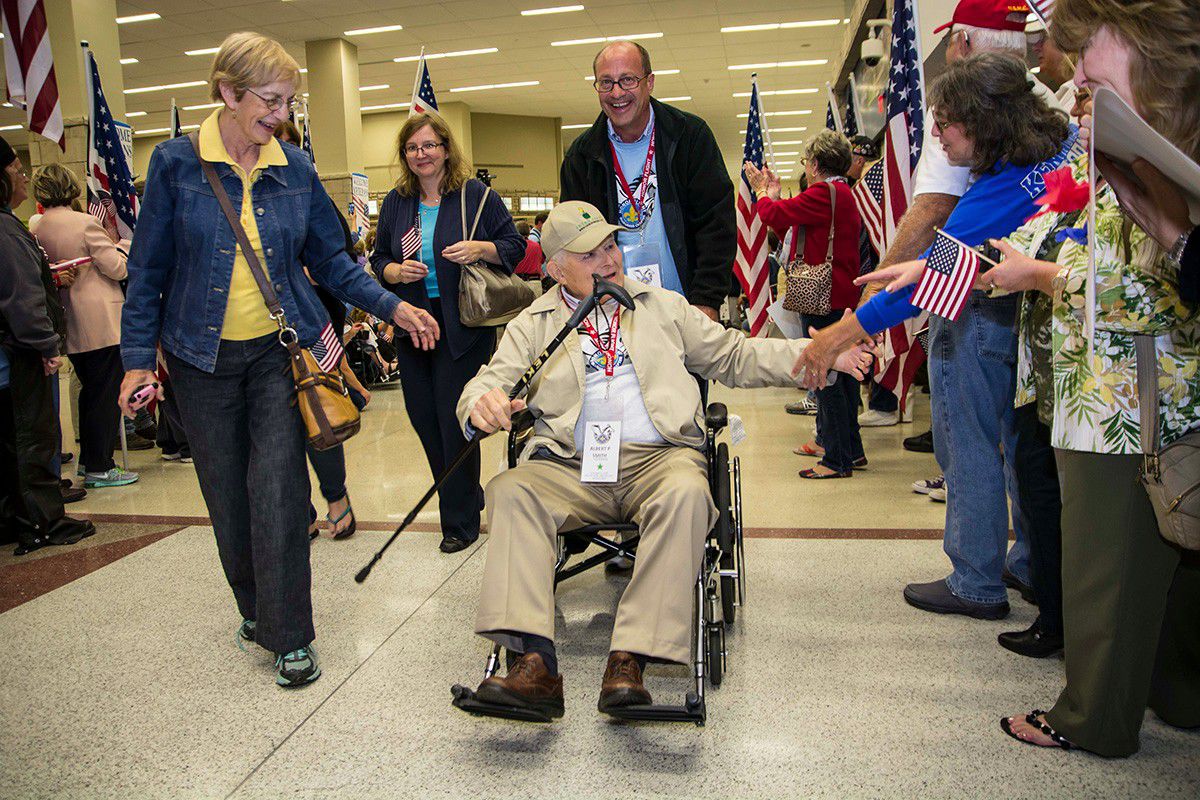 Kentucky journalist and World War II veteran Al Smith, Lexington, receives thanks and well wishes from those gathered to welcome home the veterans at Lexington’s Blue Grass Airport on September 25, 2015.

The first Honor Flight Bluegrass originating from Lexington lifted off early September 26 with a plane full of Kentucky veterans from World War II and Korean and Vietnam wars in order to tour their memorials in Washington, D.C. This was the largest contingent from the state ever to make the one-day whirlwind trip.

Leaving at 8 a.m. and returning about 9:30 p.m. to a “Welcome Home” celebration by a band of bagpipers and an estimated crowd of 1,500 flag- waving well-wishers, 68 vets, including 38 from World War II, were honored with the free flight sponsored by Kentucky’s Touchstone Energy Cooperatives, which include 17 not-for-profit electric co-ops, plus an anonymous donor. 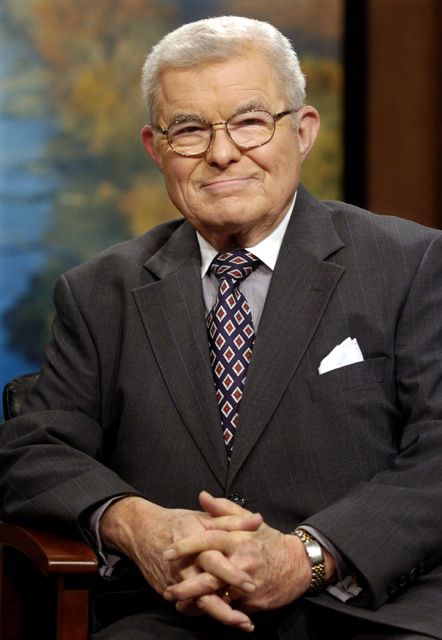 As a teenage Army volunteer in the last year of World War II, and now 88 years old, I was on this flight. Also aboard were my stepson Carter Hancock of Louisville and 67 other “guardians” (as in “angel guardians,” companions to aid and ease the old-timers through the long day), two doctors, two nurses, a photographer, and two Lexington TV crews.

The original Honor Flight originated 10 years ago with a physician’s assistant from Springfield, Ohio, named Earl Morse. While working in a VA (Veterans Affairs) hospital, Morse asked his veteran patients if they had seen their memorials in Washington, D.C. The tearful responses of many that they had not because they didn’t have the funds set Morse off on a campaign that saw six single-engine aircraft leave Springfield for Washington with 12 vets—the first effort of a movement that has expanded into 135 chapters of Honor Flight chapters across the country. The Honor Flight Network program has since flown approximately 150,000 veterans free to Washington and back to their home states.

Nearly 1,800 Kentucky veterans have flown to Washington from Louisville, but the September flight was the first mission to originate from Lexington, says Phillip Pittman of Lexington, an Honor Flight Bluegrass “ambassador,” or volunteer leader in the local Bluegrass Chapter. The honorees, recruited from Kentucky, visited the World War II, Korean, and Vietnam memorials, Arlington National Cemetery, and the Tomb of the Unknown Soldier.

Those signed up for the trip included 14 Lexington vets, a World War II vet who played basketball for Coach Adolph Rupp, former Miss America and now Kentucky Commissioner of Veterans Affairs Heather French Henry, and two retired colonels who were on active duty in three wars—Russ Reynolds, 97, Lexington, who served in the Army Air Corps in WWII, along with the Korean War, the Berlin Airlift, and in Vietnam. He will be inducted into the Kentucky Aviation Hall of Fame on November 7. Also on the flight was Arthur L. Kelly, 90, of Frankfort, author of BattleFire! Combat Stories from World War II, a compilation of interviews gathered over 10 years and published by University Press of Kentucky.

There are not many tomorrows left for the veterans of World War II. Of 16 million men and women in uniform who served in WWII, which began 74 years ago on December 7, 1941, with the attack on Pearl Harbor, a total of 400,000 perished from the United States. Slightly fewer than a million now survive. About 10,000 who served from our state are still living, but nationally their average age is 93 and they are dying at the rate of 492 a day. Of the 306,000 Kentuckians who entered the armed forces, 8,000 never returned.

Among them was Franklin R. Sousley, who was raised on a tobacco farm in Fleming County and was one of six Marines raising the flag on a mountain in an iconic photo on Iwo Jima. The Honor Flight veterans saw the Iwo Jima Memorial that stands at the entrance to Arlington Cemetery and was sculpted from that famous picture by Associated Press photographer Joe Rosenthal as the U.S. Marine Corps Memorial. Sousley was killed in combat on March 21, 1945, less than a month after the raising of the flag.

A friend of Sousley, Aaron Flora, 83, of Flemingsburg, who served in Korea in the Navy, was on the September Honor Flight. Flora was overcome with emotion at the sight of the monument, and wept as he told one of our companions about sitting up late with Sousley to say goodbye before Franklin left for the Marines.

Every vet had a story, from Gordon Wilson, 98, of Paris, a B-24 pilot in Africa, China, and Burma, to Paul Lewis, 90, Richmond, a Navy radioman on the Indianapolis, who was pulled off the ship as she weighed anchor at Guam just before she was sunk.

At the World War II Memorial, dedicated in 2004, we were greeted by a celebrated veteran, former U.S. Senator Robert Dole. Gravely injured in Italy as an Army officer, Senator Dole greeted our Kentucky veterans while sitting in a wheelchair near a tree that bore a marker thanking him for his service to veterans in advocating for the WWII Memorial, which is a small lake encircled by 56 granite pillars symbolizing the unprecedented wartime unity among the 48 states, seven federal territories, and the District of Columbia.

As he patiently posed for scores of pictures, I introduced Senator Dole to my son’s daughter, Lauren Hancock, who lives and works in Washington and had driven over to meet us. Then, as she chatted with Senator Dole, I remembered her other grandfather, now deceased, who flew in combat over Normandy in the invasion of France, and our other family hero of that war, my wife’s father, an Army colonel and physician who died of pneumonia at 33, leaving a widow and two small daughters who would grow up to become the mothers of six children between them, all now adults, and grandparents of Lauren and nine other children he would never see.

Then it was my turn to choke up.

As our plane circled Blue Grass Airport during the descent home, I was still in a somber mood, but my friend Colonel Kelly, father of Circuit Judge Dan Kelly, Springfield, also now retired, said he thought the trip was inspiring. So did Aaron Flora. They were sad about the losses, but they were still glad they came.

So, I concluded, was I. But, like others on that plane, I wondered why some great friends of my youth were taken and I was spared. Then I remembered a hero of that war, Philip Pendleton Ardery, who grew up on a Bourbon County farm, commanded a B-24 squadron, flying 25 combat missions, including leading 200 pilots in the skies over Normandy on D-Day in 1944. When he died at 98 three years ago, the Lexington Herald-Leader, citing his service to Kentucky as a lawyer for electric cooperatives bringing power and light to rural Kentucky, his wartime service to his country, and years of service to society’s disenfranchised and forgotten, declared he had “excelled in service.”

When we became friends, I asked Phil if his peacetime career was to pay back escaping death in the war. “I don’t know,” he replied. “But I guess I used up somebody else’s luck.”

On a separate trip to Washington, DC in October, KAEC’s new Vice-President of Strategic Communications Joe Arnold and his family arrived at the World War II Memorial as veterans from an Honor Flight were visiting. Former U.S. Sen. Bob Dole (R-Kansas), a veteran wounded in action in World War II, was there to greet the veterans. Dole was an instrumental force in the building of the WWII Memorial. Joe asked Dole to explain the memorial’s significance to his two sons, Sam (11) and Henry (9).