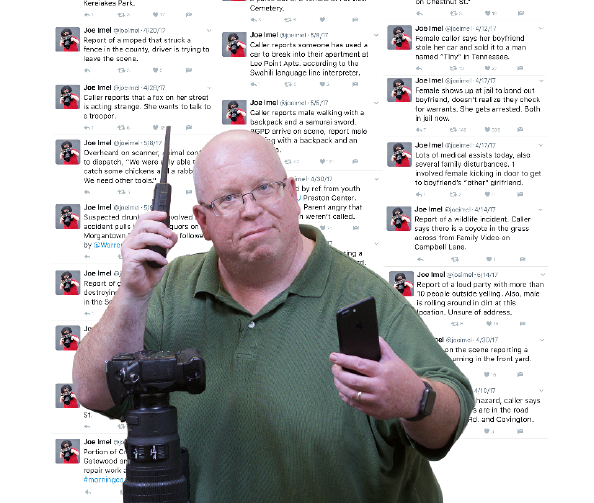 You have nearly 43,000 Twitter followers @JoeImel—a brand. What’s the trick?
Joe Imel: I think it is my sense of humor for picking out the funny and not-so-funny moments that occur in our community every day. Twitter has given me the ability and reach out to nearly 43,000 people in a city of 65,000 and a county of 120,000 what is going on. In this day and age, when you hear sirens, why should you not know what is happening.

I have been very diligent about tweeting, the frequency helps. Also, my position at the Daily News lends itself to the success. There has been an incredible response from the community. People have come to rely on it as a source of news. Once I tweet that news has happened. I will tweet when we have a story that explains beyond the 140 characters that initially put out there. Everyday someone will stop me say they love my tweets, or I helped find a lost pet, or they will recount their favorite tweet. Several agencies in the city and county have upped their Twitter presence and will routinely tag me or use my tweets.

How long have you been on Twitter?
Imel: I joined Twitter in 2008, but didn’t really start using it like a do now until about 2011.
It really started as a way for me to let people know all the crazy things that are happening out there. Reality is stranger than fiction. Over time, it became as much about letting people know about wrecks, traffic congestion, fires, shootings, crime, and other news. When people realized the reach I had in this community they started tweeting at me about their lost pets. I probably help find more lost pests in the area than anyone.

What do you do for a career, and how does tweeting complement your job?
Imel: I am the director of Media Operations at the Daily News in Bowling Green. I have been there for 25 years. I started out as a photojournalist and we built a strong staff that covered the community visually. I moved up through the ranks of the paper to photo editor, assistant managing editor, online director, and about three years ago was promoted to my current position where I oversee print, online, and future platforms we have to deliver news to our subscribers and readers.

One might assume working for a newspaper that you have always used scanners to scoop the news and get photos—so was it a natural progression to turn to Twitter?
Imel: Working as a photojournalist for 30 years, I have always listened to a police scanner to know when and where the news was happening in the community. It just became an extension me as a storyteller. I really enjoyed knowing what was going on and letting people know. Before social media was around, I used to tell stories about what I heard on the scanner to groups that I was around, list on the sidelines of my son’s soccer games 18 years ago. I’ve always had this in my blood.

What inspired you to get into the career you are in now?
Imel: I used to paint and sculpt and was going to become an art teach and a football coach. My father was a career military officer and Ft. Knox was his last assignment so I decided on Western Kentucky University. I studied (not very well) art for the first semester and decided to switch majors. I had always had the camera that my dad brought me from a deployment in Turkey. I had no idea WKU had such a great photojournalism program. I stumbled into my passion by accident. I eventually left school to start working in the state at a newspaper and fell in love with community journalism.

Is there an old-time newspaper reporter, in real life or on a television show, that you identify with, and if so, how so?
Imel: The most inspirational journalist to me was Ed Reinke. Ed was the Associated Press staff photographer based in Kentucky. He was an award-winning photojournalist that cultivated a group of photographers at member papers across the state. Ed’s mentorship was key to me becoming successful. He died tragically in 2011 while covering an IndyCar race at Kentucky Speedway in Sparta.

Tell us about the Tony Rose radio show on D93 in Bowling Green that shares the ‘Best of’ Joe Imel tweets.
Imel: Radio personality Tony Rose (@tonyroseshow) of D93 WDNS started reading some of my funnier tweets in a British voice with the Game of Thrones music playing in the background. It has become very popular and it really very funny.

Do you sleep? If so, when?
Imel: Hahahahah, I have to turn the scanner off at midnight and then back on at 5 a.m. I do have a few faithful followers that stay up late and will text me if something big happens.

How much time do you spend on Twitter?
Imel: I am paying attention to Twitter and/or the scanner about 17 hours a day.

What type of tweets get the most shares or likes?
Imel: The tweets that get the most reaction are the dumb criminal tweets, like the guy that stole a car, and when he ran out of gas, he called KSP for help. He got arrested. I could go on and on.
I don’t use people’s names or editorialize. I tweet what I hear. I don’t put law enforcement in danger. I wait to tweet after the fact if it is a tense situation. Local law enforcement has be great to me. I used to be out their shooting pictures of what they were doing, now I just tweet.

What’s one of your funniest most recent tweets or retweets?
Imel: Out of 41,000 tweets its really tough to say. There have been so many. Just scroll though my feed and one will pop out.

Do city groups and business count on you to get the word out with your tweets?
Imel: I have many businesses as well as city and county government agencies that will often rely on me to push out messages about news they need to get out the community. Warren RECC will often tag me on a post about power outages and updates on repairs. They, as well as Bowling Green Municipal Utilities have really solid social media presence. The local law enforcement agencies and the city and county will send me news that they need help in spreading to people, i.e. lost children etc. I sit from the safety of my home or office and tweet. The law enforcement officers and first responders are the people that are out there in the trenches that rushing toward danger or working to help us.

Tell us about one of your tweets that saved a life or changed history.
Imel: I don’t know that I have made one huge impact, but I know that every day I provide a little levity, information and news to a lot of people. I think that my impact in the community is letting people know about the everyday events that weave us tougher as a community both good and bad. I think most of my followers will tell you there has been one tweet that has impacted them in a certain way. The tweets range from funny, to the scary, to the sad.

Another one of the unintended benefits is the community involvement and crowd sourcing of journalism in the community. Followers will let me know about news or send photos or updates on tweets I have sent out. A lot of people in town will check my twitter account before traveling to see if there are any wrecks or traffic issues.

Do you have a nickname on Twitter, or a name that people refer to you as?
Imel: No, but most people that I run into often ask how I pronounce my last name. At least once or twice a week, someone I don’t know that follows me will stop me and ask, ‘Is it ih-mel or i-mel?’ I had a young lady stop me in Home Depot last week, who said there was a family argument about the pronunciation of my last name.

Editor’s Note: If you recognize Joe Imel’s name, it may be because he does freelance photography, including for Kentucky Living.