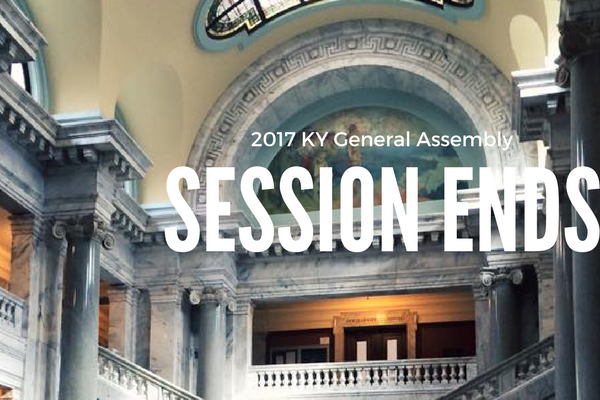 FRANKFORT—The 2017 regular session of the Kentucky General Assembly ended Thursday evening shortly before midnight after months of work that led to passage of over 130 bills that will impact most areas of Kentucky life, from public education to the fight against drug abuse.

Most new laws—those that come from legislation that don’t contain emergency clauses or different specified effective dates—will go into effect in late June.

A partial list of bills approved this year by the General Assembly includes measures on the following topics:

Abortion. Senate Bill 5 prohibits abortions in Kentucky at or after 20 weeks of pregnancy. The prohibition does not apply in cases where an abortion is required to save the life or prevent serious risk of permanent bodily harm to the mother.

Autopsy photos. House Bill 67 will limit distribution of autopsy photos, videos, or other autopsy images to law enforcement, attorneys, or others with a right to the information. The measure, named Jack’s Law, honors a Kentucky child killed in an accident whose autopsy photos were distributed to the media against his parents’ wishes.

Bible literacy. HB 128 will allow schools to offer an elective social studies course on the Bible that teaches biblical content, characters, poetry, and narratives and their impact on today’s world.

Coal fields. HB 156 establishes the Kentucky Coal Fields Endowment Authority to fund improvements to infrastructure, water, economic development, public health, and technological access in the east and west Kentucky coal regions. Improvements will be funded with $7.5 million in state coal severance dollars, and projects will be selected based on their economic development and job creation potential and their ability to be self-sustaining.

Driver’s licenses. HB 410, known as the REAL ID Bill, will create a voluntary travel ID or enhanced driver’s license to board airplanes and enter federal facilities, including military facilities, as of Jan. 1, 2019. The legislation is designed to meet anti-terrorism standards in the federal REAL ID Act passed by Congress in 2005. It also spells out rules for issuing a “standard” driver’s license, permit, or state personal ID card.

Education reform. SB 1 will create new rules for how students are taught and tested and how teachers are evaluated in Kentucky public schools. The legislation will require a review of academic standards in the schools beginning next school year and every six years thereafter while implementing a performance-based assessment of student learning and new benchmarks for measuring college and career readiness.

Emergency vehicles. HB 74 will only allow white light to be emitted from motor vehicle (including motorcycle and moped) headlamps, although non-halogen headlamps will be allowed to emit a slight blue tint if they were factory-installed. The intent of the bill is to make it easier for motorists to distinguish emergency vehicles from non-emergency vehicles. Fines will be levied for violations.

Fentanyl and other opioids. HB 333 would create strong penalties for trafficking any amount of heroin, fentanyl, carfentanil, and fentanyl derivatives that are destroying Kentucky lives and families. It would also clarify definitions and requirements for the prescription of controlled substances, define prescribing authority within long-term care facilities, and allow the Cabinet for Health and Family Services Office of Inspector General to investigate patterns of prescribing and report irregularities to appropriate authorities.

Hate Crimes. HB 14 will allow an attack on a first responders, such as police, fire fighters, and EMTs, to be considered a hate crime. Current state law considers it a hate crime if an attack is based on the victim’s race, color, religion, sexual orientation, or national origin.

Hemp. SB 218 is designed to improve the state’s industrial hemp production program, first established in 2014. This year marks the commonwealth’s largest industrial hemp crop under the program with more than 12,000 acres approved for production.

Juvenile offenders. Senate Bill 195 will help some juvenile offenders have their criminal records expunged. Currently, children convicted of a misdemeanor must go through a court process to have their records expunged. Senate Bill 195 will create a process for expungement of felony juvenile records two years after the offender reaches adulthood or is released from commitment. However, anyone who has convictions for felony or public offenses in the two years prior to applying for expungement or who has pending charges would not be eligible for expungement.

Labor unions. SB 6 requires public or private employees (with some exceptions under federal law) to request membership in a labor union in writing before they can be enrolled in that organization. It also specifies that dues or fees paid to labor organizations cannot be withheld from earnings without employee approval. Existing agreements between employers, employees, and labor unions made before the legislation takes effect would be exempt.

Playground safety. HB 38 will ban registered sex offenders from public playgrounds unless they have advanced written permission to be on site by the local government body (city council, etc.) that oversees the playground.

Postsecondary education. SB 153 will establish performance-based funding for state colleges and universities by basing state funding for all but mandated programs on the schools’ student success rate, course completion, and operational needs.

Primary care agreements. SB 79 will allow patients to enter into contracts with their primary care provider that spell out services to be provided for an agreed-upon fee over a specific period of time. The “direct primary care membership agreement” would not require a patient to forfeit private insurance or Medicaid coverage.

Religious freedom. SB 17 will specify in statute that Kentucky public school and public college and university students have the legal right to express their religious and political views in their school work, artwork, speeches, and other ways.

Retirement transparency. SB 3 requires that the retirement benefits of current and former General Assembly members be made public. Disclosure would include the member’s name and estimated or actual monthly allowance.

Right to work. HB 1—the House majority’s top priority for this session—makes Kentucky the 27th state nationally to enact right-to-work legislation. It prohibits Kentuckians from being required to join labor unions as a condition of employment.

School calendars. SB 50 will allow school districts to use a “variable student instructional year” that would require the same hours of instruction now required by law but allow for fewer school days than the minimum of 170 days that the law requires. Districts could instead use the variable schedule beginning with the 2018-19 school year if their first day of instruction is on or after the Monday closest to Aug. 26.

Ultrasounds during pregnancy. HB 2 requires a woman seeking an abortion to have an obstetric ultrasound of her baby explained to her by her healthcare provider before she could give required informed consent for an abortion. Women could decline to see the ultrasound image or hear the fetal heartbeat if they choose.