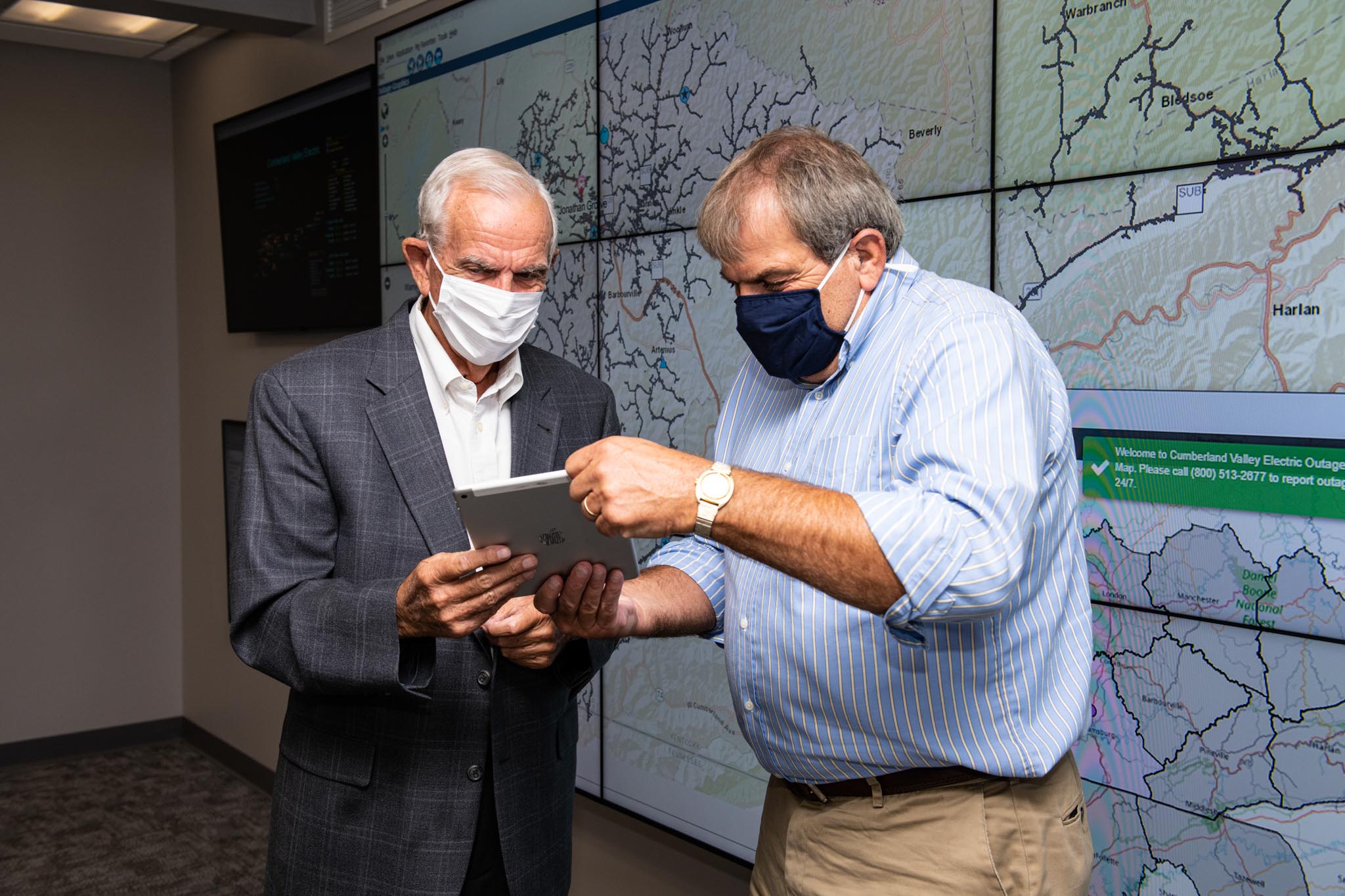 Ted Hampton, left, and Director of Economic Development and Marketing Rich Prewitt at the co-op office in Gray in September 2021. Photo: Tim Webb

Ted Hampton was a 23-year-old PE and history teacher who “didn’t know a thing about electricity” when he was plucked from the faculty at Knox Central High School to become the distribution manager at Cumberland Valley Electric in 1964.

Once one of the youngest distribution managers in the country, Hampton is the longest serving in Kentucky history and has the 10th longest tenure in U.S. history. Only one other active co-op leader has served longer, hired five days before Hampton, according to benefits administrators at the National Rural Electric Cooperative Association.

“I love it every day,” Hampton, 75, says at his office in Gray, Kentucky. “I look forward to getting up, going to work, and doing the job. It’s like a big family here. Everyone does a good job, and we are able to associate with leaders in the community.”

Hampton and Kentucky’s rural electrification grew up together. The Little Brush Creek one-room schoolhouse he attended through eighth grade had no electrical service. It was heated by a pot-bellied stove in the middle of the school.

Hampton’s uncle, Bill Hampton, had been manager at the southeastern Kentucky cooperative for 10 years when he suffered a sudden heart attack and died in 1964, his nephew recalls.

“The managers approached me to see if I would be interested in the job,” Hampton says. “The co-op had a great reputation in the community. I talked to my father and he said ‘Go for it.’”

But Hampton needed help learning the ropes. He credits Sam Hord, then manager at South Kentucky RECC, based in Somerset, for mentoring him.

“I was the new kid on the block,” Hampton recalls. “If I had any tough decision, any question, Mr. Hord was there to help me. He took me under his wing and helped me tremendously. I never took a bad piece of advice.

“I am always eternally grateful to the folks at South Kentucky RECC,” Hampton says.

The elder statesman of Kentucky’s electric cooperatives has returned the favor, many times over.

“Ted Hampton is the dean of Kentucky co-op managers,” says Michael “Mickey” Miller, president and CEO of Nolin Electric Cooperative, Elizabethtown. “His advice and counsel is always sought whenever a major decision is necessary.”

In December, Hampton completed his second term as board chairman of the Kentucky Association of Electric Cooperatives. He had also served as KAEC board chairman in 1995.

“Ted has been a leader and mentor for the cooperatives across the state of Kentucky,” says Chris Perry, KAEC president. “He is not always the most vocal, but when he speaks everyone listens. He has been instrumental in the growth and development of the Kentucky Association of Electric Cooperatives.”

“His positive, caring attitude and commitment to the rural electric cooperative members increases morale and ensures a high level of performance for the Kentucky Association of Electric Cooperatives board of directors. Ted is truly an outstanding role model.”

“The whole world has changed,” Hampton tells Kentucky Living. “Back when I started, the main job was getting bills out and keeping the lights on, but now it is much more difficult. Regulations are killing us.”

Hampton remembers his initial goal in the 1960s was to reduce the cost of electricity to 1 cent per kilowatt-hour.

“We got it down to 1.2 cents per kilowatt-hour,” Hampton says, “but now it’s 9 or 10 cents, and with all the regulations and what they’re doing to the coal industry, it may rise to 15 cents.”

The intersection of rising electricity rates and the decimation of the coal industry, part of the economic fabric of Cumberland Valley’s service area, has Hampton worried about his neighbors.

“We’re going to be in trouble,” Hampton says. “With all the regulations, I’m concerned that electricity will be so expensive that the people in eastern Kentucky will be unable to pay their power bills.”

“We’ll find a way to serve the people,” Hampton continues, “but in our service area, we have lost so many jobs, they are hurting.”

Local co-ops need to do everything they can to contain costs for members and enhance education and communications, Hampton says. He has embraced technological advancements and encourages co-ops to share best practices with each other.

“There is a lot of knowledge in the cooperative world. You’ll find anyone in Kentucky is willing to help you,” Hampton says. “You save a lot of time and a lot of money and it’s good for the whole program.”

“Our power lines go across the river and across mountains,” Hampton says. “It is difficult for equipment to access many of those areas.”

Since 2004, the 21,000-member cooperative has implemented electronic mapping of all equipment and facilities.

“For more than half a century, Ted Hampton has led Cumberland Valley Electric with a simple philosophy: lowest possible cost of service, community involvement, and quality service,” says East Kentucky Power Cooperative (EKPC) President and CEO Tony Campbell. “My career has afforded me the opportunity to meet many electric cooperative leaders, and I would put Mr. Hampton in the elite class of these (cooperative) leaders. Over the past seven years, Mr. Hampton has been gracious enough to spend a significant amount of his time mentoring me, and I believe his coaching has made me a much more effective leader.”

Campbell says Hampton is consistently one of the first leaders to offer assistance when EKPC faces challenges.

“On many occasions, Mr. Hampton has given me advice that was not necessarily what was best for him, but was good for all cooperatives in general,” Campbell says. “He spends much of his time traveling the 140 miles across his service area, helping the people he’s known his whole life. He lives the co-op spirit, and he truly believes in─and practices─cooperative principles.“

His fellow distribution managers in Kentucky regard Hampton as a member of their families.

“Ted is almost like a father to some of us,” says Licking Valley RECC General Manager and CEO Kerry Howard. “He is always there for us and gives us great advice and always willing to help. Some of us even call him ‘Pops.’”

“Uncle Ted always brings clarity to the Kentucky co-op program,” says Pennyrile Electric President and CEO Greg Grissom. “He is a wonderful asset for advice and knowledge and a good friend.”

“I have known Ted Hampton for over 30 years,” says Taylor County RECC Manager Barry Myers. “His honesty and integrity are unequaled. I am blessed to be able to call him my friend.”

“If I was a young manager starting out today, I would try to find a manager with several years of experience,” Hampton says.

“He’s always one of the first to hold out his hand to welcome a new CEO,” says Debbie Martin, president and CEO of Shelby Energy in Shelbyville. “Most all of us have been touched by the wisdom and knowledge that Ted brings to the table.”

Hampton’s co-workers in southeastern Kentucky cannot imagine a co-op world without his leadership.

“Ted Hampton will not be fully appreciated for his service to Cumberland Valley Electric until someone or something has to do his job,” says Rich Prewitt, Cumberland Valley Electric’s director of Member Services. “He is so knowledgeable about the people that make up our members and the infrastructure of our lines that his guidance and leadership are just intuitive. He operates under the philosophy that there is never a time to do something wrong, it’s better to just do it right the first time. In serving our membership there are no gray areas, you always know where Mr. Hampton stands for, and that’s what is best for our members.”

Sixty-three years after he attended Little Brush Creek school, Hampton now owns the one-room schoolhouse near his home. He uses it for storage.

“It still does not have power,” Hampton laughs.

Fifty-one years and counting, Hampton plans to stay on the job “as long as my health holds out, and I’m doing a good job for Cumberland Valley.”