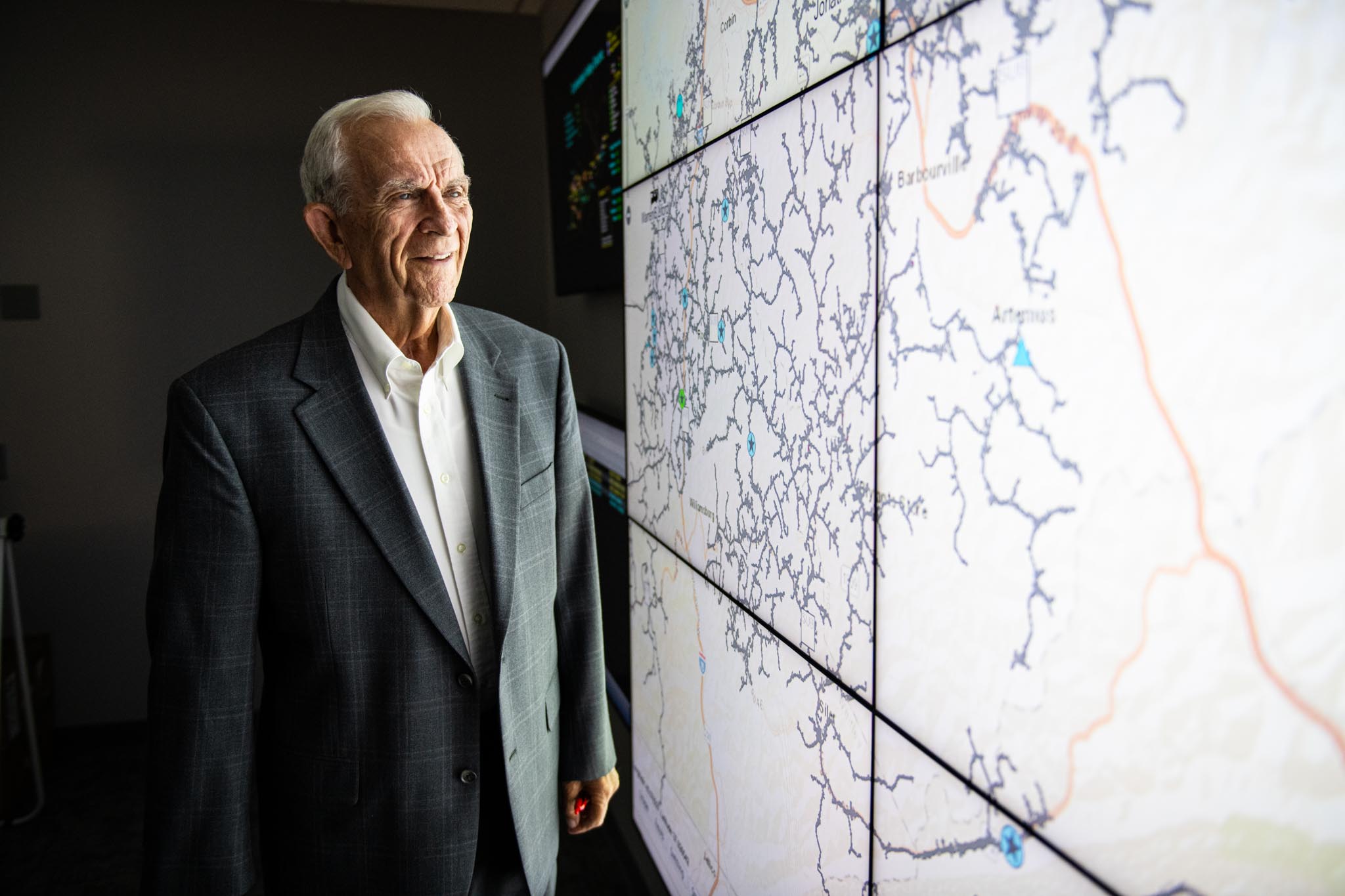 Octogenarian Ted Hampton, CEO of Cumberland Valley Electric, beat a near-fatal case of COVID-19 and is back on the job today. He made good his vow that he would “fight like hell” if he ever got the virus. Photo: Tim Webb

One month shy of his 81st birthday, Ted Hampton emerges from the offices of the southeastern Kentucky electric cooperative he has headed since 1964 to greet guests in the co-op lobby.

On this warm August day, he’s just completed his regular office-to-office check-in with Cumberland Valley Electric employees, turning his attention to visitors from United Utility Supply, showing them the office space the co-op provides as a service to Kentucky State Police.

That an octogenarian is the full-time CEO of an electric utility is certainly remarkable. But for Ted Hampton in 2021, it’s just the beginning of his story.

In mid-December, five days after being diagnosed with COVID-19, the stubbornly strong Brush Creek native buckled.

“His oxygen levels were alarmingly low,” Hampton’s wife, Margie, recalls. “After an ambulance rushed him to the ER, they put him on the ventilator immediately. The doctor came out and told me ‘I don’t think he’s going to make it.’

Margie sobs as she relives her disbelief and the rush to airlift Ted 100 miles to Pikeville Medical Center because the Corbin hospital did not have any intensive care unit beds available.

Safety protocols prohibited hospital visitors. When Margie was finally able to see Ted several weeks later, he had not made any progress and had reached the maximum length of time he could be intubated. Doctors asked Margie to make a critical decision. Should Ted remain on life support? If so, they would remove the tube threaded down his throat and replace it with one inserted into his trachea that would connect to a ventilator to keep pumping oxygen into his lungs. Would he want that?

Margie says Ted’s brother, Elbert Hampton, recalled a recent conversation he had with him.

“Ted said, ‘If I get this COVID, I am going to fight like hell, because I’ve got too much to live for.’” Margie says Elbert told her.

“I do not remember one thing. Zero,” Ted explains. “All I know is I was in a coma and on a ventilator.”

Ted was still alive, but his fate was unclear. Margie says a prayer with their pastor, Paula Farmer, ended by “asking God to just go in the room and touch Ted on the shoulder.”

That night, after reading her Bible and saying her prayers, Margie dreamed she was in the hospital room with Ted, “and suddenly the Lord just appeared in the room ….

“I would explain it to you if I could. He just appeared in the room, and I sat down toward the foot of the bed, and He just came in and laid His hand on Ted’s shoulder,” Margie weeps at the memory and its sweet assurance. “I called my pastor the next day and told her about the dream. And I said, ‘He is going to be all right.’ And, not long after that, he started improving.”

The long road to recovery

After 41 harrowing days in Pikeville, Ted was transferred on January 29 to the Rockcastle Regional Hospital and Respiratory Care Center. He was still relying on a ventilator, but improving each day, to the astonishment of the medical staff.

“It can be a very long process, especially with COVID, to totally wean yourself off a ventilator and get rid of that trach,” says Emily Valentine, the center’s inpatient rehab director.

“Ted was fiery and motivated, which really bodes well for therapy,” she says. “We just really enjoyed having somebody who wanted to work at therapy, wanted to get better and had many things in life he wanted to get back to.”

Chief among them: Ted and Margie’s 12-year-old granddaughter, Tori, who they are raising after the death of their daughter, Amy, in 2013.

“He was very concerned about Tori, and where Tori was and who was taking care of Tori,” Valentine says.

Margie adds, “Even when he didn’t recognize anybody. He didn’t know me. He didn’t know his brothers. But he knew Tori every time. He always knew Tori. He loves her like sugar. She was his inspiration.”

And he needed it. Before he could return home, Ted had his work cut out for him.

“I had to relearn how to walk, talk, eat, swallow,” he says. “And I’ve been on physical therapy the last four months.

“That’s a terrible experience. You’re so weak, you have to have someone with you or a walker when you first get up so you don’t fall and hurt yourself. They would walk me up and down the hallway. Just like you take a little child and hold their hand, that’s what they did so I wouldn’t fall. They would do that two or three times a day until I was strong enough to do it myself.”

His recovery isn’t just a physical exercise, but a mental one as well. Ted was surrounded by unfamiliar faces in an unfamiliar place, so his family, friends and co-op family joined Margie and Tori at their home for FaceTime calls with him, and Margie sent photos and Ted’s favorite reading materials.

“He loved to read Kentucky Living and the newspaper,” Valentine says, “anything that would keep his mind sharp and jog his memory.”

Forty-five days after Ted was transferred to Rockcastle Regional, the trachea tube was removed. He was finally breathing without assistance for the first time in three months. On March 31, after 103 days of hospitalization, Ted returned home, just in time to celebrate Easter at New Hope Ministries Church of God.

“When I walked into church, the pastor said, ‘We have a miracle boy with us today. Here comes Mr. Miracle. God has saved him for a purpose.’ And I agree with that,” Ted says. “Prayer is extremely important. And friendship. Friends at church and at work and acquaintances. Those are all important and give you encouragement.”

“Within a week of coming home, he was back in the office,” says Rich Prewitt, Cumberland Valley Electric’s director of economic development and marketing. Prewitt served as interim CEO in Ted’s absence, fielding hundreds of requests for updates on Ted’s condition from his large network of friends, elected leaders and electric co-op admirers from across the country.

“He wanted to come back and sit at his desk. A week later, he was driving to work, and a week later he was back full time,” Prewitt says. “He’s an incredible leader and an incredible example of strength, will and determination.”

A COVID-19 vaccine was not yet available when Ted caught the virus. He is encouraging co-op employees and their families to get the shots.

“This stuff is really dangerous. And I want to tell everyone not to underestimate how dangerous it is,” Ted says. “They should step up and get the shots. If they don’t do it to protect themselves, then to protect their families and protect their neighbors and schoolchildren.

“When I am out in public, I have my mask on. I have two or three of them in my vehicle. And I’m careful to avoid crowds and not be exposed to it.”

Though Ted is back at work full time, he says he’s still weak and not at full strength.

“The doctor said it would take six months to a year to get back to where I was,” he says. “Normally, in the last month I would be going to the farm, driving a tractor, bush hogging, taking care of my honeybees.”

He plans to be back on a tractor by springtime, with gratitude for those who cared for and prayed for him, and an urgency that Kentuckians take COVID-19 seriously.