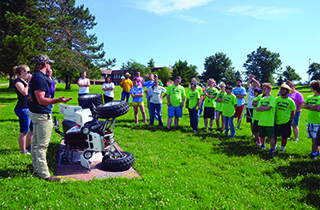 Jeffrey Carter is a high school junior with a plan. He wants to be an agricultural photographer.

Just months ago, Carter, a student at the Kentucky School for the Deaf (KSD) in Danville, didn’t know agricultural photography existed as a profession or that it might be the career for him. That all changed one day at the school’s annual Ag Camp, the only camp of its kind in the United States, according to Sandy Smock, agriculture-education instructor/FFA advisor and Ag Camp director.

Carter’s revelation was one of many he and his classmates made during the two-week camp as they experienced the vast world of food, fiber, and natural resources firsthand.

You might call the camp an “agstravaganza.” There is a guest speaker most days, multiple field trips, behind-the-scenes tours of agricultural businesses, numerous demonstrations, and lots of fun with cookouts, camping, fishing, and hay rides. There are new experiences most every day and lots of opportunities to touch and see.

“We give our students a firsthand opportunity to become aware of how diverse agriculture is,” says Smock.

The ability to touch and see is especially important at this camp because the participants are deaf or hard of hearing.

The Kentucky School for the Deaf is a small fully accredited public school for kindergarten through high school students designed specifically to meet the needs of children who are hearing-impaired. Founded in 1823, it is one of the oldest schools in the nation for deaf and hard of hearing children.

Ag Camp was the brainchild of recently retired principal Rodney Buis, who asked Smock to create it. They both knew that agriculture is the largest employer in America, encompassing 17 percent of the civil work force, and that KSD students, like most of their hearing counterparts, don’t have the daily exposure to agriculture that children once did.

Animals, soil, food, and more
Ag Camp always includes a mixture of learning experiences. A few examples: Bill Spears with the Kentucky Department of Fish and Wildlife Resources shows students how to identify animals from their antlers, skulls, and footprints. Steve Carroll teaches them how to use a bow and arrow as well as a rod and reel. United States Department of Agriculture soil scientist Scott Aldredge drills a 4-foot core soil sample to reveal the properties of soil and how it relates to nutrition and plant health. Richard Sladic, manager of Southern States Cooperative Feed Mill in Winchester, explains how they buy commodities such as grain, sell it, and distribute it by train, a “great opportunity to see the movement of food,” according to Smock.

Just don’t ask Smock to tell you about the camp unless you have several hours. She will tell you about the students seeing Limousin cattle at Englewood Farms, Lancaster, and touching million-dollar Thoroughbreds at Taylor Made farms with headquarters in Nicholasville. She’ll mention grain elevators, fish hatcheries, butcher operations, and the state Future Farmers of America (FFA) state convention.

Smock’s enthusiasm is contagious, spilling over to others at organizations such as Inter-County Energy Cooperative in Danville, which is an Ag Camp sponsor. Cooperative personnel also teach the campers about electrical safety and high-voltage electricity, says Jim Jacobus, president and CEO of Inter-County Energy. Last year, Chris Carpenter of JMB Biological Services LLC, partnering with Inter-County Energy, also provided one of the campers’ favorite presentations when he brought lizards and snakes, explaining how to interact with and care for reptiles and amphibians, and how electric cooperatives work closely with biologists so as not to endanger or displace any native plants or animals while doing their work.

Igniting passions
Each young person experiences the camp a little differently. For William Cissell, a 2013 camper and junior at the Kentucky School for the Deaf, the highlight was a field trip.

“We went to Tarter Farm and Ranch Equipment,” Cissell recalls, “and they showed us how they make equipment and gates and implements from raw metal. I want to work with tools, too. Maybe with animals also, but I want to repair things.”

Despite his interest in tools, Cissell had never seen a plow break the earth or viewed the multitude of implements farmers use. For the teenager, the trip was as much fun as the optional weekend camping trip, the initial reason Cissell wanted to attend camp.

Finding a passion, having some fun, learning about agriculture, it’s all part of each day at Ag Camp, a day that doesn’t necessarily end when the official agenda is complete.

Back to Jeffrey Carter. He returned to the dorm one night after a field trip to Eastern Kentucky University’s Meadowbrook Farm. At the farm, he saw a photographer capturing the day’s events.

“It was my first time on a real farm,” Carter recalls. “I went to my computer and searched the Internet for careers in agriculture and photography. I found out there was an agricultural photographer. I got interested.”

Carter now knows that he wants to be a photographer and that when Ag Camp 2014 rolls around in June, he will be there.

Ag Camp 2014
This year’s Ag Camp will be the second and third week of June 2014. It is open to all hearing-impaired high school students in the state. To learn more, contact Sandy Smock, Ag Camp director, at (859) 936-6806 or e-mail her at sandra.smock@ksd.kyschools.us. To learn more about the Kentucky School for the Deaf, go online to www.ksd.k12.ky.us.