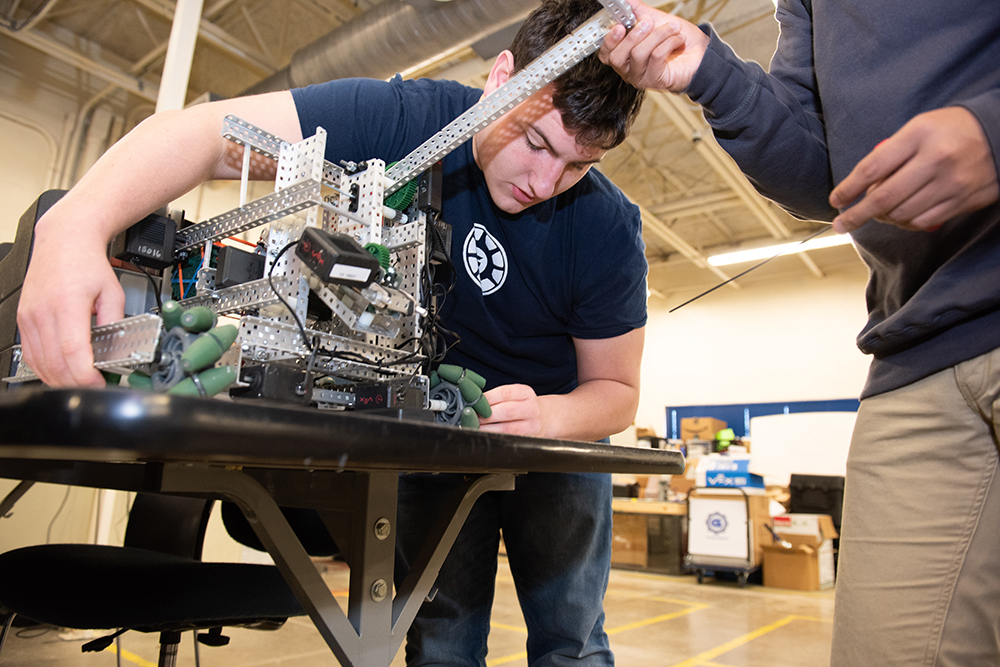 A commentator provides the play-by-play and a crowd of onlookers cheer raucously, as they might for a sports team. But in this case, it’s a VEX Robotics semifinals competition in which both teams are composed of students from Christian County Schools’ Gateway Academy to Innovation and Technology.

During the competitions, student teams design and build robots that compete in an engineering-based game, with matches held at regional, state, national and world levels. The game changes each year, and so must the design and capabilities of the robots.

Gateway Academy’s robotics teams have amassed many awards and accolades in their four-year history. With assistance from coaches Sean Conley and Patti Messamore, robotics coach Nathan Hicks has led the team since 2017.

Hicks says his first-year goal was to win a tournament and a trophy, but the academy’s teams earned 13 trophies and won two tournaments. The feeder middle school team took top honors in the VEX State Championship. Two teams qualified for the VEX World Championship in Louisville in April 2018, facing teams from the U.S., Canada, China, Singapore, European countries and more. There, a Christian County middle school team placed 16th.

“We didn’t have the success we were hoping at Worlds, but it was our first time there and it was on a stage that I don’t think any of our students have seen before or expected,” Hicks says. “Our expectation this year is we want multiple teams to go to World,” adding that there’s a strong possibility his high school teams could also win state-level competitions.

Joshua Bush is a 17-year-old senior at the academy and a member of the robotics team. He says he enjoys the challenges of designing robots most of all, “building from the wheels up.”

Bush adds, “Whenever you encounter a problem, you have to take apart the whole thing to fix it.”

“Without them, our robotics program wouldn’t be as successful as it is,” Hicks says.

Interest in the robotics team has risen from four students on one team its first year to the current 77 students on 11 teams—including three all-female teams.

A middle school team has earned an invitation to California in mid-February to participate in the South Bay VEX Robotics Tournament at Google headquarters Quad Campus.