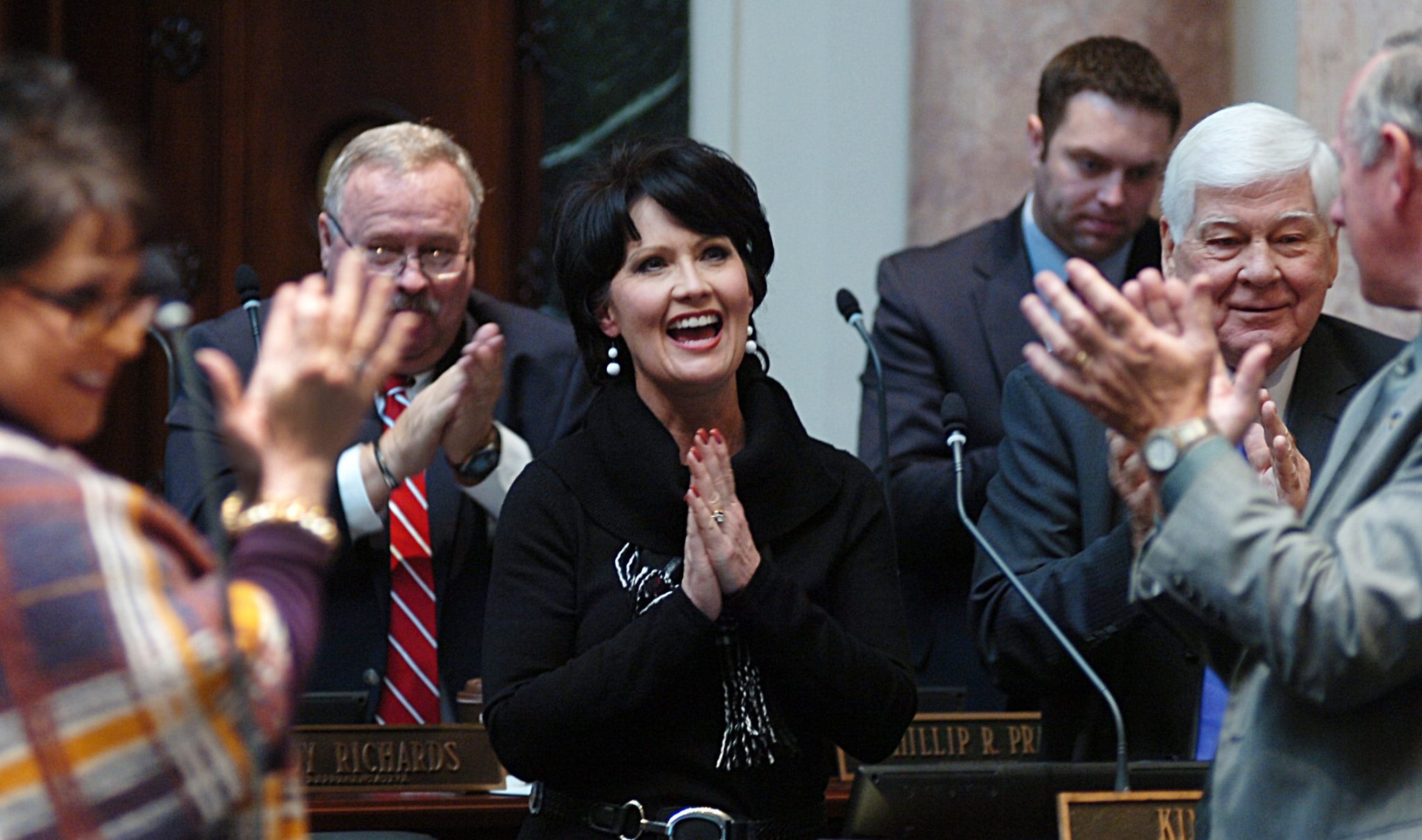 FRANKFORT, Feb. 10 -- Rep. Kim King, R-Harrodsburg, is congratulated upon the passage of HB 38 which she sponsored in the House. Photo: Legislative Research Commission

FRANKFORT—State lawmakers returned to the Capitol this week to start the second part of the General Assembly’s 2017 session. The first portion of the session, held over the course of five days in early January, featured a quick start as seven bills were passed into law.

The second part of the session is sure to feature its own history-making moments as lawmakers consider hundreds of bills–each with the potential to affect people across the state.

The moment that received the most attention in the Capitol this week came as the Senate and House met in a joint session to hear Gov. Matt Bevin’s State of the Commonwealth Address. Amid a host of subjects covered by the governor in the his second such address, his call for tax reform and additional efforts to strengthen the state’s public pension systems generated headlines across the state.

By week’s end, dozens of bills on subjects ranging from school calendars to pension transparency had taken steps forward in the legislative process. Bills that advanced this week include the following:

Senate Bill 2 is aimed at making state retirement system transactions more transparent. The legislation would hold state retirement systems accountable when contracting out services. It would also codify a reorganization of the Kentucky Retirement Systems board that was called for in an executive order issued by the governor last year. The Senate approved the bill on a 37-0 vote and sent the measure to the House for consideration.

House Bill 14 would make an attack on a first responders, such as police, fire fighters, and EMTs a hate crime. The bill was approved by the House Judiciary Committee and now awaits action in the House chamber.

Senate Bill 17 would specify in statutes that students are permitted to voluntarily express religious or political viewpoints in school assignments free from discrimination. The bill passed the Senate on a 31-3 vote and now goes to the House for consideration.

House Bill 38 would prohibit registered sex offenders from being on public playgrounds without advanced written permission of the playground owner or manager. Violators would be charged with a Class A misdemeanor, which can carry up to 12 months in jail. The bill was approved by the House Judiciary Committee and has been sent to the full House for consideration.

Senate Bill 50 would give school districts more flexibility when setting school calendars. Districts that choose to start the school year no earlier than the Monday closest to August 26 wouldn’t have to meet the state’s 170-day requirement for the school year, as long as students were still receiving 1,062 hours of instruction each year, which is considered the equivalent of 170 school days. The bill passed the Senate on a 33-1 vote and has been sent to the House.

Senate Bill 78 proposes a ban on tobacco products at public schools. The measure would prohibit use of tobacco products by students, school personnel, and visitors in schools, school vehicles, properties, and at school activities. The bill was approved by the Senate Education Committee and has been sent to the full Senate for a vote.

House Bill 147 would require students to submit proof of immunizations against measles, mumps, rubella, and other diseases before being able to enroll in Kentucky public or private colleges. The bill was approved by the House Health and Family Services Committee and now awaits action in the House chamber.

House Bill 174 is aimed at helping farmers transport their goods by extending a 10 percent weight tolerance for vehicles carrying poultry, livestock, meats, crop products, or feed for livestock and poultry on state roads other than interstate highways. The measure was approved by the House Agriculture Committee and Senate to the House chamber for consideration.

You can also write any legislator by sending a letter with the lawmaker’s name to: Capitol Annex, 702 Capitol Avenue, Frankfort, Kentucky 40601.