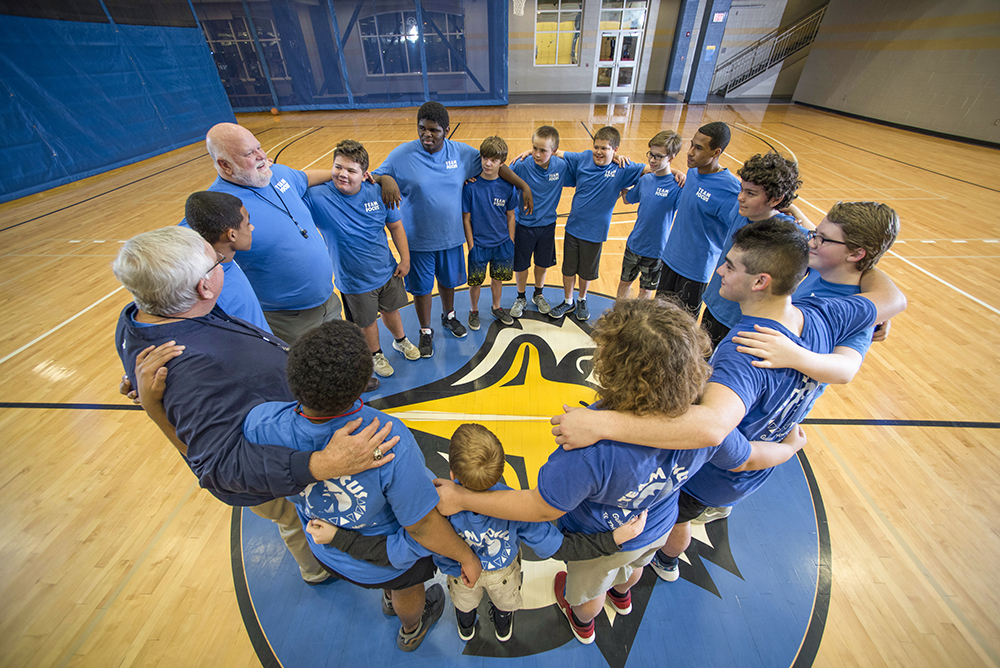 Greg Ramey, left, talks to the boys during a Team Focus huddle. After a Team Focus gathering the young men and staff get in a circle, lock arms and sing the song He Knows My Name. Photo: Tim Web

14-year-old Malachi Fulcher casts his line. He waits patiently until the line jerks, then pulls the rod and reels in the fish, the first he has ever caught.

Emmanuel Anku sprints beside him, grabs the line and extends a measuring tape from the fish’s tail fin to the mouth.

“It’s a bass, 16 1/2 inches,” Anku yells. A nearby group of 29 young men and 10 adult mentors from the Kentucky Chapter of Team Focus cheer. The young men and many of the mentors share a common bond: Their fathers were not part of their daily lives.

“I’m glad I’m here,” Fulcher says, beaming a broad smile. “I could be home playing computer games. This is something I could not miss.”

Founded in 2000 by former football player, coach and ESPN broadcaster Mike Gottfried and his wife, Mickey, Team Focus has built a national mentoring program for fatherless young men that has transformed the lives of nearly 5,000 young men in Kentucky and other states.

For 18 years, the Gottfrieds and Team Focus have been on a mission to provide fatherless young men with leadership skills, guidance and godly values. Connections with mentors begin at meetings and summer camps, and those relationships continue to provide support and teach skills—how to speak in public, put on a tie, treat women with respect, nail a job interview, set goals, balance a checkbook, be a leader and overcome life’s challenges.

Gottfried, who played at Morehead State University and coached at Kansas, Pittsburgh, Cincinnati and Murray State before joining ESPN, knows all about the heartache of losing a father. When he was just 11, his dad, Fritz Gottfried, died at 41 from a massive heart attack. After that, Gottfried often cried himself to sleep. Even so, today he passionately preaches a message of bringing good from bad.

“You are going to have bumps in the road,” he says, “but how you react to the bumps is what you control. It’s a big part of Team Focus.”

SIDEBAR: Bill Baldridge: coaching for success in football and life

Like Gottfried and many other mentors in Team Focus, former Georgetown College and Morehead State coach Bill Baldridge—who is the director of Team Focus in Kentucky—got involved because of his own childhood experiences without a father at home. Baldridge was Gottfried’s roommate when they played together at Morehead State, where they both won Ohio Valley Conference football championships.

When Baldridge was just 4, his mom separated from his dad to keep the family safe.

“We had a pot-belly stove on the farm,” Baldridge says. “He was beating up on mom. I told him to stop, and he threw the hot water on the stove up the stairs at me. It wasn’t boiling, but I had some first-degree burns. That was it for mom. We left.”

Eventually, he forgave his father, which is something Team Focus strongly encourages its young men to do.

“One of our kids went home to live with his grandmother, and his dad showed up from prison,” Baldridge says. “His mom died from drugs. I told him, ‘You’re going to feel better if you forgive.’ As a Christian you have to forgive. It’s never too late.”

LEARN MORE: For more info, including how you can help by volunteering or donating, click here.

Team Focus traces its start to the Gottfrieds’ living room in Mobile, Alabama. As Mike and Mickey discussed how to invest extra funds from the Mobile Alabama Bowl, a revelation flashed in Mickey’s mind and she blurted it aloud: “Young men without fathers.”

“I never even had that thought at all,” she explains. “It was a God thing from the heart of the Father. That’s the truth.”

They organized the first camp with 40 young men at the University of South Alabama, thinking it would be a one-time event, but the weekend went so well that the camps continued and eventually spread to other states.

Coaches and friends like Baldridge from a lifetime in sports got involved, including Nick Saban, Urban Meyer, Ray “Rock” Oliver, Rey Dempsey, Rocky Alt and University of Kentucky basketball coach John Calipari. They are determined to see the program grow to address the problem of fatherless homes across the state and nation.

“A father who is on drugs or in jail, worrying about that is a waste,” Calipari says. “You have to deal with what you can control. You can control your reactions. My mother said whatever situation you are in is not your future. We never went on vacation, and never had the shoes we needed to wear, but you have to dream beyond your surroundings.”

Each summer on the Morehead State campus, dozens of young men of all races and backgrounds gather for the Team Focus Camp, the annual highlight of the year-round program. Coaches and mentors attend, often with their wives, to model Christian marriage and to help the young men begin a new life journey.

Volunteer after volunteer speaks, demonstrating a desire to invest in their lives. For three days, the young men get new life experiences like touring the Morehead State farm, visiting the local National Guard Armory and seeing a fish hatchery. The camp is free of charge. Participants get Bible lessons, play basketball and listen to program veterans like Aaron Dais, 29, who started in Team Focus when he was 13.

Through Team Focus, Dais realized his dream to become a videographer and to travel. His work has taken him to Dubai, Cape Town, London, Jerusalem and many places he once never dreamed possible.

“All of these opportunities came because I followed the direction of the Lord,” he says. “My first vehicle was given to me by a member of Team Focus.”

At camp, the young men often read Jeremiah 29:11, a verse that is the foundation of the Team Focus program. It says, “For I know the plans I have for you, declares the Lord, plans to prosper you and not to harm you. Plans to give you hope and a future.”

“We had a boy, Tyler, who went to Afghanistan,” Gottfried says. “He called one night and said, ‘That Bible verse is so important. I had it on the top bunk above me and I looked up at it every night. That got me through Afghanistan.’”

The campers write down anything that is meaningful to them in notebooks. On the first night, they share their life stories and interests. They are encouraged to speak their dreams aloud. One boy hoped to be a golfer at the University of Kentucky. Another wanted to be a sportscaster, while others talked of becoming police officers and doctors.

“There was a pastor, Joe Garlington out of Pittsburgh, who said nothing happens in God’s kingdom until something is spoken into the atmosphere,” Gottfried says. “Out of your mouth comes the good and the bad. I emphasize speak into the atmosphere what you want to do.”

On the last night of camp, the young men wear ties and are served a big dinner. At the conclusion, young men and mentors form a big circle and then lock arms to sing He Knows My Name. By the third day of camp, many know the words by heart.

Chase Clark, 17, lives in Georgetown and is a junior at Scott County High School. He says Team Focus has been life changing.

“If it wasn’t for Team Focus, I wouldn’t be where I am,” Clark says. “I’d probably be making bad decisions. I’ve learned to be a leader, not a follower, and how to say no to peer pressure.”

Clark is a member of the Scott County High Bass Fishing Team. He hopes someday to be a lineman and has been in Team Focus six years.

Collin Purvis, 10, lives in Olympia and is in the 5th grade at Owingsville Elementary in Bath County. He and his family are members of Fleming-Mason Energy. He hopes someday to be a professional gamer and joined Team Focus this year.

“Everyone there loves me and is my friend,” he says. “I’ve learned a lot about the Bible. That’s the reason I am religious, because of the camp.”

Team Focus struck a chord with Coach Calipari and his wife, Ellen, from the first time Gottfried asked for financial support from the Calipari Foundation. The two have been lifelong friends since their coaching days at Kansas and Pittsburgh.

“He’s a giver,” Calipari says. “People want to follow those people. He gave me great advice on how to coach these young men this year. It was right on point. He gives me ideas. If you want to be followed, you have to be a leader that serves. If it’s about me, who wants to follow that guy?”

“He and Ellen were in from the start,” Gottfried says. “I told him what Urban Meyer and others were doing, and he said, ‘Count me in.’”

If the funds become available—donations accepted, visit www.teamfocususa.org for more details—Team Focus would like to host satellite camps in western Kentucky and elsewhere in eastern Kentucky. Although he’s from Crestline, Ohio, Gottfried has family ties in Kentucky. His cousin, Jack Harbaugh, coached at Western Kentucky University.

“All of us followed him,” Gottfried says. “We all wanted to coach. One man had that effect on us.”

These days, Gottfried is answering a different call. And when his young men from Team Focus ring, he always tries to give them attention and affirmation. Once, he literally took a call from a Team Focus youth when he was visiting the White House.

“I try to always take the call and call them back,” he says. “That was great when I had one or two camps. Now, it’s so many.”

One year before a camp in Mobile, a mother stood by and wanted to talk to Gottfried privately, asking for repeated assurances he would look after her son.

A few months later, the mom died from an illness that Gottfried knew nothing about. He then realized she wanted him to watch over her son after her death. Eventually, the young man attended University of Alabama at Birmingham, graduating with honors.

“I called him and left a message,” Gottfried says. “I was just thinking about him and said, ‘Your mom would be so proud of you.’ He called me back. I take it seriously. I want it all to be good.”