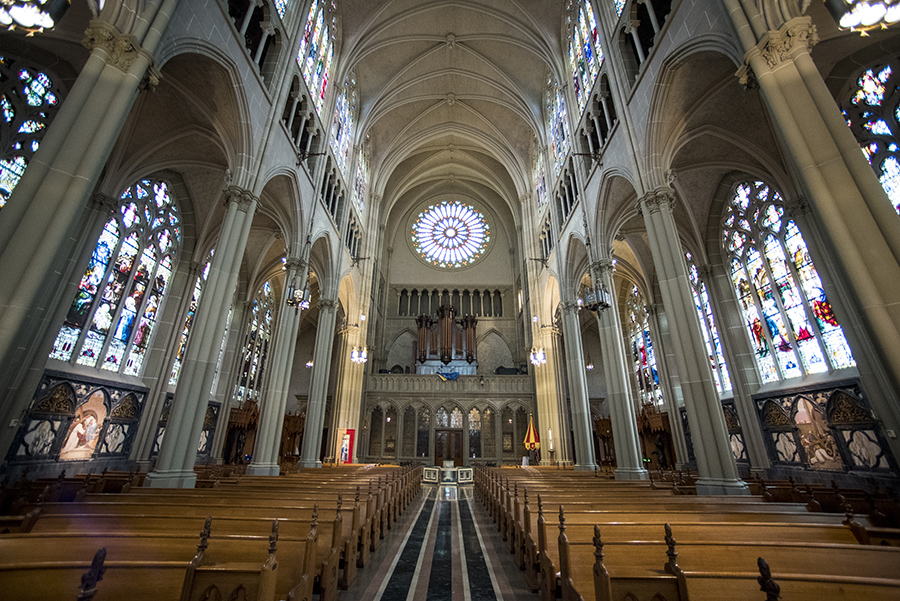 A view of the nave looking toward the west gallery. Crowning the gothic interior is the vault or ribbed ceiling 82-feet above the floor. Photo by Tim Webb

Arches. Gothic architecture. And those 82, beautiful stained-glass windows—one of which is among the largest in the world. Cathedral Basilica of the Assumption is a hidden treasure in plain sight in northern Kentucky.

“The Cathedral Basilica of the Assumption is the mother Church of the Diocese of Covington and a spiritual home to parishioners and guests alike,” says Very Reverend Ryan L. Maher, V.G., Rector at the Cathedral. “We welcome any and all visitors to our magnificent Cathedral Basilica which stands as a beacon of hope and a clear reminder of the majesty, goodness and presence of the Lord.”

Building the Cathedral was the dream of the Most Reverend Camillus Paul Maes, the third Bishop of the Diocese of Covington. The project began in 1894, but still today is considered unfinished. Bishop Maes engaged Detroit architect Leon Coquard to design the church.

The Cathedral’s stained-glass windows are the creation of Mayer and Company of Munich, Germany. They were made in Germany and delivered and installed between 1908 and 1919—a European moratorium on German exports halted deliveries during World War I.

After a fundraising campaign in 2000, the Cathedral underwent a renovation, which included cleaning and repairing the stained-glass windows.

Thanks to Stephen Enzweiler for providing photo caption information about the Cathedral’s gorgeous stained-glass windows.