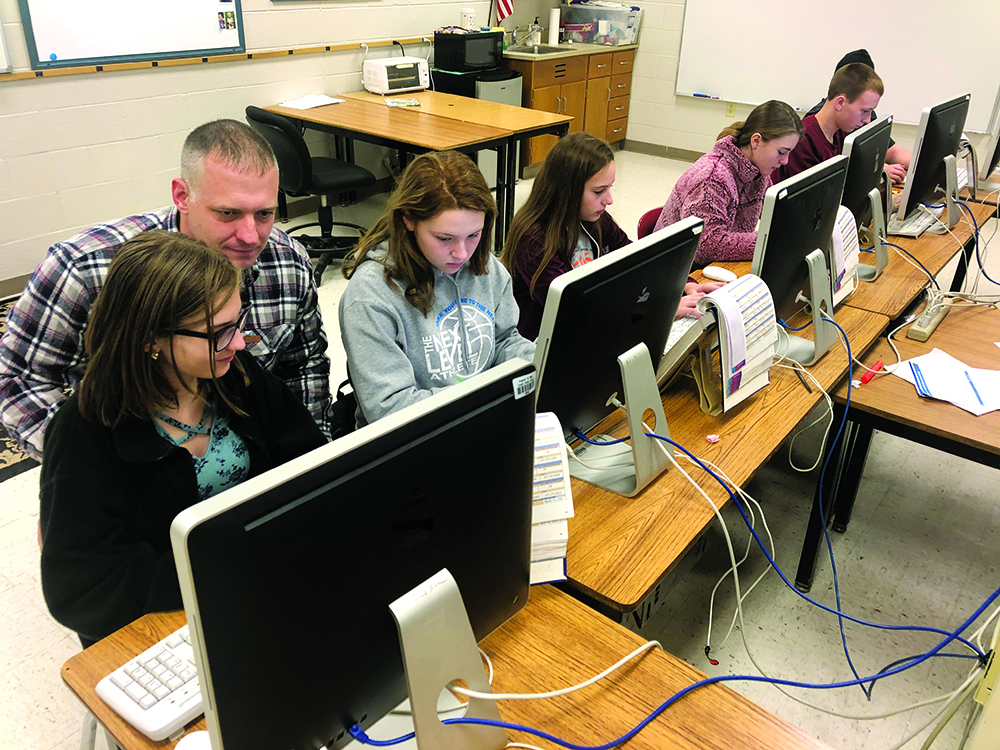 Looking back on his middle and high school education at Menifee County Schools, William Roach-Barrette feels certain he wouldn’t have ended up on his current career track—working on wireless technology at Rajant Corporation in Morehead, with a 2017 degree in space systems engineering from Morehead State University—if it had not been for the influence of Dataseam in his eastern Kentucky school system.

“Dataseam came and installed Macintosh computers in every classroom in the high school my freshman year, and that introduction to the Mac operating system was really my first exposure to the world of technology at that level,” says Roach-Barrette, a Clark Energy consumer-member from Wellington. He ultimately received a scholarship from Dataseam to help offset the cost of his studies at MSU.

Further, the Dataseam-funded Sci-Fi project—“where high school students compete with one another to create a film around space science topics”—was a key inspiration in Roach-Barrette’s decision to pursue a degree in space systems engineering, he says.

Roach-Barrette’s success story is just one among many.

Since its founding in 2003, Dataseam has worked to provide tens of thousands of Apple iMac workstations at schools in more than 30 participating counties, many of them coal-producing areas in eastern and western Kentucky.

It originally was funded through a state economic development grant supported by coal severance tax revenue that focuses on developing coal-based economies. Dataseam now is funded by the Kentucky General Assembly, widening its ability to expand its partnerships in other areas of the state.

Currently, Dataseam’s computer grid contains roughly 9,400 Mac machines, all of which are exposing Kentucky K-12 students to updated, high-end computing capacity that their school systems might not otherwise be able to afford. At its high point, the Dataseam grid has included as many as 24,000 Mac computers.

But the Dataseam computing grid’s real power is its ability to do double duty: Behind the scenes, the computers run high-powered computational simulations for research teams at the University of Louisville’s James Graham Brown Cancer Center, helping to advance their search for cancer-fighting proteins.

“We’re doing drug discovery in order to try to find new treatments for cancer,” explains Dr. John Trent, the center’s deputy director of basic and translational research. “There are many ways you can do this, but this (computational simulation approach) is one of the faster and more cost-effective ways.”

By using the vast processing power of the combined Dataseam computer grid, Trent and his team are able to drastically expand the speed and scope of their hunt for proteins that may be potential cancer fighters. In essence, the computers are able to simulate the projected interactions of proteins and cancer cells virtually—allowing researchers to identify which proteins may merit physical, lab-based testing as new drugs in the future.

“To do this properly, you need to screen millions of compounds against millions of potential drugs or structures,” Trent says. “When we started doing this over a decade ago, it would take us months to (screen) 100,000 compounds in the laboratory. Now, speed up to 2016—when Dataseam had 24,000 processers and we were using them continuously—and we were able to screen 25 million compounds in three or four days.”

“It definitely felt empowering to know that even when we weren’t using the computers, they were working to potentially identify medicines that could save lives down the road,” says second-year UofL medical student Paige Hart of Caldwell County, the state’s first Dataseam partner county.

Since 2005, Both UofL and Morehead State University have offered Dataseam Scholars programs, which provide four-year scholarships in STEM (science, technology, engineering and math)-based subjects for students from participating Dataseam counties.

Spurred by the STEM exposure Dataseam provided, Hart received a Dataseam scholarship to pursue her 2017 undergraduate degree at UofL. She hopes one day to pay it forward by returning to western Kentucky to practice medicine.

“With our model, instead of building a supercomputer over here and giving kids computers over there, you end up doing both things with the same dollar,” explains Dataseam CEO Brian Gupton, a Caldwell County native who now lives in Louisville, where the company is headquartered. “Our Dataseam grid acts as a virtual supercomputer that allows Brown Cancer Center to do billions of calculations every day. It’s allowing them to pursue research that they couldn’t before, because they simply didn’t have the infrastructure to do it.”

Significantly, Dataseam’s partner regions have some of the highest rates of cancer incidence in the United States, further underscoring the importance of the research being done.

Gupton points out that Dataseam “isn’t just a computer giveaway.” Partner school systems receive not just free computers but also comprehensive, ongoing teacher training and professional development to ensure that staff are able to skillfully integrate the Macs into their lesson plans.

“We were able to get really good professional development thanks to Dataseam,” says Harlan Independent Schools Superintendent Charles Morton. “If you keep your computers up and going and show an interest in training, then they give you more and more opportunities to earn additional Mac workstations, and our district has really taken full advantage of that.”

At schools across the state, the power of Dataseam’s partnership is being felt daily.

“We are a small district, with just a little over 1,000 students and a small tax base. There is no way that we would be able to give our students the technology they need to compete with the rest of the state, much less the rest of the nation, without Dataseam,” says Grayson RECC consumer-member Michael Wagner, chief information officer for Elliott County Schools.

“We’d be lost without Dataseam. They have provided so much opportunity for our students to have access to the latest technology and media tools,” agrees Kenergy consumer-member Tori Schneider, library media specialist at Hancock County Middle School.

Before the county’s partnership with Dataseam, keeping technology up-to-date had been a challenge. “Our computers would tend to get outdated fairly quickly, and it was a slow process getting them updated,” says Hancock County High School Media Specialist Laura Szefi. “Up to 70 percent of our time in the computer lab was lost just trying to get access to information, due to aging computers and long lag times. Now, with Dataseam, our technology stays updated, and we’re not wasting curriculum time.”

Further, receiving computers from Dataseam enables districts to leverage their tech funding for other needed items. “We can take the money that we would normally have spent on computers and purchase other things like interactive boards,” says Greg Payne, Hancock County Schools’ chief information officer.

It’s a partnership that’s garnering positive returns both in the short term and potentially for generations to come.

“We live in a geographic area in Harlan County that is, unfortunately, at the epicenter for many of these types of cancers,” says Morton. “And so, when our staff and students sit down in front of that really nice, shiny iMac, they are aware each day that there is really important work being done in the background—work that could one day improve the health and quality of life for members of their own families.”