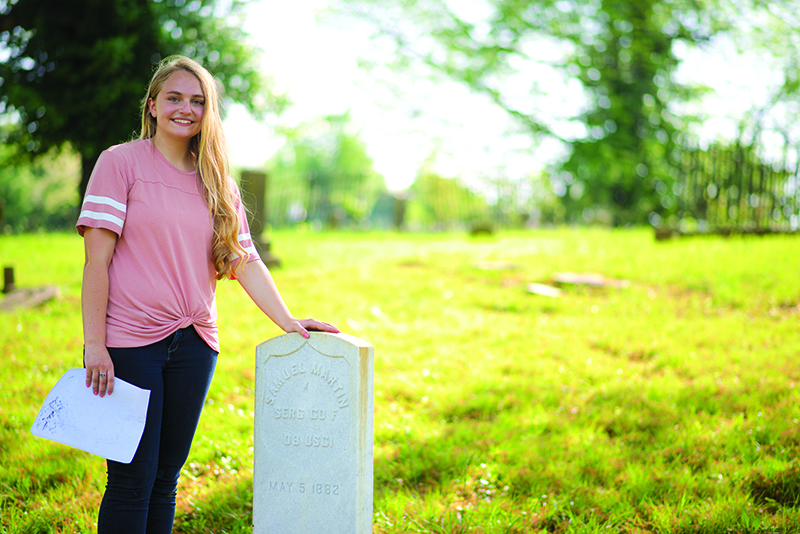 Kassidy Cobb stands at the grave marker she secured for Samuel Martin, one of eight United States Colored Troops to receive new grave markers, thanks to her efforts. Photo: Joe Imel

The past and the future meet in teenager Kassidy Cobb

One evening around the dinner table, Kassidy Cobb, then in the eighth grade, had a question for her parents: Did any of her ancestors fight in the American Civil War?

Her quest to answer that question led her to spearhead efforts to replace Civil War veterans’ crumbling grave markers, organize community-wide events to honor those from Muhlenberg County who fought in that war, and help a historian research a book on them.

Now a 17-year-old senior bound for Madisonville Community College this fall, Cobb—whose family is a consumer-member of Pennyrile Electric—also found her future career along the way.

“I want to be a voice for people who lost their voice,” she says. “Some people think history is not important anymore, but just like me, these people laughed and cried and had desires for the future.”

Vicki Yonts, who knows Kassidy through the Greater Muhlenberg Chamber of Commerce’s Youth Leadership Program, cites the teen’s love for history, but also describes her as having “a passion for a better tomorrow.”

Cobb, who is homeschooled, has volunteered with a Bowling Green organization that helps inner-city youth; helped paint picnic tables and plant flowers at Lake Malone State Park; and handed out water bottles to visitors during the August 2017 total solar eclipse.

“Her willingness to get involved is an understatement,” says Yonts, program manager for a local foundation. “She will do whatever it takes to make a difference.”

Cobb was named the 2017 Youth Citizen of the Year by the Greater Muhlenberg Chamber of Commerce and was honored for her efforts on behalf of Civil War veterans by the 2018 Kentucky General Assembly. It is her focus on history that “makes her unique and interesting,” Yonts says.

Cobb’s search for the grave markers of her Civil War relatives propelled her into a project to ensure other veterans of that war were not forgotten.

The first marker she found was that of her fourth great-grandfather, Darius Hill Skipworth, a Union sergeant who fought at the 1862 Battle of Shiloh with Company B of the 11th Kentucky Infantry. “It was very hard to read,” she says. “It was made of sandstone and over 150 years old.” She found the same situation at grave after grave.

“The stones were in such disrepair,” Cobb says. “One was lying on the ground, and the others were illegible. One was in a cow field overrun with weeds, ticks and snakes. The only marker had been a pine tree. Now all that remained was a stump.”

She learned that the U.S. Department of Veterans Affairs has a process to provide a new grave marker for a veteran if the old one is in disrepair.

“I didn’t know how long the process would take,” she recalls, “but I decided to fill out an application and see what happened. It took me about two to three months.”

“When I got acceptance, I jumped up and down,” she says. “It was one of the most exciting things ever to happen to me.”

Cobb kept applying for new markers for each of her relatives, one by one.

But she didn’t stop at family. She applied for new markers for many of the Civil War veterans from Muhlenberg County, related or not. For example, she worked to get markers for the graves for seven United States Colored Troops (USCT) soldiers buried at the Old Greenville Cemetery.

Success again. Only two of her applications were rejected, both because the current stones were not in bad enough condition.

“The more you do it, the better you get at it,” she says of the application process. “Now I can complete an application in a few weeks.”

Bringing the past into the future

“These guys need an event,” Cobb decided. So, in typical Kassidy Cobb style, she planned one.

In August 2017, she hosted a ceremony to honor Darius Skipworth and his son Henry C. Skipworth.

On April 28, 2018, she spearheaded a second ceremony, this one for USCT soldiers Henry Chatham, James Harrison, Morris Jernigan, Samuel Martin, Thornton Rumsey, Henry Short and Perry Weir. About 90 people attended and so did the television crews.

Not only were the new stones unveiled, but Cobb lined up speakers for the ceremony, including Civil War re-enactors, local historians, and local and state officials. It concluded with a military gun salute.

Although it took some 30-40 hours to plan, Cobb said it was worth it.

“I feel honored and blessed to be able to do it for them,” she says. “They’re so deserving, and over 150 years later, it’s just great to be able to help them in this way. They lost their voice so long ago. They all fought and bled and died to preserve the Union.”

She has now planned and conducted three additional events, with more on the way, to honor Civil War soldiers for their descendants. The next event is June 8 at the Todd County Carneal-Turner Cemetery.

“This is where my Confederate grandpa was buried,” she says.

Solomon Laster never had a grave maker; the one Cobb has acquired from the Department of Veterans Affairs will be his first. During the event, she will read a biography of him she wrote, and Civil War re-enactors will be there as well.

Doing your own research

In October 2017, Cobb organized and conducted Muhlenberg County’s first-ever historic cemetery tour. She contacted re-enactors to portray the individuals buried in the featured cemetery, researched them, located costumes and then wrote a biography for each. “I also portrayed a deceased Muhlenberg countian,” she says.

About 200 folks turned out for the two-night tour, which has now become an annual event.

“The event is not scary in any way,” Cobb says. “It is meant to be enlightening and educational and give current Muhlenberg County residents a glimpse into the past to learn about the lives of former Muhlenberg countians.”

Cobb has been working with Barry Duvall, a Muhlenberg County author and historian, researching the biographical sketches of the county’s Civil War veterans that will be included in his next book. Together, they have researched the backgrounds of approximately 1,000 veterans, Duvall says.

“Kassidy is a phenomenal young person,” he says. “She does great work and is an excellent researcher.”

The teen has now seen 16 Civil War veterans receive new headstones at her bequest, planned four events to honor those who served in the war, and initiated the restoration of several cemeteries. Her family mows many of the cemeteries in the summer.

To help others with the process of sharing, saving and supporting history, genealogical researcher Kassidy Cobb has created two organizations.

“If their ancestor appears to be eligible for a new grave marker, I will fill out the Veterans Affairs application and handle all of the paperwork,” Cobb says. “Descendants have the option to be involved heavily during the process (with updates) or as little as they want. For individuals from areas outside of the MCHE Grave Marker Program’s jurisdiction, we can fill out the application and have the grave marker shipped to their house, or we can help them throughout the process.”

Friends of Muhlenberg County Cemeteries: This organization helps save cemeteries throughout the county.

“Currently, the Muhlenberg County Job Corps cleared out the Hayden Cemetery and agreed to mow McDougall Cemetery once. I am also working with local officials to help ensure that these cemeteries are not lost for forever,” Cobb says.

Want to obtain a new grave maker? Here is the link to the PDF application form to apply for a free Veterans Affairs grave marker: (https://www.va.gov/vaforms/va/pdf/VA40-1330.pdf).

Kassidy Cobb, whose efforts are profiled in the main story, also has several tips.

“Get all the information together and have a photo of the old marker ready to send with your packet. Print out all the documents you can find. A pension document is the easiest to find. Wait. If the answer is no, appeal. It is not as hard as sounds.”