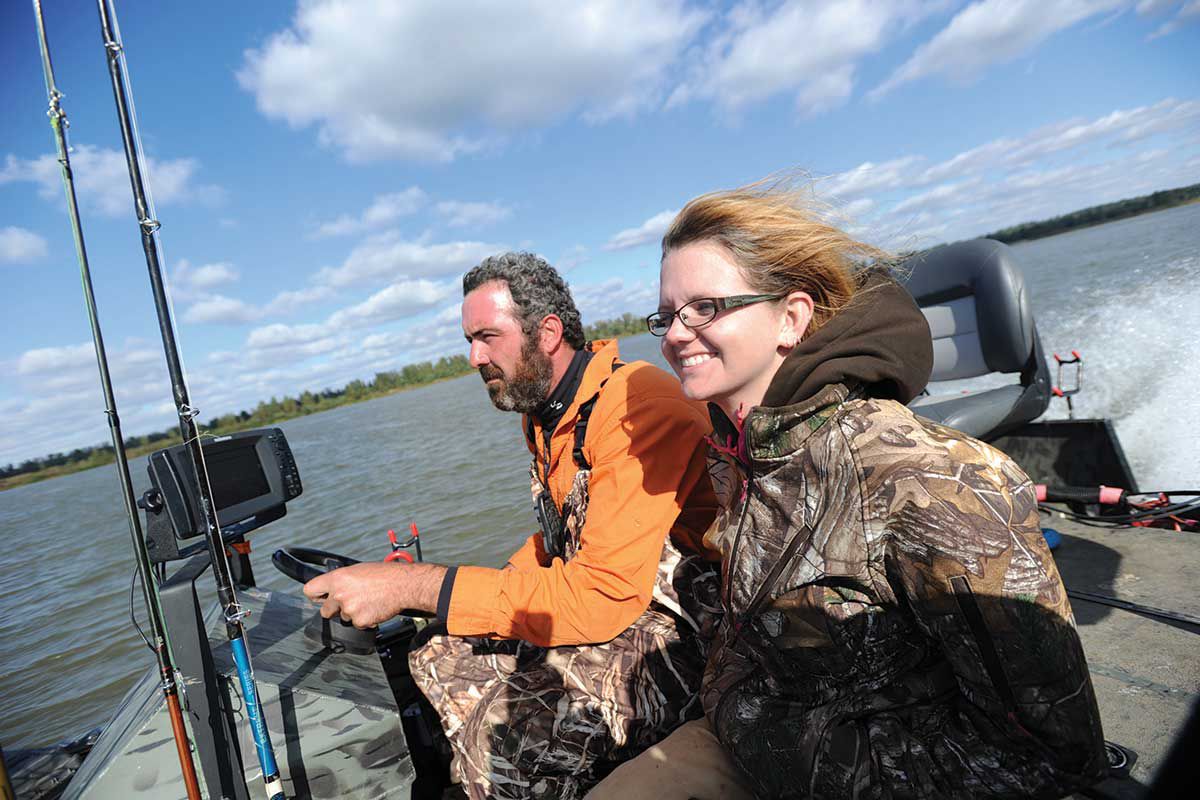 The team of Joe Ben Hogancamp and wife Brooke, Bardwell, head out to the confluence of the Ohio and Mississsippi rivers where they will fish for catfish as part of the CarlisleFest Cat Quest catch-and-release tournament. Photo: Joe Imel

The thrill of what you might catch—and bragging rights—lures anglers to tournament fishing.

With those words, some 50 boats, one at a time, head out from the Grove Marina on Laurel River Lake, which snakes through Laurel and Whitley counties. The annual Knox County UNITE Buddy Bass Fishing Tournament is now officially under way.

It is just past dawn. Minutes ago the 5,600-acre lake was just like the tourism brochure boasts: “quiet coves and cliff-lined shores” that offer “relaxation and quiet reflection,” a favorite destination for black bass, rainbow trout, walleye, crappie, bluegill, and catfish.

But this is no day for trolling around the lake for fun. This is tournament fishing. Serious angling. Live competition.

“Boat 2,” the announcer yells and another boat tears through the water just seconds after the first left dock. Boat 3, Boat 4…It’s a race to the best spots, and these fishermen have been waiting for several hours just to get a good place in line.

Each is intent on catching the biggest bass in a contest where ounces make winners. And it’s not just the prize money, of course. It’s also the bragging rights that go with first place.

The boats are now spread across the lake, and the adrenaline has kicked in.

Without notice, it happens. A tug on the rod signals a fish has taken the bait. The fight is on with the fish thrashing through the water, swimming this way and that, breaking the surface for a second and then disappearing again. The rod bends to keep from breaking.

This fight and the competitiveness—between man and fish/between anglers—is what draws Johnny Cornett Jr., a member of South Kentucky RECC, to tournament fishing.

“It is so exciting when you hook a big one,” Cornett says. “It can break the line. It can jump up and throw out the bait. You don’t know if you have a 6-inch fish or 6-pound fish on the line. The fish is giving you all it’s got. You are pulling and reeling, hoping it doesn’t come off the line or break the line. It is a pretty intense couple of minutes.”

Cornett has been in many of these fights. He has been fishing Laurel River Lake for 25 years. His father brought him here when he was barely 5. He fished in his first tournament at the age of 14. From the first day, he was hooked on the thrill of tournament fishing although he didn’t hook any fish the first time.

Now he often joins with his brother, David Cornett, also a member of South Kentucky RECC, to fish in the tournament held every Friday night on this lake. Johnny Jr. also fishes in other tournaments on other lakes. His favorite tournaments are local ones designed to benefit others such as this annual tournament to help children through drug prevention.

Known to his family as “Biggin,” Johnny Jr. fishes in about 30 to 40 tournaments a year. Bass are his fish of choice because they are tough fighters. He also enjoys the Kentucky trail series where there is a “fish off” at a different lake.

[pullquote cite=”Joe Ben Hogancamp” type=”left”]“There is so much going on in life and so much technology. You can go out there and get away from all of that.”[/pullquote]Across the state in far western Kentucky, Joe Ben Hogancamp, a member of Hickman-Fulton Counties RECC based in Hickman, is a catfish man. He started fishing before he was out of diapers and is now teaching his two daughters, Macee, age 5, and Lyndee, 3, to fish. Wife, Brooke, is also an angler.

“My dad carried me in a backpack when I was a baby,” Hogancamp recalls. “When you see me now at 6’8″ and 300 pounds that is especially funny.”

A catfish even provided one of his best memories in life.

“My wife and I were in Carlisle for our wedding anniversary,” he says. “We were fishing in the CarlisleFest Cat Quest Fishing Tournament. We were in the river where the Ohio meets the Mississippi. I looked over at Brooke, and she looked like she was praying her rod was bent over so far. She had a big fish, and we both knew it. She fought with it for 15 minutes. It took both of us to get it in the boat. She managed to get it reeled up to the top of the water, and I reached under and got him in the net. It was a relief when we got it in the boat. That catfish weighed 50 pounds.”

Whether with his wife or a bunch of buddies, Hogancamp says he loves the process of fishing.

“I like the pace of fishing,” Hogancamp says. “There is so much going on in life and so much technology. You can go out there and get away from all of that. It’s just so much fun.

“I like to be around all the old guys. They teach you techniques, how to tie hooks, where to fish and when to fish. I learn something new every time I go out.”

A slightly different version of that camaraderie also draws him to tournament fishing.

Hogancamp and fellow angler Cornett both say it’s not about the prize money.

“You don’t fish in tournaments to get rich,” Cornett says. “Not at our level. The odds are against you. In the little tournaments, you spend more in gas and bait than you win. It’s about bragging rights, about giving your buddies a hard time when you do better than them.”

“It is exciting if nothing else,” Hogancamp says. “It’s the thrill of what you might catch. You just never know.”

“I can’t believe how much high school fishing has grown in three years,” says Schrock, a math teacher and fishing coach at Trigg County High. “It has really caught on.”

In fact, last year, the Kentucky High School Athletic Association adopted bass fishing as an official sanctioned sport. There are now four regions in the state. Each school competes in a regional tournament in April, and the top 14 regional teams compete in May’s state tournament.

Trigg County’s Mason Shelton and Drake Oliver took first in the 2015 Calloway County Froggyland Classic fishing tournament. Photo: Laura Shelton[/caption]One of the students to fish in the 2013 state tournament was Mason Shelton, a student at Trigg County High School who fished in his first tournament eight years ago at the age of 9.

“Fishing is a thing my dad and I do together, a way for us to have fun together,” says Shelton. “My dad has showed me a lot. By being on the fishing team, I have been able to show other fishermen my age what I have learned. It is fun to share my passion with guys my own age.”

Shelton is typical in terms of the passion he shows for the sport, according to Coach Schrock.

Shelton is one of two student anglers selected for the Bassmaster All-State Bass Fishing Team from Kentucky based on school and community accomplishments as well as fishing tournament success.

Schrock says the high schoolers get a lot from the experience.

“The kids are learning a lifetime activity,” he says. “They develop a work ethic because they are out there for eight hours. Students are learning preparation and organizational skills by preparing tackle and keeping it organized. They learn about nature and conservation efforts such as keeping fish alive and healthy throughout the day. Most importantly, they learn about the mental part of fishing and staying focused for an extended period of time. Fishing is the same as other sports in terms of competing against other schools, but you are competing against a fish. There are a lot of variables that cause the fish to move or to change what they are biting. The kids have to be able to stay focused to succeed on the water. That ability carries straight into the classroom.”

Schrock says the clubs have also opened up the sport to a lot of young people whose parents don’t have to own a boat. The coaches and volunteers provide the boats as well as fuel and maintenance.

It also provides lifetime memories, according to Shelton.

“My most memorable day fishing was at the state fishing tournament last year,” Shelton recalls. “We were runner-up in the state. We led after day one. Coming out on top the first day is an experience I won’t forget. The second day we were a pound short, but that’s just fishing.”