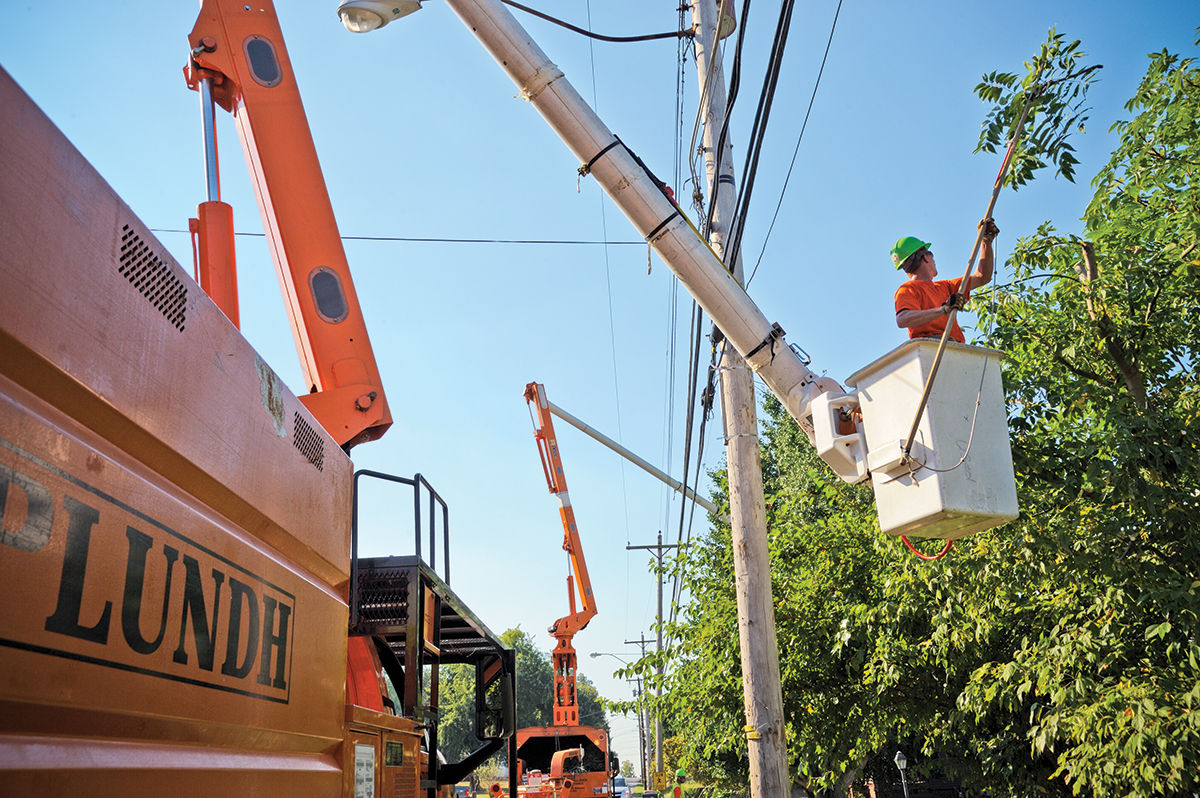 Year-round, electric utilities must work to keep dead and dying trees away from power lines to keep service reliable. But a proposed new rule to protect bats’ summer roosting sites may interfere with current vegetation management practices. Utilities are concerned about how this could affect reliable electric service. Photo: David Modica
The struggle to save a tiny flying mammal may affect reliable electric service throughout the eastern United States

You’ve probably heard about white-nose syndrome if you’ve taken a tour of any Kentucky caves recently. This fungus has already killed millions of bats throughout the United States. Perhaps you know that the two self-guided caves at Carter Caves State Resort Park are closed to the public to try to help these tiny mammals survive.

Bats and electricity are connected because of the way dangerous trees are cleared away from power line corridors to keep electric service steady and reliable. Two separate federal agencies with very different goals—one dedicated to reliable electric service, the other dedicated to protecting plants and animals—must figure out a way to do both without harming either.

Bats, trees, and electricity
Certain kinds of bats don’t sleep only in caves. Although white-nose syndrome is spread during the winter months when bats gather in caves to hibernate, many of the bats that survive have a very different lifestyle the rest of the year. During the summer, some kinds of bats sleep snuggled in the tiny spaces between the peeling bark and limbs of dying or dead trees. Those old trees are very important to the life cycle of these bats, providing a place for them to raise their young.

And that’s where the problem begins. A federal agency, the North American Electric Reliability Corporation (NERC), says that electric utilities must follow very particular procedures to maintain reliable electric service by keeping power line corridors clear of vegetation. NERC’s rules include details about how close and how tall shrubs and trees can be to power lines and support towers. But NERC standards don’t just include living plants. They also require electric utilities to remove dead or dying trees that could fall onto power lines and disrupt electric service.

Now new rules recently proposed by the U.S. Fish and Wildlife Service to protect the bats and all the places they live could drastically change all that. It might become illegal to cut down a tree that a bat would want to use. It’s a case of one agency saying, “Do this,” and another agency saying, “Don’t even think about doing that!” Figuring out which rule to follow would put electric utilities in a bind.

“Threatened” versus “endangered”
What’s making the situation so complicated is the difference between two words and what they represent. Under the federal Endangered Species Act, there are two ways to describe declining populations of a plant or animal. The number of individuals of an “endangered” species is already so small that it could soon completely die out throughout most or all of its natural range. A “threatened” species is one whose population is becoming dangerously low, and could be in danger of dying out within the foreseeable future. “Threatened” is one step below “endangered.”

Which term to apply to a particular kind of bat lies at the heart of today’s conflict. The population of the northern long-eared bat (Myotis septentrionalis) has fallen to such low levels due to the white-nose syndrome’s devastation that the U.S. Fish and Wildlife Service believes it should be listed under the federal Endangered Species Act. One early proposal recommended the highest level of concern, using the word “endangered.” That could make it illegal any time of the year to disturb the dying and dead trees this bat uses in the summer.

That would have a drastic impact on electric utilities’ procedures for keeping power lines clear of dangerous vegetation. Last fall, the National Rural Electric Cooperative Association warned the House Natural Resources Committee of the United States Congress about the effects listing the bat as “endangered” would have on reliable electricity in the service territories of hundreds of co-ops in dozens of states.

For now, the bat is considered “threatened,” and a special provision known as the “interim 4(d) rule” would allow utilities to continue to remove dangerous trees. But this is only a temporary measure until the U.S. Fish and Wildlife Service announces a final listing term for the bat. The potential for conflict between the goals of keeping the lights on and keeping the bats alive is so great that the time period for public comment on the new rules has been extended until July 1, with a final ruling announcement expected by the end of this year.

Researchers at Bartlett Experimental Forest in New Hampshire are monitoring behavior patterns and roosting site choices of the northern long-eared bat to better understand what these skillful night-flying hunters need. As the fungus known as white-nose syndrome spreads into more eastern states, bats are dying off in record numbers. U.S. Fish and Wildlife Service Director Dan Ashe says, “Without bats, insect populations can rise dramatically, with the potential for devastating losses for our crop farmers and foresters. Bats are a critical component of our nation’s ecology and economy, maintaining a fragile insect predator-prey balance; we lose them at our peril.”