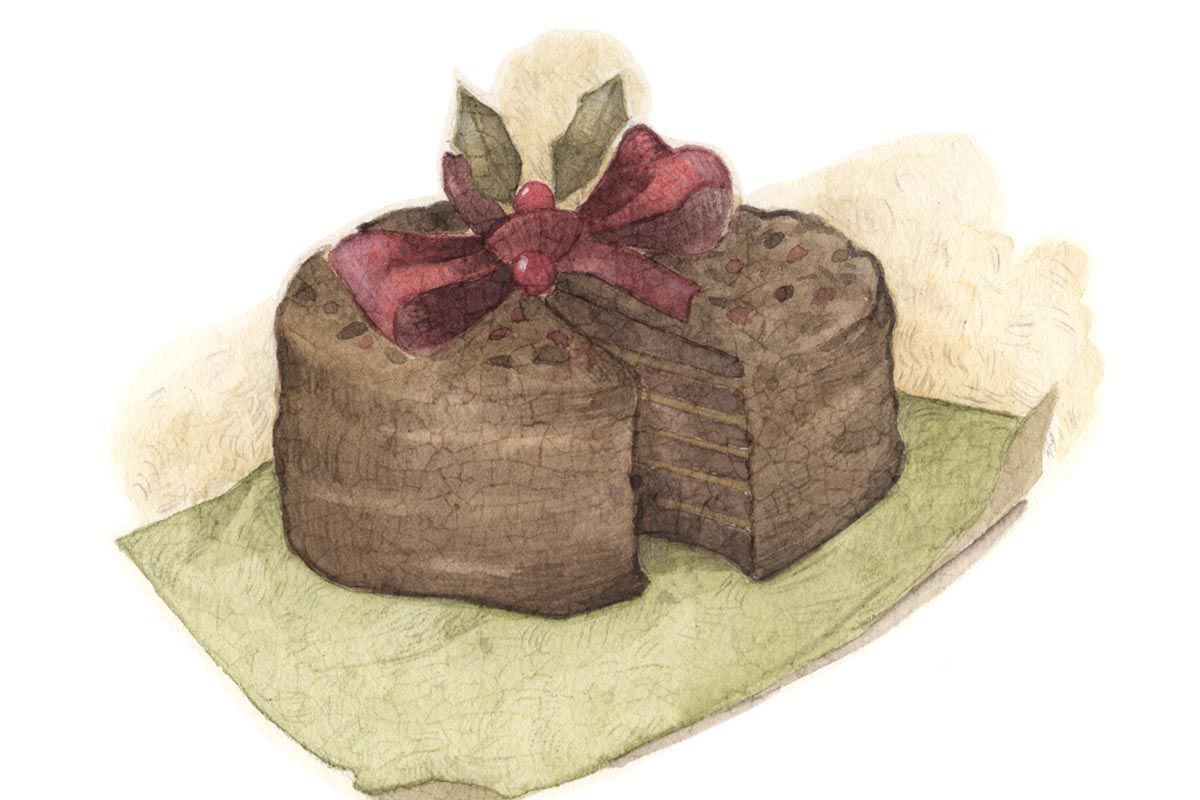 Dogs make the holiday. Whether you’re dressing them up for Halloween or giving them to that special someone on Valentine’s Day, dogs make any holiday a special one. My American boxer mutt was no exception, especially his very first Christmas in the family.

Christmas that year began as usual. I woke up ridiculously early, awakened my drowsy parents from their slumber, and made sure everyone was in the living room before presents were passed about. After goodies and wrapping paper were scattered all over the soft carpet before the massive tree, Mother headed to the kitchen, where I smelled muffins and buttermilk pie cooking away, while I gave my new dog his first Christmas gifts—three bones, a new dog bed, and a gorgeous red collar.

After breakfast, we headed off to a morning church service of singing carols and listening to the Christmas story. Though, this particular Christmas, we did not arrive home to a jolly sight.

The back door to our living room hung wide open and wet paw prints led in and out of our home. Mother called my father who had stayed at church to help clean up and began to tell him about how “we had been robbed.”

As she panicked, I followed the paw prints to the corner of the house where Mother’s skinny tree stood with all its purple decorations, or rather, where it once stood.

Upon peering out the back door, I nearly jumped out of my Christmas dress. Purple feathers, scattered across the back yard, looked to be growing out of the snow. And a trail of other assorted purple decorations formed a path leading right to my dog’s house. There he sat, happy as a lark, with three chewed stockings, a blanket, and a sideways Christmas tree.

The gift of electricity

There was a huge ice storm that winter holiday that brought down power lines all over the area, including our home service line that fell across our quarter-mile long driveway. No vehicles could come in; we could not go out.

Under the power outage protocol, priority was given to restoring power in damaged areas with multiple families, thus placing our lone house at the bottom of the hierarchy. It took days before neighbors on our road regained their power while our house was still in the cold and dark. Only our working landline phone allowed us to maintain communication and assure the outside world we were doing all right.

Meanwhile, the post-storm temperatures turned frigid, so we treated our home like an arctic camp, setting up sleeping bags together in the living room. Even our little parakeet got a “hand-warmer” instant heat pack for the bottom of his cage. Father and son chopped wood and resurrected an old wood-burning boiler, but unfortunately power was needed to circulate any hot water. Luckily warm air rises, and enough came up from the basement to keep the house, water pipes, and us from freezing.

However, it was a holiday time and although there were no sparkling lights for our young children, our living room Christmas “tree” that year became the sea of multi-colored sleeping bags with presents on top.

On Christmas Eve, we walked through the woods to be with our neighbors for a warm dinner in their warm house. Just before midnight though, everyone got quiet, as we heard the “music” of the rumbling of a “caravan” of power company trucks heading toward our driveway. It was the crew coming to fix our downed lines! Power was restored just in time for Christmas! What a glorious gift of electricity that year!

My grandfather, Pappaw Bert, was a quiet, dignified presence in my life. He was a very humble man who tried his best to hold his emotions in check, and he was my proverbial rock, the most steadfast character in my life.

One Christmas, my mother purchased gifts for him and my grandmother, and she had selected a wallet for me to wrap up for Pappaw. I balked, just being a young person not wanting to do it. Nevertheless, I gave in.

On Christmas Day, I arrived at my grandparents’ house and doled out “my” gifts. Pappaw eventually excused himself and took his gifts to his bedroom. I went looking for him and stopped outside his doorway, watching him unwrap the wallet my mother had made me give him. He looked up and saw me standing there. The late afternoon sun from the sole window highlighted tears glinting in his eyes.

With a catch in his voice, he said simply, “Thank you, Dawn.” I crossed the room, embraced him, and told him I loved him. It was the warmest moment I’d ever shared with my Pappaw, and that simple moment taught me the meaning of how it’s better to give than to receive.

Pappaw was essentially the heart of our family. He is what I miss most about holidays, and HE is my favorite holiday memory, not some material thing broken and forgotten long ago.

My most cherished memory is at some point during the hubbub of talking, eating, and laughing, I’d look around and see him standing on the fringes, hands in his pockets, not saying a word. He would merely have this look of immense pride on his face, gazing upon what he’d created—his family—seated around his table, eating his food, under his roof.

It was a bitter cold Christmas morning in Weir, Kentucky, in 1925! There, in a tiny, one-room wood cabin in Muhlenberg County was my orphaned mother, Ruby. By the age of 2, she had been separated from her siblings and placed with a great-aunt and great-uncle in their 60s. They had never had any children.

While money was always scarce, a nicely tended spring-to-fall garden helped supply food to eat and for canning. Milk for drinking and cream for churning into butter were amply provided by milking their lone cow twice each day. The well was always ready to supply good, cool water for drinking, along with other uses.

Mother’s aunt was well-skilled in all the homemaker arts: quilting, sewing, tatting, knitting, crocheting, embroidering, cooking, baking, and canning. She even had a large quilting loom attached to the ceiling, which she would lower via pulleys to use, then raise back up when she went on to other daily tasks. It was hoped that little Ruby would learn the needle arts by watching and doing, eventually.

Now 6 years old, mother was excited to see what Santa had brought. Her aunt had told her that children got switches in their stockings if they weren’t good!

Ruby scrambled out from her featherbed at dawn. The fire had already been stoked up for the day. Hanging from the mantel was the stocking her aunt had knitted for her. Little Ruby reached up and felt the outside of her stocking, quickly tossing all into the fireplace!

Aunt Mary immediately rescued the stocking from the fire, although she was in shock of what just happened. When she asked Mother why she had thrown the stocking into the fire, Mother cried and said, “Because I got switches!”

Her aunt then showed her the knitting needles in the charred stocking.

The experience didn’t dampen her spirit toward knitting, though! She was an avid knitter for almost 90 years. She didn’t quit knitting until her 94th year, and passed away at 95.

The next best thing to home

During the late 1960s, I spent most of Christmas break traveling with the Pikeville College basketball team to play in a holiday tournament at Norfolk Navy Base on the Virginia East Coast. The rest of my “vacation” was spent painting the bleachers and sprucing up the college gymnasium for the last half of our basketball season.

I always went home on the weekend before the break and my Aunt Lona (Loney) Adams, knowing that I wouldn’t be home for Christmas, never failed to let me return to campus without one of her amazing “fruitcakes” concealed under a tall, aluminum-lidded cake pan.

The cake consisted of six layers of spicy short bread about ¾ of an inch thick and 12 inches wide that had been baked in cast-iron, cornbread skillets in her old coal-fired cook stove. The layers were more akin to giant cookies than what one might think of as cake.

Between each layer, Aunt Lona spread a thin layer of “filling” made of cooked dried apples heavily seasoned with sugar, allspice, nutmeg, ginger, and cinnamon. The cake was iced with her similarly spiced, homemade applesauce and the end result was just over 6 inches tall.

I squirreled away Aunt Lona’s cake in the college food service refrigerator to soak and season until the team returned to campus the day after Christmas. Then my roommate and several other mountain boys who stayed on campus to work through the holidays usually devoured it in one evening. The smoky, spicy aroma of apples and a country kitchen somehow lessened our need to actually be with the folks we loved.

We all agreed that, even though we were not home for Christmas, “Aunt Loney’s” fruitcake was the next best thing to being there.