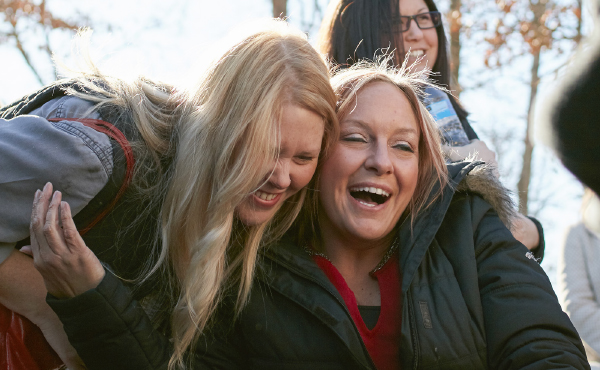 Smith, who was paralyzed, spoke with us about her new book, Lessons from a School Shooting Survivor: How to Find the Good in Others and Live a Life of Love and Peace (November 1, 2017, paperback $9.99). Her first book in 2008 book was I Choose to Be Happy. 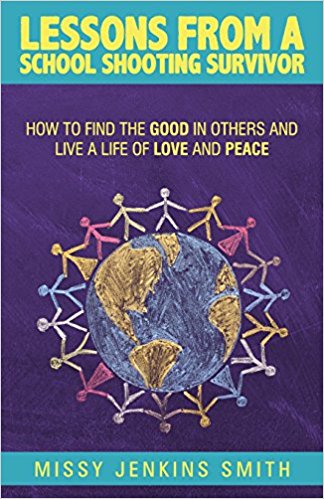 Smith says the reason for her second book “was because what I was seeing on the news just seemed like there was so much anger and hate, and with the increase of shootings, and the presidential election, the world was getting very scary to me.”

She says, “I felt like those principals that we were brought up as a child were being lost. It seemed like everybody was judging each other based on the little facts they know, or what they see when they look at someone … that they think they know what the person stands for.”

She feels we’ve lost the ability to say, “‘Hey, I want to get to know this person,’ because we’ve decided that we know them.” Smith says there’s a lot more to it than that. “We need to remind ourselves it’s important to remember that learning about each other and looking at each other as an individual is something that is important, it should not be based on things like their race or politics.”

Referring to the first chapter in her new book, Smith says, “I’ve learned that every person has a story. I’ve told my story for years. I think people should get to know someone and learn their story.” She says when we do, “we learn that there’s a reason for why a person does certain things, then there’s tolerance. There’s more to a person than what we assume we think we know. I believe that if we all respect each other’s stories and apply the principles we learned as a child, it is absolutely possible to revolutionize the world.”

Smith says she has learned this through counseling troubled kids at the Calloway County Day Treatment Center (operated by the Department of Juvenile Justice) in Murray, Kentucky, where she has worked since 2005. “I’ve (counseled) so many kids who have been through so much. I might work with a student who seems to have conflict with authority figures who are women, because their mother left them. There are things like this that we don’t understand.” She says once you can understand their story, then they can work with these individuals and help them.

Face to face, forgiven
“After the school shooting I learned a lot about the shooter (Michael Carneal) and I learned that he had been bullied. He also had some mental illness he was going through. But, it really hit me when he said he didn’t have anyone to talk to.”

When Smith spoke with Carneal face to face at the Kentucky State Reformatory in LaGrange, she says, “I wanted to get an idea of why he did what he did, so I could take something from the negative situation that he created, to make it a positive to help others.

“I asked him what he wished he would have done. He said he wished he had talked to someone and told them what he was going through. And, then maybe he would not have made the decisions that he made.”

Smith later adds, “Michael was 25 years to life, so parole is supposed to be up in 2022. He’s been there since he was 14, and he’s taking medication for his mental illness. I feel like his responsibilities should still be to continue to serve his sentence and take consequence for what he did. He killed three girls who don’t get the chance to come back. I feel like continuing his sentence for what he did is important, and so others understand the consequences involved in making this type of decision.

“I did forgive him from the beginning, but I feel that he’s where he needs to be, at the Kentucky State Reformatory in LaGrange,” says Smith.

Her position on gun laws
Smith says, “Basically, I try to steer away from some of this discussion.” She says her position is this: “As far as my opinions when it comes to guns, I have family members who use guns. My family owns guns for hunting. For me personally, I don’t want to use a gun or have anything to do with one, but I believe they must be RESPONSIBLY taken care of. My 10-year-old son and his dad go hunting, he learns the appropriate way to use a gun, and we keep our guns locked up in a safe. If guns are responsibly taken care of, I don’t have a problem with guns. But, if they are being taken care of irresponsibly, and if people are getting their hands on guns who should not have them, then that’s when there’s a problem.”

Smith believes that’s what happened in the Heath shooting. “Michael had a friend whose family owned guns, they didn’t put them away properly, and I think that he had the ability to access them and they didn’t know the guns were gone. Your own responsibility as a gun owner is huge.”

When asked about people with mental illnesses, whether they should be allowed to have guns, Smith says, “I think that as far as mental illness, some people are not capable of using guns. I do not know enough about the different types of mental illnesses. Perhaps someone who has schizophrenia, who was not taking their medication, might do something that is not okay. There are too many what if’s and possibilities, so I can’t fully answer that question.”

Healing and helping others
As a public speaker, Smith says, “I realized that it was also part of my therapy, to tell what I went through.” She says she believes a lot of kids “need that non-biased adult who’s going to listen to them, or give them advice, so they can handle some of the things that they go through. That’s what I felt I could do (at the Day Treatment Center). The kids feel comfortable with me as a counselor, that they can talk to me, I won’t judge them, and it’s in a confidential setting.”

Smith says she has met a lot of people from a variety of shootings. “I’ve met people from Columbine, from Virginia Tech … and from Senator Giffords’ shooting I met a mother and a daughter. I’m also part of a group called the Rebels Project, a private online invitation-only group, started by a couple of girls from Columbine. They started this group for support for people who have been victims, or those who were there or were affected in some way by a shooting. There’s recently been a lot of people from the Las Vegas shooting that have been introduced into the group. It’s a big support group that helps everybody be able to voice how they feel and to get through it, and have someone to talk to.”

She says, “It’s pretty crazy how when you meet somebody, even though you came from different times, different situations, how there are a lot of similarities that you are able to identify with each other.”

Telling her story to her children
Smith and her husband have two young boys. When asked if they know her story, she replies, “They do. My 10-year-old actually asked me, when he was 3 years old, why I was in a wheelchair,” she says. “That was, to me, oh my gosh, I can’t believe he’s asking me that. I always knew God would give me the words to explain it to him.”

During last year’s fall break, she says both of her kids heard her speak at Eastern Kentucky University. “They heard every word of my speech. They know everything, and I think it’s because they feel comfortable asking me questions.”

Smith says depending upon the age group she is speaking to, she does not always give all the horrible details. “But, when it comes to high school kids, I don’t sugar coat it, because they need to know what happened.”

What has kept her positive
“The support. In the beginning, I received so many letters from people all over the world giving me encouragement, and that helped push me. It helped me realize there were people right there saying, ‘I know you can do it, I’m praying for you,’” She says after that, the people of Paducah made sure that everything that she ever needed was there for her.

“Now that I’m older and with the work that I’m doing, I think it has continued with kids coming up to me and telling me their story and what they’ve been through, and what I had to say helped them.” This is what keeps her going.

“Also, the thought of the three girls and how that day I could have been gone, just like they were. I feel like that second chance at life that I was given, was something that even if I’m in a wheelchair, I need to embrace and say, ‘I can do this,’ They didn’t get the chance that I have. I have to keep reminding myself of the positives of the things that I have in my life, that some don’t.”

Smith admits, “Sometimes it’s not always easy, but it’s what I do to help get through this.”

And, then there’s her twin sister, Mandy, who was also at Heath on the day of the shooting. When asked more about their relationship, she laughs and says, “She lives across the street from me. So, yes, she is still very close to me.”

Most important to Smith, she wants to make sure that others know how much she appreciates them, from the beginning and even now.

“I have received so much continued support through my public speaking and through what I’m trying to do with the purpose that I feel I’ve been given. The kind words are what keeps me going. I want to thank other people for the kind words and support, because that’s what reminds me every day that I’m doing the right thing, and that God is using me for a visual for something—I never knew when I was younger that it would be something big.”

She says she was shy and wouldn’t get up in front of people and speak. “Now I’m able to speak in front of anyone about my story. Hopefully, the words that I have from the experience and what I’ve learned throughout the years, and from what has happened in the shooting and what I went through, will help other people.”

Smith speaks publicly approximately two times a month at schools and conferences. “I talk about bullying and trying to empower kids to refuse to be a bystander, to refuse to be a bully. If they are a victim, (they need) to make sure they let someone know what they are going through, and to also report violence whenever they see something. They are not being a tattle-tail, they are saving lives. I want people to know the importance of being proactive and that it can happen anywhere.”