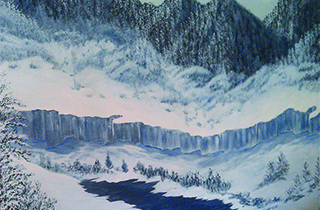 Kentuckians are not only a creative lot, they are risk-takers, too, unleashing their inner artists on wall-size canvases in their homes. Here are more murals that show off the eye-catching results of their efforts.

Mountains majesty
Nancy Thornsberry painted a full-wall mural of a snowy mountain-scape in the living room of her London home. Although not a professional artist, Thornsberry has always drawn and painted for herself and for making gifts.

“I painted this wall in acrylics and chose the scene because I have always loved snow and mountain pictures,” she says, the Smoky Mountains in her mind’s eye as she created the design.

The Thornsberrys, served by both Jackson Energy and Fleming-Mason Energy, have since moved. Their London home is currently up for sale, with the mural with its flowing streamincluded.

“I would liked to have brought that wall with me!” she says. “We had one realtor say, ‘Leave it,’ and another say the room might look larger without it, but it was hard for me to think about painting over it, so it’s still there.”

Nancy Thornsberry advises DIYers to do what makes them feel good and lifts their spirits when working on a mural and as they’re living with it. “I’ve always had a feeling of peace when I look at the mural I did.”

The Cedars history
Grady Peay and Sarah Shoulders, members of Pennyrile Electric co-op, wanted to depict their home’s history in pictures. The couple own The Cedars, a home built in 1833 by Dr. James B. Bowling, and the attendant doctor’s office nearby.

“The doctor’s office is still standing beside the original home, and the exterior of the house remains as depicted in its early 19th-century time period,” says Shoulders. “The mural flows from spring through winter. Dark figures are hiding at the Red River, which was shallow and easily crossed, to rob travelers as they traveled to and from Nashville, Tennessee. This was a rough little town.”

The mural was painted by Bowling Green artist Lori James and it has, according to Shoulders, the wow factor.

“When people see the mural, they recognize it—it’s the house!” she says. “It gives me a good feeling every time I look at it. I would not change a stroke.”

Tiger family
It’s a jungle in there, specifically, in the sunroom of the Glasgow home of a client of Louisville artist Connie Reader, a member of Shelby Energy Cooperative.

“This family had just returned from a trip that included the Rain Forest Cafe, and they all were very influenced by it,” says Reader, who counts children’s book illustrators—particularly BeatrixPotter—among her artistic influences. “Each tiger represents a family member and has their name painted on their tiger.

Reader, who has worked with interior designers to create one-of-a-kind interiors for private homes and businesses, is known to paint in bare feet.

“Amazing that is done here in Kentucky, right?” she jokes. “But if you are painting barefooted on a drop cloth and step in spilt paint, you will not tread it on a client’s carpet unknowingly.”

Reader says she has painted many murals before and after her rainforest-themed scene, but this one remains her favorite.

Plants and wildlife
Mallory DeHarte of Monticello, a member of South Kentucky RECC, also painted a jungle-themed room, this one featuring giraffes and an elephantfor her grandson’s bedroom. A former New Yorker who now resides in Kentucky, DeHarte is a self-taught artist who often finds her inspiration in nature.

“I love nature and Kentucky is teeming with plants and wildlife,” she says. “Winter reveals all the secrets of the bare-limbed trees—birds’ nests and beautiful bark. How could anyone not be inspired?”

DeHarte hails from a long line of artists and sculptors, including Grace Drayton, the artist who created the “Campbell Soup Kids,” and Walt Disney (who needs no introduction). Her passion for painting on walls began in high school where she took extra classes in art in order to graduate early—and wound up painting murals for the school.

“We took the doors down from my mother’s house after she died,” says DeHarte. “The house will be sold and I couldn’t bring myself to leave them behind.

DeHarte has painted murals on a range of “canvases,” including walls, truck tailgates, and floors.

“I guess an artist’s inspiration knows no boundaries,” she says.

Life’s path
Speaking of…Shelia Gibson of Campbellsville, a member of Taylor County RECC, had a mural she named Inspiration painted in 2010 by Trena Corbin Designs on her dining room wall.

“The waterfall, brook, trees, and flowers represent the farm I grew up on in the Sandy Y area of LaRue County,” she explains. “The mountains portray the Smoky Mountains, my ‘home away from home.’ We love it down there. It is a place where it is peaceful we can go without daily stresses of life.

“The pathway leads to the little country church, Zion Separate Baptist Church, that my husband and I attend and I have been a member of since I was 13 years old,” she adds. “The dove symbolizes the spirit of God that guides our path.”

“I was inspired by our property overlooking Lake Cumberland in Monticello,” says Jeter. “We planned to build a home on Lake Cumberland, but we’ve been so preoccupied with art fairs and teaching in Florida that we haven’t gotten that far.”

Instead, the family enjoys a view of it through Jeter’s mural, a scene that feels perfectly at home in their century-old house in Lexington. The view includes a deer that represents the wildlife cavorting across the Jeters’ Lake Cumberland acreage, along with the family cat and toy poodle.

One final tip for DIYers thinking of tackling a wall mural. Reader cautioned against spending hours on the small details.

“When painting a large wall, the small detail is lost when you step back and it may not be needed,” she says.

IMURI Project tips
Pato Paez, an American artist born in Argentina, is the founder and creative director of IMURI (www.IMURIProject.com), a creative studio based in Brooklyn, New York. Calling his studio’s work “colorful and cheeky,” Paez works in a variety of mediums and techniques to create wall murals, paintings, prints, sculptures, and more.

Here are some of Paez’s tips on how to design and paint wall murals:

1. Make sure the walls are primed before painting on them.

3. Use low VOC paints and also make sure the room is well-ventilated. Follow the safety instructions in the paint can/tube.

4. Use acrylic paint for your design. It gives you a better command over the strokes than wall paint. Also, invest in good acrylic paints. It’ll save you a lot of time because one or two coats will be enough.

5. The background paint can be simple wall paint.

6. Yellow and red colors are very difficult colors to work with, because most of them are not very opaque.

7. See 3 IMURI photos in the slideshow, which tie to the following tips:

• For flower murals, prepare paper templates that can be traced several times to create a pattern. In the image below, we prepared a couple of different sized templates.

• For stripes, use blue painter’s tape and a level to create straight lines. Allow the paint to dry thoroughly before pulling the tape off.

“My last piece of advice is this,” says Paez. “Have fun and celebrate the mistakes you’ll make.”

Read the Kentucky Living May 2014 feature that goes along with this Web exclusive, Wall Magic.