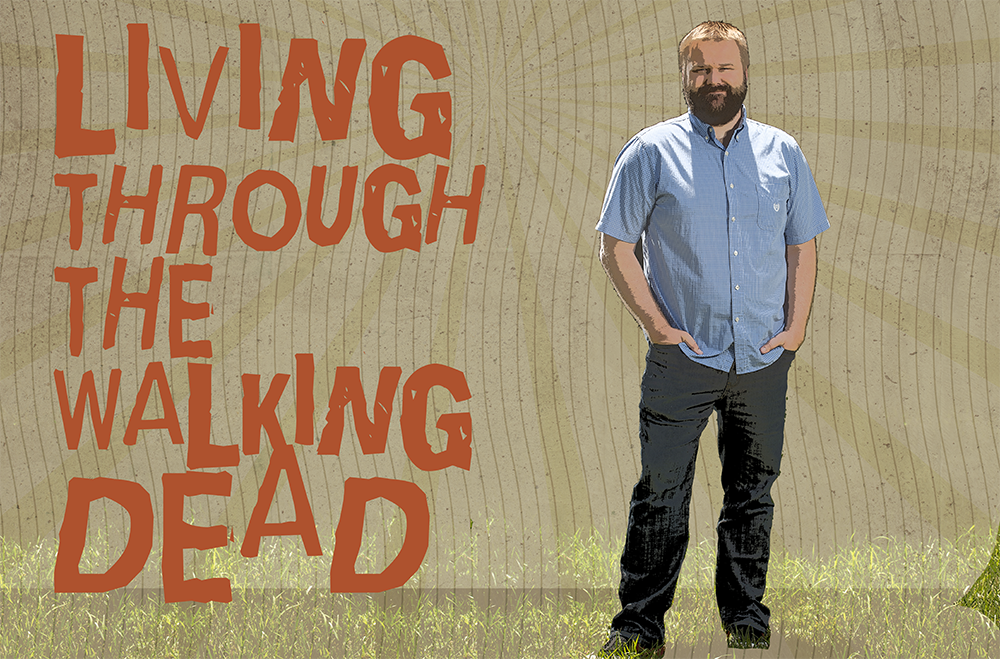 Fan emotion is on full display on this spring night at the Eastern Kentucky University Center for the Arts. That’s where 840 Dead devotees—many dressed as zombies or zombie fighters—have gathered to hear the Kentucky native offer behind-the-scenes insights into characters like Rick, Maggie, Glenn, Michonne—men and women trying to survive in a world they never imagined.

As a writer and executive producer for the show, Kirkman says, “I’m trying to think about all the things that could happen to these people and how it could change them.”

Kirkman’s own world is infinitely happier, safer, and more satisfying than that of his characters, but there is one minor parallel: the world of Hollywood TV producer is one Kirkman never imagined being part of, and while he wants to enjoy it, like the characters who’ve allowed him to enter that world, he won’t let himself get too comfortable.

Kirkman grew up in Cynthiana, where his parents owned a sheet-metal fabrication business. He helped out some, generally ignored his schoolwork, and spent much of his time reading comic books, watching movies—especially horror—and making up stories.

“He was a giant nerd. We both were,” says Tony Moore, a comic book artist who knew Kirkman growing up in Cynthiana.

“We were both engrossed in comics, and I’d never seen a collection like his. He had piles of notebooks filled with these feverishly produced superhero ideas.”

After graduating from high school in 1997, he moved to Lexington and worked a series of day jobs in warehouses and lighting companies, writing all the
while, putting together his own comics, making connections, and sneaking calls to publishers on his breaks. For years, he says, “I worked seven days a week, 16 hours a day. Creative work takes as much time as you give it.”

In the early 2000s, Kirkman was working with Image Comics, a smaller, independent alternative to DC and Marvel, when he got the idea that would change his life. Image was open to pitches for a new series, and Kirkman thought about zombie movies like Night of the Living Dead or Dawn of the Dead. He loved them, but had noticed that they tended to focus only on the early days of a zombie apocalypse. Kirkman’s question: “What would happen next?”

Kirkman asked Moore to do the art for the first few issues of his new series and set the story in Cynthiana. In The Walking Dead’s first issue in 2003, Rick Grimes wakes up in Harrison Memorial Hospital, the same facility that’s been treating actual patients in Cynthiana since 1907. Same for Cynthiana’s police station. City Hall. Pike Street. Moore says, “Rick’s house was actually my house in Lexington, across the street from Lynaugh’s Pub.”

The Walking Dead comic book earned numerous awards and was adapted into a TV series that debuted on AMC in 2010. Today, The Walking Dead’s estimated global viewership exceeds 200 million. There’s a spinoff, Fear the Walking Dead, plus Kirkman has another comic book–turned TV show, Outcast, airing on Cinemax, and he’s the co-founder of Skybound, described on its website as a “multiplatform entertainment company.” His second longest–running comic, Invincible, is currently being developed as a feature film with Seth Rogen and Evan Goldberg attached to write, direct, and produce.

Living with the dead

“I’ve far exceeded my wildest dreams,” Kirkman says, “so much that I’m embarrassed.” Make no mistake, he’s grateful and enjoying the possibilities open to him, yet he’s leery of thinking too much about his success. Instead, “I try to ignore it. I’m in a constant state of denial.”

“It’s too easy to get distracted. Getting to a certain level (in Hollywood) is hard. Maintaining is harder. The struggle now is to stay relevant.”

And grounded. Kirkman, his wife, Sonia, and their two children moved to Los Angeles in 2011 so he could work on the show, but they try to keep Hollywood at a safe distance. “Robert’s home at 6 most nights,” says Sonia, who’s known him since seventh grade. “He’s just stayed who he is.” The Kirkmans return to Kentucky during school breaks, and recently bought and restored a historic home in Cynthiana that they’ve converted into a bed-and-breakfast. (Read about Ashford Acres.) They also put up money to upgrade equipment at Cynthiana’s Rohs Opera House so the venue could show first-run movies.

Kirkman and Moore returned to Cynthiana last year for the dedication of two highway signs marking their connection to the town and creation of The Walking Dead. The town turned the occasion into Walking Dead Day, a one-time celebration that featured Walking Dead-themed tours of the town, including a stop at Harrison Memorial Hospital. There was a giant Walking Dead mural, and of course, loads of people in costumes.

Kirkman enjoyed the event, which he describes as “surreal.” When it comes to fans’ reactions to the show, he’s learned to take the bad (like death threats when he kills off a character) with the good.

Stephanie McGowan, the library media specialist at Russell County High School, last year started the school’s Walking Dead Club. Its roughly two dozen members include athletes, nonathletes, star students, and some kids who struggle in the classroom or at home.

“The Walking Dead Club gives them all something to have in common,” McGowan says. “They’re really passionate about it. They welcome each other into the conversation. Makes them feel like they’re part of something.”

McGowan and 13 of her students were part of the crowd at EKU for An Evening with Robert Kirkman earlier this year. McGowan says, “I had kids with tears in their eyes, shaking, jumping up and down waiting in line to meet him. I called my principal that night and told her about it. She was so happy that the kids got this opportunity that she cried on the phone.”

Onstage at EKU, Kirkman addressed a question about how he’d fare in the world of zombies.

Just then a voice shouted from the crowd, “We’ll take care of you.”

Kirkman smiled. In his world, the real and the imagined, the living and the Dead come together in unpredictable ways, but it’s a safe bet that should the zombie apocalypse truly arrive one day, Robert Kirkman will not have to walk alone.