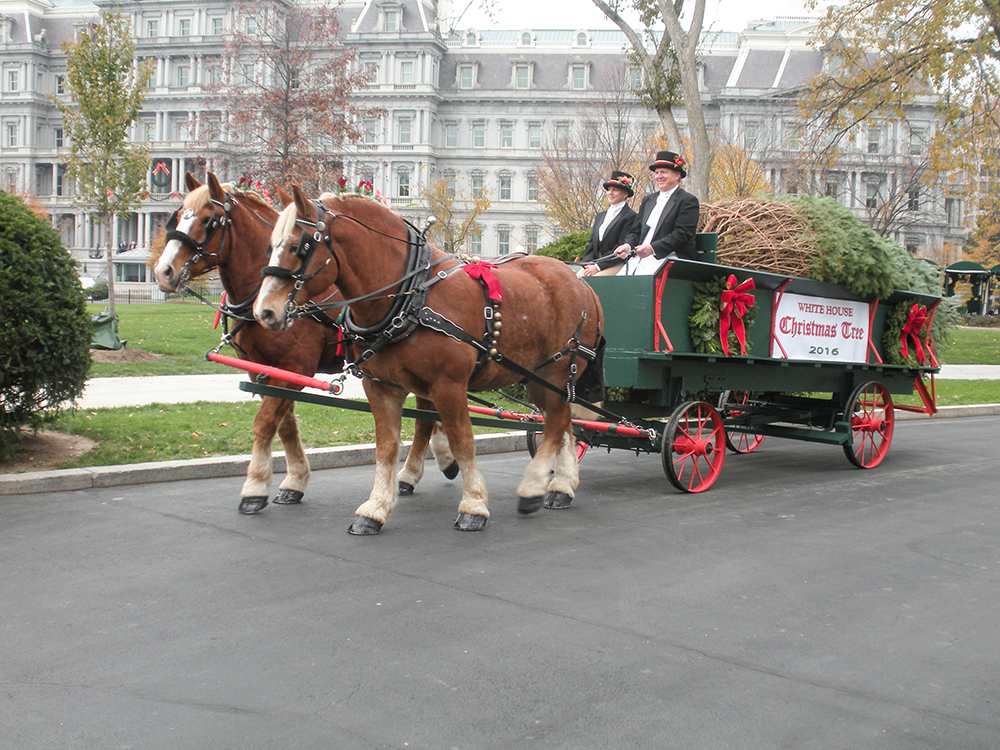 When the festive wagon delivering the official White House Christmas tree pulled up to the North Portico last year, it was drawn by two Belgian draft horses and co-driven by Lisa Harmon Vierstra—of Hart County, Kentucky.

Lisa and husband, Ken, live near Horse Cave in their rambling, two-story home. They have raised their three children here, along with feeder cows, horses, goats, chickens, cats and dogs, and are an integral part of the community. Lisa worked for years for the Hart County Cooperative Extension Service; Ken is employed at the nearby T. Marzetti plant.

In the midst of last year’s holiday season, Lisa was drawn back to her family’s farm at Brandy Station, Virginia, near Washington, D.C., where her mother, brother and sister-in-law operate Harmon’s Hayrides & Carriages, now in their 44th year.

On the Friday following Thanksgiving Day, on November 25, 2016, Harmon’s had the honor of delivering, via a wagon decorated for the holidays and drawn by two draft horses, the official Blue Room Christmas Tree.

Lisa was joined by co-driver John Moore of Herndon, Virginia, who has driven for the Harmons for years. They arrived at the White House security gate with their horses at 8 a.m. sharp.

Once on the White House grounds, Karry, a 19-year-old Belgian draft horse doing his fifth presentation of the Christmas tree, and his partner, 13-year-old Ben, were hitched to the red-and-green wagon that has been specially adapted by Oxon Hill Farm, part of the National Park Service, to carry the huge tree. The horses’ manes and tails were braided. Their manes were flagged in red and green, with red bows on their tails and on the harness.

Promptly at 10 a.m., Vierstra and Moore, sporting top hats and formal driving attire, drove Karry and Ben around the White House drive to arrive at the North Portico. There, while the Marine Band played O Christmas Tree—aka O Tannebaum—then-first lady Michelle Obama, accompanied by her two nephews, Austin and Aaron Robinson, and the Obamas’ two Portuguese water dogs, Bo and Sunny, formally accepted the tree. With them were Dave and Mary Vander Velden of Whispering Pine Tree Farm in Oconto, Wisconsin, who were named the 2016 Grand Champions in the National Christmas Tree Association’s Christmas Tree contest.

Watch as Lisa Vierstra, of Hart County, Kentucky, and John Moore handle the reins as they guide the Belgian draft horse-pulled wagon for the arrival of the 2016 White House Christmas Tree, November 25, 2016, to the delight of then-first lady Michelle Obama and her two nephews.

“It is a tremendous honor for the Christmas tree industry to provide the White House Christmas Tree each year. The tradition began in 1966 and we are pleased that that tradition continues,” says Marsha Gray with the National Christmas Tree Association.(While the association once again provided the official Christmas tree to the White House this 2017 holiday season on November 20, 2017, the Harmon’s and their horses will not deliver the tree this year due to scheduling.)

The final 2016 Blue Room tree was a 19-foot Douglas fir grown in Pennsylvania. A tree grown by the Vander Veldens also was displayed in the White House Garden Room.

After the time-honored presentation at the White House, the tree was immediately carried into the Blue Room where volunteer decorators awaited. Volunteers decorated the Blue Room tree to honor the U.S. military. The decorators worked around the clock to have the tree and the White House public rooms ready for her to host military families for the first look at the décor.

From Virginia to Horse Cave, Kentucky

Lisa Vierstra’s father, Jack Harmon, retired during the Reagan administration after a lifetime of service with the federal government that spanned several agencies. He then started his second career at his farm in Centreville, Virginia, his base for providing Belgian draft horses for public activities.

“His first team was named Dunn & Bradstreet,” Lisa says. “Then Dad’s second team was named Briggs & Stratton.” They were named by Lisa’s brother Steve, because at 2 years of age, they were like “little engines,” she says.

Then came Dow Jones, then Smith Barney and others.

“Wagons and carriages were added to the business,” Lisa says. Her father even modified a carriage into a bier, (or quasi hearse) with an elegant rack atop the carriage, on which to place the casket, and then draping that with a black decorative mantle. “Following the burial, Dad returned it back to its carriage form and function by removing the bier,” she explains.

Lisa says her father had always been a horseman, showing horses, and hunting on them for years. “He learned the intricacies of harnessing draft horses from a neighbor we had who was expert in that, and also just by hours of practice. He learned how to form a team by matching the pair, not only in color, but also in temperament.” He regularly switched the positions of a pair to make them more adaptable.

“Midge, my mom, handled the booking and scheduling, while my brother Scott and my sister-in-law, Sue, helped with the driving and training. After Dad died in 2002, Mom, Scott and Sue took over the operation, which they moved to a 126-acre farm at Brandy Station, Virginia,” Lisa says.

The Vierstras also had a dairy operation in that area, but eventually sold that farm and moved to Horse Cave in 1995, to continue dairying for the next 11 years before selling that operation.

Lisa now runs her own carriage business near Horse Cave with the aid of her youngest daughter, McKenna. They do weddings, Santa’s arrivals, parades or any special event that a horse-drawn vehicle enhances. Sally, a Haflinger mare trained by Lisa’s father, is one of the mainstays of the company.

Still, the most delightful occasions of Lisa’s year are those two or three times when she returns to Brandy Station to visit her family and all those huge, handsome, well-groomed steeds.

And surely the highest point of all was when she and John Moore drove up to 1600 Pennsylvania Avenue with the Yuletide evergreen in tow.

Since 1966, the winner of the National Christmas Tree Contest has presented a farm-grown Christmas tree to the White House for display in the Blue Room or other rooms. For 2017, the tree was presented by Grand Champion winners Jim, David and Diane Chapman of Silent Night Evergreens in northern Wisconsin. The Chapmans provided trees to the White House in 1998 and 2003.

“We are so honored to be selected again as National Grand Champion,” says Diane Chapman. “Being a guest of the White House should only be a dream for small farmers like us, and we are very excited about our trip to Washington.”

The contest is sponsored by the National Christmas Tree Association. In case you’re wondering, no Kentucky grower or tree has ever won the honors in the contest’s 50-plus-year history.

The association’s mission is to protect and advocate for the farm-grown Christmas tree industry. Its website, www.realchristmastrees.org, has care tips and a tree locator to help you find a live tree near you.