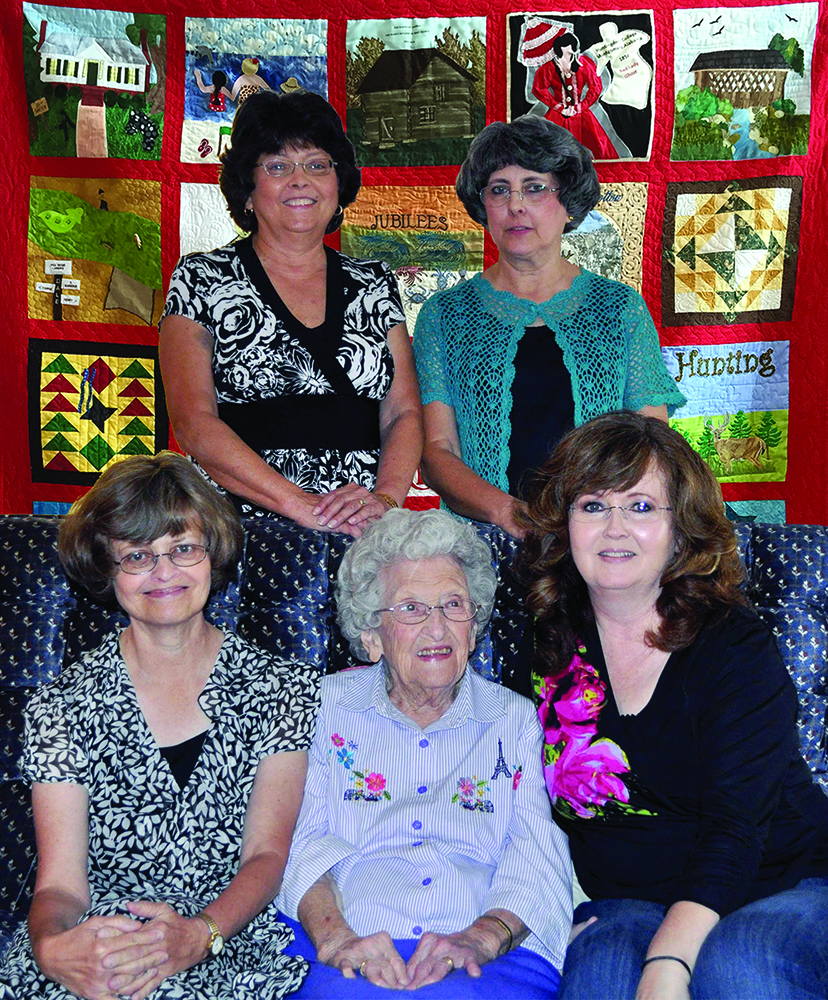 Mrs. Thelma Bradley is surrounded by her daughters, from left, Judy Howard of Bluegrass RECC; Mary Conn of Missouri; Linda Partin of Montgomery, AL., and Joan Bishop of Versailles.

Linda Partin, a Kentucky native and longtime employee at the Alabama Rural Electric Association (publisher of Kentucky Living’s sister publication, Alabama Living), conceived the idea for a statewide quilt contest in 2000. She’s organized the biennial event ever since, and last year’s competition held special meaning for her. Linda’s mother, Thelma McBrayer Bradley of Lawrenceburg, and a member of Blue Grass Energy, passed away July 3, 2016, just 25 days short of turning 99. Sixteen years ago, when Linda first told her mother about her idea for a quilt contest, Mrs. Bradley was happy to help her get it started.

“She told me how many squares, what size they needed to be, and all of the particulars,” Linda remembers. “She always wanted to know what the theme was and how it was going. She was so proud that I was able to meet two Alabama first ladies through this project and she was so, so much a part of this project.”

But after her mother’s funeral, Linda found it hard to get started on the contest prep for last year. “It was too hard,” she says. “It was too much entwined with her. As I was getting ready to cancel the program for (last) year, I prayed, and cried, and decided what better way to honor her, than by doing this ninth quilt in her memory and in honor of all our hardworking moms. I called my sisters, and they all thought it was a wonderful idea!”

Helping in the healing process for others

So the theme, “In Honor of Mom,” was chosen. “(Last) year’s quilt project is probably doing more to help in my healing process than anything I could have done,” Linda says. “And, I am finding out from some of the quilters that it is doing the same for them. As they call and write, I am getting comments like, ‘Working on this helps me remember times I spent with my Mom,’ and ‘Thank you for doing this. My Mom was a quilter and she can’t do it anymore, but she taught me.’ One lady said she is making her quilt square from some of her mother’s clothing.”

Quilting has a long tradition in Linda’s family. Mrs. Bradley, who was born on a family farm in Rowan County, near Morehead, quilted with her own mother. “My grandfather built a quilting frame that could be raised to the ceiling when they weren’t working on it and lowered so that they could work on their latest quilt whenever they had the opportunity,” Linda says. “When she was a little girl, she and her mom would get up before daylight. They had no electricity, so they couldn’t wait until the sun came up and they could lower the quilt frame and work on the quilt.

“All my life, mother kept us in quilts, and one of the most fun things to do was to sit and listen to her tell us stories of when she grew up on the farm and sit on the quilt, looking at the different fabrics and pick out the ones that were made from scraps of my dresses. She had four little girls and made all our clothes. A professional seamstress, she owned a dress shop before I was born, made many of her nieces’ wedding gowns, her daughter’s wedding gowns, she upholstered furniture, and she even made a car top at one time.

“Today, quilting is an art-form, but it was a way of life then. She came from a family of eight and no central heat and no electricity and quilts were for warmth.”

Linda says her mother was “always working on something or other and most of the time I didn’t even know what it was. In her older years, she crocheted lap throws for the elderly (who were younger than she was) to be used on wheelchairs. When her hands became so twisted with arthritis that the lap throws took too long, she started crocheting baby caps for an organization called Newborns in Need. She made close to 400 lap throws and more than 3,000 baby hats.”

Mrs. Bradley was honored for her contributions to her community with the “Outstanding Citizen of Fayette County” award in 2009, and she was designated a Kentucky Colonel the same year.

Besides organizing the AREA quilt contest, Linda herself makes quilts for her own six grandchildren, including a now 3-year-old, who was set to have his quilt finished this year.