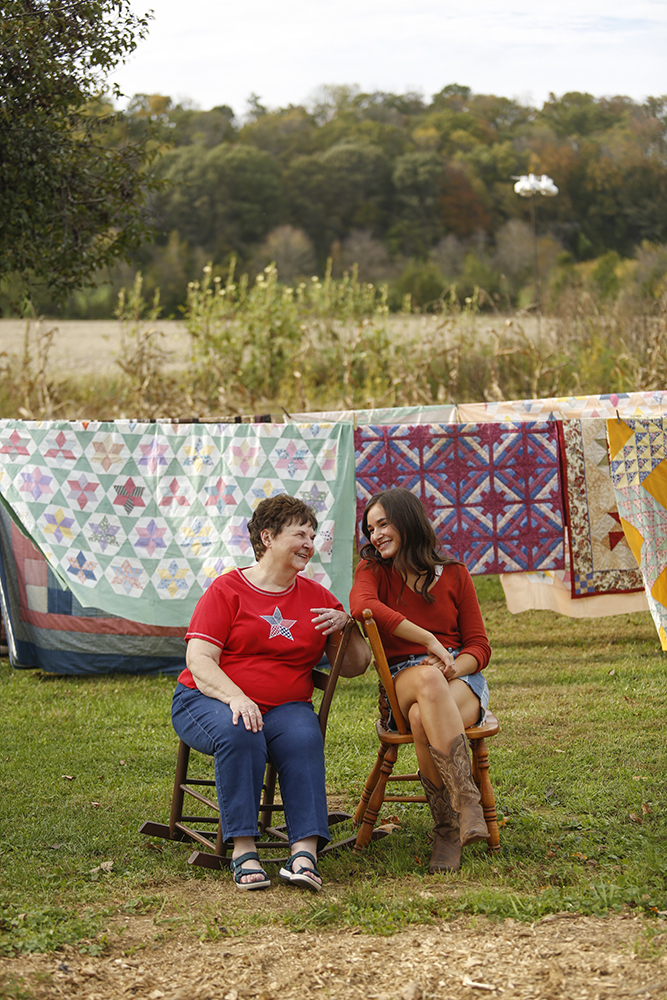 Readers wrap us in their comforting quilting tales

Abbey Daugherty is not your typical teenager. At 16, she has interests that many in her age group might call old-fashioned. She is an accomplished baker, making pies with skill and precision. But a few months ago, when her mother asked how she planned to spend her summer break, Daugherty did not hesitate: “Learn to make a quilt!” She wanted to learn the craft from the very best—her 78-year-old grandmother, Edith Judd, member of Salt River Electric, who lives nearby in Taylorsville.

“I was thrilled,” her mother, Nancy, recalls. “And her grandmother was definitely thrilled.”

The pair came up with a plan: they would work one full day each week. Daugherty’s lessons commenced with the popular Star Flower pattern—blocks of eight-pointed starbursts, with the points on each block pieced in an alternating color scheme. Daugherty was a natural, and the duo completed the quilt in only three weeks. “She loves showing everybody the quilt,” her mother says, “and she’s ready to make more.”

But perhaps more than her newfound skill, Daugherty appreciated spending time with her grandmother, hearing old family tales and making new memories that she will one day pass on herself.

Daugherty’s experience is a familiar one to many Kentuckians, who have for over two centuries passed on the quilting gene to successive generations through long afternoons spent in patient instruction, practice and storytelling. Several months ago, Kentucky Living asked readers to share their quilting stories. We received dozens of submissions, with each detailing a beautiful memory of this tradition that stretches from Pikeville to Paducah—home of the National Quilt Museum—like a colorful quilt top. Here are a few of those stories.

Covered up in quilts – Click on a box to read even more quilt stories from our readers:

Every Wednesday afternoon, Marcella Goodin, 66, member of Nolin RECC, makes the 15-minute drive from her home in Rineyville to the Colvin Community Center in Radcliff, where she spends two hours quilting with four other women. Pins and Needles, the group calls itself, and one afternoon Betty Calvert, another member, had an ambitious idea. She had seen a state quilt in a magazine and thought she and her four compatriots might do the same for Kentucky. They agreed, and the group spent the next two months designing a pattern featuring all 120 of the commonwealth’s counties and choosing landmarks to highlight.

The major universities—Kentucky and Louisville—were depicted. Basketballs and footballs were used to represent the other colleges. Churchill Downs was shown in an homage to horse racing, and the military bases of Fort Knox and Fort Campbell received a patriotic theme. A stark, black-and-gray color scheme was used to designate eastern Kentucky’s coal-producing counties, and one group member found material designed to resemble water to use for some of the state’s lakes and rivers.

“We had two of us cutting out (material),” Goodin explains. “One lady was ironing all the pieces, and then we appliqued it on the map we had (traced) of Kentucky.”

A volunteer quilted around each of the 120 counties, and then the entire perimeter of the quilt. The group donated the finished, 6-by-3 quilt to the community center in appreciation of their meeting space.

Sandra Woodard of Hopkinsville, member of Pennyrile Electric, is the seamstress in her family, a designation that means she will one day inherit an artifact priceless in sentimental value. Her 91-year-old mother-in-law, Jane McMillen Woodard, has promised her a “friendship quilt” made by the elder Woodard’s grandmother in 1893. The white quilt, yellowed ever-so-slightly with age, features the first names of family members stitched in an elegant cursive with scarlet thread. Beneath each name is a significant year in the person’s life, and both are circled by a curling flowering vine. According to family lore, the heirloom was entered several times at the Kentucky State Fair quilt competition and always won a prize.

Thirty years ago, Annette Akridge Jefferson’s mother also had preservation on her mind. A child of the Great Depression, she took a utilitarian approach to life—some things were too valuable to waste. When she found some old polyester clothing her family had worn in the 1960s and 1970s, she decided to put it to use in a crazy quilt.

“My dad’s plaid jacket—he’d wear that to church on Sunday,” explains Jefferson, member of Taylor RECC. “My favorite polyester dress—it had little mushrooms on it, and I can think of the different times I wore that in high school. Mom’s floral housecoat. It’s just a lot of memories.”

Jefferson hangs the festive quilt on a rack throughout the year at her Campbellsville home, but at the holidays, it takes pride of place. When her five siblings gather to celebrate Christmas, talk inevitably turns to the quilt. “It triggers a lot,” she says.

When Judy Hobbs, 68, member of West Kentucky RECC, a longtime quilter from Mayfield, sees her favorite quilt, she remembers the two furry family members who inspired it: Bo, a pit bull mix, and Dixie, a Labrador retriever. She observed age creeping in on the pair, and she wanted to make something to serve as a constant reminder of her “loving companions.” Working from photographs of each  dog, Hobbs traced their outlines on a transparency and magnified it with an overhead projector. Then, using varying shades of brown for Bo and dark grey for Dixie, she used the stained-glass method to piece her quilt, which allowed her to show fine details of lines and muscle. One week after she finished, Dixie died. “Of all the quilts I’ve made,” Hobbs says, “this one holds a special place in my heart.”

Jamie Young, 46, member of Inter-County Energy, describes herself as “both proud and upset” when her son Cole announced that he had joined the U.S. Marines, so she turned to her craft for solace. The Danville resident had made 14 handmade quilts for members of her family, but this one would be different. “I decided to make myself a quilt,” she explains. “I told my friends and family I was making a quilt I could crawl under and cry when I was missing my son.”

Young began her project the week Cole enlisted. She selected a log cabin pattern and a patriotic color scheme of red, white and blue. “Every time I had an extra few minutes or hours I would work on my quilt,” she says. Young finished it while he was at boot camp. “It gave me comfort and made me feel like he wasn’t so far away.”

Eighty-three-year-old Nancy Allen of Lawrenceburg, member of Blue Grass Energy, holds especially close what she calls her “memory quilt.” The striking quilt, which features the intricate Dresden Plate pattern, was pieced from scraps of men’s boxer shorts salvaged by her maternal aunts from the garment factory where they worked in Frankfort. Their mother—Allen’s grandmother—began piecing the quilt, but it remained unfinished when she died. Years later, Allen and her sister finished the top and turned it over to their mother to quilt by hand. Allen is now the only surviving member of the three-generation guild and says of their quilt, “I wouldn’t trade it for anything.”

Like Allen, young Abbey Daugherty is already planning her next quilting project—and this one will include her mother. After Abbey began quilting, Nancy Daugherty followed her lead and asked her mother for training, too. Now three generations of their family plan to complete a quilt top begun by a fourth—Abbey’s great-great-grandmother.

“We’re very nostalgic,” Nancy says. “There’s the story (that) goes with (quilting). You can pass it down and say, ‘Oh, my great-grandmother worked on this and I worked on it.’ It’s just great to have that history with the story of the quilt.”

Jason Howard is the author of A Few Honest Words: The Kentucky Roots of Popular Music. His work has appeared in the New York Times, Oxford American, Salon, The Nation, and on NPR.