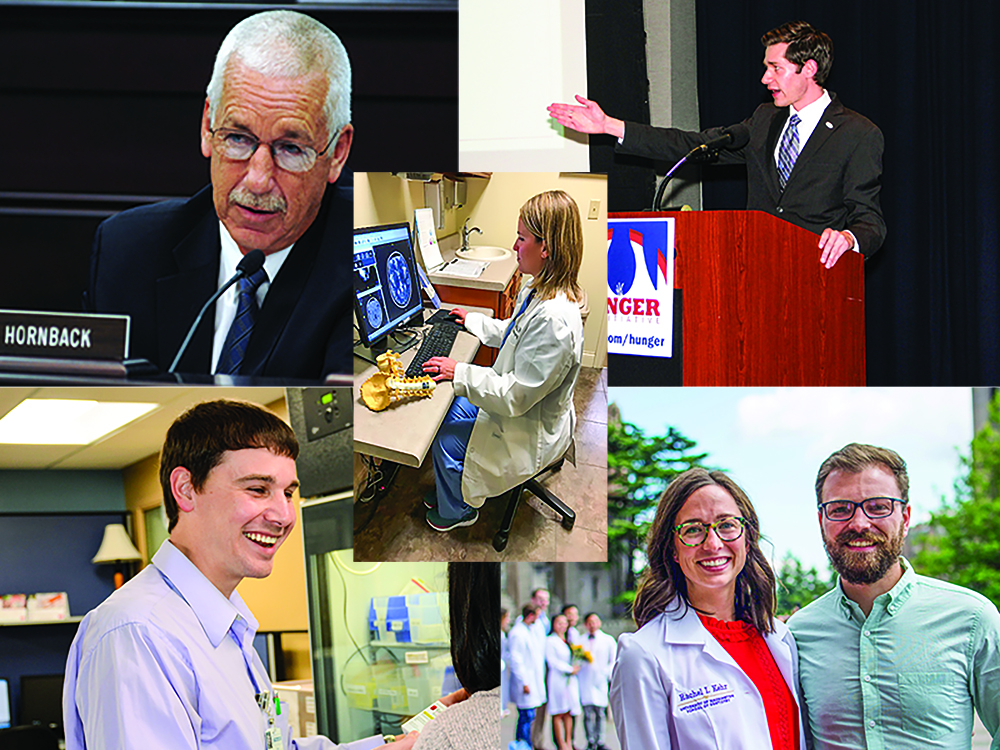 Washington Youth Tour alums use trip as springboard for their futures

Compelling. Amazing. Life-changing. That’s how former Kentucky high school students describe the Washington Youth Tour, an annual weeklong trip to the nation’s capital that has been sponsored by Kentucky electric cooperatives since 1972. Now members of their communities, they recount how the tour shaped their minds and impacted their future.

The Washington Youth Tour was still in its infancy when 61-year-old Paul Hornback, a Republican Kentucky state senator, made two summer trips as a Shelby County High School student in the early ’70s, but he still recalls how the experience sparked something that made him determined not to sit on the sidelines of life. He learned that his voice could make a difference.

“I remember being in awe, especially when I walked into the Capitol and saw the size of the building,” Hornback says. “I got to see how these senators and congressmen were interested in making the country a better place, and I wanted to be a part of that.”

When he returned home to his Shelbyville farm, he hit the books, determined to delve deeper into American politics, history and government. He resolved to further educate himself about policymaking and the process of passing new laws.

When he got the chance to serve as a volunteer lobbyist in Washington years later, he was ready. For decades, he advocated for policies that benefited his fellow farmers, and in 2010, he decided to take his diplomatic skills and years of knowledge to the next level by running for a seat in the Kentucky Senate, which he won.

“I wasn’t happy with the way things were going in Kentucky or D.C.,” he explains. “I felt some elected officials were looking out for their own self-interest. I wanted a better future.”

“That whole week was a whirlwind,” Keny Craig recalls of his 2004 trip sponsored by Nolin RECC in Elizabethtown. “The thing I remember most is hearing Congressman Jim Bunning speak at the Capitol. Here was this famous athlete, but he was really just an ordinary guy driving home the message of becoming engaged citizens and the importance of being part of the greater good, just as the co-ops are.”

The late Bunning, a Baseball Hall of Fame pitcher, was a conservative Republican who served six terms in the United States House of Representatives and then two terms in the U.S. Senate.

Craig has always had an aptitude for math and science, and a major advantage of the tour was meeting like-minded students focused on academics and higher learning.

Today, he lives in Elizabethtown with his wife, Michaela, a physician assistant, and works as a pharmacist in nearby Bardstown.

The couple also just started a Cruise Planners franchise, turning a passion for travel into a side business.

“Travel supplements the entire wellness of a person, which augments our medical background, when they can relax and recharge away from the daily stresses and expose themselves to new sensory adventures,” Craig says.

He recently got to relive some of those long-ago Washington trip highlights with younger participants who are members of his church. He recounted visits to historic landmarks, such as Ford’s Theatre, the site of President Lincoln’s assassination; and the Washington National Cathedral, an architectural marvel of carvings and stained glass. A sobering excursion to the United States Holocaust Memorial Museum is forever etched in his mind.

Craig says he’s pleased to know future generations will have the same eye-opening journey that he had, thanks to Kentucky’s electric co-ops.

Sean Southard, the director of communications for the Kentucky Department of Agriculture, says being a 2010 tour delegate representing Kenergy Corp. in Owensboro was a turning point in his life.

“It was a coming-out-of-my-shell moment,” Southard says. “I was kind of nerdy, but my time in Washington, D.C., helped me be confident, learn that somebody like me could take part in that experience.”

Confident enough to apply as a McConnell Scholar at the University of Louisville, in fact. During the Washington Youth Tour, Southard met the scholarship’s namesake, Sen. Mitch McConnell, then the Republican minority leader. He interned at his Washington office during the summer of 2014 while he was working toward undergraduate degrees in political
science and history at the University of Louisville.

When he looks back on the tour, he still has vivid memories of strolling among the imposing marble monuments and landmarks that embody the ideals of America’s Founding Fathers.

“One thing that stands out in my mind is the opportunity to see the Declaration of Independence in the National Archives Museum,” Southard says. “Obviously, as a student of history and political leadership, seeing that document was absolutely astounding.”

He implements the lessons he learned about leadership and advocacy every day at the Kentucky Department of Agriculture.

He’s especially proud of his role in promoting the Kentucky Hunger Initiative, a program launched by Agriculture Commissioner Ryan Quarles in 2016 to decrease food insecurity among Kentuckians by creating a partnership among farmers, government, charitable groups and faith-based organizations.

Sarah Todd-Godbey, now a neurosurgery physician assistant in Somerset, had the honor of being the one student selected to represent the Youth Leadership Council on her 2004 tour sponsored by South Kentucky RECC. A poignant, well-written essay won her the coveted position.

As a shy, introverted teen, she found the benefit was immeasurable.

“It gave me a push outside of my box to share opinions that may not be the opinions of others,” Todd-Godbey says.

Honing her communications skills served her well during her time at Georgetown College and beyond. For a physician assistant, effective communication with patients is imperative.

In Washington, she met other students who planned to pursue careers in medicine. They soon formed a strong comradeship that got them through those challenging university years.

“We encouraged each other along the way,” Todd-Godbey says. “It’s good to have other students walk alongside you.”

Rachel Ison Kehr grew up in Greenup, a small community in the Appalachian Mountains, but she was always aware there was a great big world beyond her hometown.

When Grayson RECC offered her the chance to be a representative on the 2009 tour, she packed her bags, ready for the biggest adventure of her young life.

Kehr was captivated by the numerous attractions, but what left an indelible impression was the changing of the guard at Arlington National Cemetery.

“It was somber, something that makes you appreciate the country we live in. It’s one of those things you hear about, but until you are there, you don’t get the emotional connection,” she says.

Today, Kehr is a dental student at the University of Washington in Seattle.

“It put the travel bug in me,” Kehr says of the tour. “Kentucky is wonderful, but the experience opened my mind to the scope of what the rest of the U.S. and the world has to offer.”

Kehr attended Centre College in Danville on a prestigious Brown Fellows scholarship, which included a summer enrichment program that took her to Cambodia and Vietnam.

As a pre-dental student, she was part of a team that went on a mission trip to Hyderabad, India, to educate local caregivers on how to provide improved dental care to rural Indian communities.

But Kehr knows it’s not just developing nations that have populations suffering from substandard oral care.

She was inspired to pursue a career in dentistry with a specialty in endodontics because, growing up in eastern Kentucky, she saw firsthand the results of unmet dental needs.

“A lot of adults I knew had dentures by a very young age,” Kehr says.

She’s unsure where her career will take her, but she says practicing in a small Kentucky town isn’t out of the question.

“Kentucky will always be home,” she says. “I’m not opposed to moving back.”

Are you an alum?

Let us hear from you if you went on one of the Kentucky Washington Youth Tours. Go to Contact Us, and tell us about your memories, your profession, and what you are doing now.

A letter from an Owen Electric alumna

I am a Washington Youth Tour alumna. I won my place as an Owen Electric representative through a quiz and essay competition in 1973. It was a great trip with a fun and friendly group. I still enjoy looking through my photos and reading through my autograph book.

The week had a number of highlights for me, including lunch between Smithsonian museums where participants encouraged me to talk because they liked “my accent!” (I still maintain that we in northern Kentucky are not the ones with an accent.) We met Julie Nixon Eisenhower before our White House tour and Kentucky’s congressmen before breakfast. The one stop that has always stuck with me was the visit to the Australian Embassy where we heard that Australia was working with the U.S. to encourage a seat belt law because of the fantastic reduction in accident fatalities, since passing the law in their country.

I returned to Alexandria less shy than before. I graduated from Campbell County High School the next year and completed a B.S. in math and physics from Morehead State University four years later. I’ve spent most of the years since as a consulting pension actuary in Louisville. I moved back to Alexandria last year and joined many in my family as an Owen Electric cooperative member.