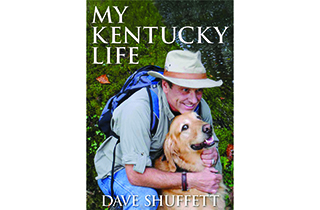 No matter how long one lives in a certain place, there are always new things to learn about that place.

Kentucky is no exception with its treasure trove of hidden gems, storied towns, and more than a few tall tales that beg to be discovered. Dave Shuffett has spent 25 years exploring Kentucky’s secrets, sharing them with viewers of his KET series Kentucky Life and with readers of Kentucky Living‘s Great Outdoors column. His first book, My Kentucky Life (Butler Books, $25, www.butlerbooks.com), chronicles some of his favorite essays and photographs from his travels.

Shuffett promises this is only a start.

“There are too many pictures and stories for one book, so I’m calling this Volume One of a series,” he claims. “No region of the state will be left out as I continue my travels and complete more books.”

Covering topics such as Kentucky wildlife, seasons, history, and culture, this first effort is a delight to both the eye and ear due to Shuffett’s gift of storytelling and talent with a camera.

Shuffett, born and raised in Greensburg, is a nine-time Emmy Award nominee for on-camera performance and television producing, and in 2005 was the winner of a national Telly Award. He feels he inherited his love of the outdoors from his father, who was also an avid outdoorsman and fisherman. As a boy, he could often be found fishing the Green River with his dad and uncle or in the woods observing the wildlife around him. His boyhood interests still resonate deeply within him.

“When I paddle a remote stream or walk in the deep woods, I experience a reconnection with old truths buried somewhere in all of us,” Shuffett says.

Like his beloved state’s endless winding roads that he travels, Shuffett plans to keep going, closing his book by saying, “Through books, magazines, and television, I’ll gladly tell you the stories I found ’round the last bend. Stay tuned for Volume Two.”