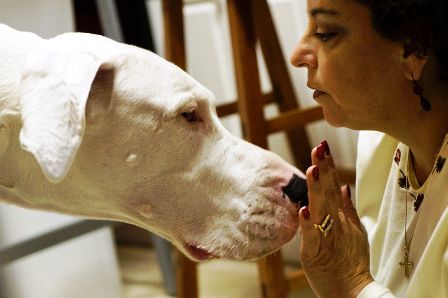 Luminos gets a "psychic checkup" from Latifa. Photo: Latifia Meena

I cried with relief. Radar was a dog I’d had to euthanize; it was, needless to say, a difficult decision. The animal communicator I talked to was still in training, not ready to go public, and admitted she was a bit fuzzy on some details, but on these points she was adamant. I was greatly comforted with her words, and I’ve learned even more about Radar since that conversation.

Whether you believe in animal psychics or not, it’s become hugely popular with pet owners. One of the best-known psychics is right here in Kentucky. Her name is Latifa Meena, and her ability has brought her an inordinate amount of publicity, both locally and nationally. Once a skeptic herself, she says, “Nobody’s more surprised than I am that I’m doing this.”

Vivacious, energetic, and charismatic, Latifa doesn’t “look” like a psychic—she’s one of anybody you’d pass by and not notice anything different about her. Interviewing her was a hoot: while we talked, she would occasionally turn her head, appearing to be talking to herself for a moment before returning to our conversation. I finally asked her about it.

“Oh, Radar’s here with us. He keeps interrupting, I’m asking him to be quiet so we can talk.”

As if I wasn’t shocked enough, she reiterated what the other communicator had said about Radar: “No, he doesn’t want to talk about his life before he came to live with you; it’s in the past, it doesn’t matter anymore.”

Latifa, a resident of Louisville, has developed a reputation for helping many people with their animals; sometimes there is a behavior problem, there may be something physically wrong, or perhaps she just does a “psychic checkup.” Whatever the issue, she’s helped many clients all over the country and even the world.

When contacting an animal, whether it is alive or has passed on, she usually first studies a picture of the animal to help her connect to that animal’s energy. Animal communication is a “telepathic mind-to-mind universal language,” and it can come in many forms, for her and for owners who learn to make contact.

“Contact can be made by seeing, hearing, feeling, or intuitive knowing.”

Latifa’s introduction to reading animals started with a horse.

“I was having trouble with a Quarter horse I was showing. When I couldn’t fix the problem, someone suggested I bring in a communicator. I laughed at first, then thought why not give it a try? That’s when I became a believer; the communicator walked down the aisle of the barn, talking to the horses, and told me things about them she couldn’t possibly have known.”

“After a lengthy career in IT and the experience with the animal communicator at the barn, I found myself communicating with animals I did not know at various IT jobs. After receiving validation, I realized I was being led to do a greater service with the animals. I then began this journey.

“When this metaphysical world opened up to me, it was a real lifestyle change. I can’t be ‘psychic’ all the time, I had to learn to control it. I’m still learning.”

Latifa subscribes to a strict code of ethics when talking to animals: “I never talk to an animal unless I have both the owner’s and the animal’s permission. I believe you must be respectful, thank them, and let them know you honor them.”

Sometimes simple respect is all a pet wants, as was the case of Stella, a Bichon Frise raised by Wendy Ball of Somerset.

“Stella was a show dog that didn’t want to be a show dog.” Wendy says. “When the people who bought her brought her back to us, we had Latifa talk to her. Stella said she was unhappy being in a kennel: that’s part of show life, and she didn’t like it. Stella cussed a lot, and demanded that her kennel be called her ‘happy place.’ From then on, she willingly went in, but never if we called it a kennel.”

When Jasper, another puppy of Wendy’s, was returned for peeing on the couch, a session with Latifa revealed what was going on: Jasper was mostly kept by himself in his crate by his owners. They didn’t play with him, and they traveled a lot. Jasper was mad, he simply wanted some attention. He was placed with Wendy’s pet sitter, and has been fine ever since.

BarryAnn Ratliff Waddle has consulted with Latifa many times over the years. A resident of Shelbyville, she says though she’s always been open-minded, Latifa was the one who convinced her the metaphysical world is real.

“Latifa is really helpful with my dogs if they aren’t feeling well,” she says. “She can find out if something is actually wrong, if the dog needs to go to the vet, and generally, the vet confirms something indeed was wrong.” BarryAnn also learns secrets: during a session, Latifa found out from Bonnie, a fox terrier, that “Daddy kisses me every night before he crates me.” Even BarryAnn didn’t know that.

Some of Latifa’s work deals with death and the dying process. She’s given comfort to a lot of people when she tells them sometimes it’s best to let an animal go.

That happened to Amy Knipp of Louisville. She and her rescue group took in three pit bulls that had been fighting dogs. They spent a lot of time, money, and heart trying to rehabilitate these dogs so they could become adoptable. But the dogs only regressed—there had been too much trauma in their lives.

Finally, the rescue group contacted Latifa, who talked with these dogs. What she found out greatly surprised the group.

“No one wanted to make the decision to put these dogs to sleep,” Amy says. “But the dogs told Latifa they wanted to go, they were ready to cross the bridge. They weren’t happy here, and knew there was something better across that bridge, that it was okay to let them go.

“Despite the pain of letting the boys go, we held tight to Latifa’s words that the boys loved us all for trying to help, that they knew people were fighting for them and loving them.

[pullquote cite=”Latifa Meena” type=”right”]”In my experience, most animals are relieved and grateful to be crossing to the other side where they are whole, free, and healed.”[/pullquote]”Latifa’s help brought peace to everyone’s heart.”

Latifa has helped many an owner struggling over whether to euthanize a pet, usually because of age or illness. To make matters worse, once the decision has been made, many times the pet appears to rally just days or hours before that trip to the vet. It’s agonizing to the owner, but Latifa explains that what the animal is feeling is joy and relief to be crossing.

Latifa’s world is a bit weird, a bit wacky, and a whole lot of wonderful. I’ve since learned to know when Radar is around, why he himself rallied before going to the vet, and the messages I was missing, I discovered, were coming through my new dog, Oscar. It’s been a tremendous comfort.

So I’m confident that many will agree when I say, “Thank you, Latifa.”

To learn more about Latifa’s process of communication or to schedule a session, contact her at www.animalscantalk.com or call (502) 641-4119.